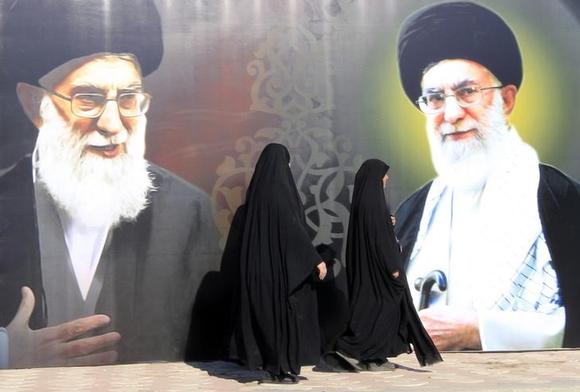 (Reuters) – Iran’s supreme leader said on Sunday he could accept a compromise in nuclear talks and gave his strongest defense yet of President Hassan Rouhani’s decision to negotiate with the West, a policy opposed by powerful hardliners at home.

As his foreign minister met counterparties in the talks at a conference in Munich, Ayatollah Ali Khamenei said he “firmly” backed a fair nuclear deal.

“I would go along with any agreement that could be made. Of course, if it is not a bad deal. No agreement is better than an agreement which runs contrary to our nation’s interests,” Ayatollah Ali Khamenei told Iranian air force personnel, according to official news agencies.

In a speech that still underlined his suspicions about Western nations that he characterized as “bullies”, Khamenei backed Rouhani’s negotiations with them and said any workable deal would mean both sides easing their demands.

“As the president said, negotiations mean reaching a common point. Therefore, the other party … should not expect its illogical expectations to be materialized. This means that one side would not end up getting all it wants.”

“I am for reaching a good settlement and the Iranian nation too will certainly not oppose any deal to uphold its dignity and integrity,” Khamenei said, an apparent warning to hardliners that they might have to accept a deal with powers including the United States, commonly known in Iran as “the Great Satan”.

Negotiators have set a June 30 final deadline for an accord, and Western officials have said they aim to agree on the substance of such a deal by March.

In Israel, Prime Minister Benjamin Netanyahu, who will address the U.S. Congress on Iran on March 3 — to the annoyance of the Obama administration — said: “We will do everything and will take any action to foil this bad and dangerous agreement.”

“World powers and Iran are charging ahead to an agreement that would allow Iran to arm itself with nuclear weaponry, something that would imperil the existence of the State of Israel,” Netanyahu told his weekly cabinet meeting.

The nuclear talks with the United States, Russia, China, Britain, France and France are aimed at clinching an accord that would ease Western concerns that Tehran could pursue a convert nuclear weapons program, in return for the lifting of sanctions that have ravaged the Iranian economy.

Major sticking points are the pace at which sanctions would be removed, the size of Iran’s nuclear fuel-producing capacity — a key consideration in preventing any output of bomb material — and the length of any agreement.

“Our (nuclear) negotiators are trying to take the weapon of sanctions away from the enemy. If they can, so much the better. If they fail, everyone should know there are many ways at our disposal to dull this weapon,” Khamenei said.

Any deal “must be concluded in one stage and consist of clear and detailed specifications, and not subject to (various) interpretations,” he said.

“Given our past experience in dealing with the (West), a final draft must not leave any room for the other side to repeatedly extract concessions.”

“I believe the entire Iranian population understands that this government, that Dr Rouhani, his administration and the government in its entirety supported our efforts in the negotiations,” Zarif told a security conference in Munich where he met counterparties in the negotiations, in what he called a “very serious discussion”.

“Everybody has taken every necessary measure to make sure we succeed. All Iranians know this. If we fail, and I hope we won’t, they (Iranians) will not consider us responsible for that failure. They will consider attempts (to ask) too much from Iran as a reason for failure.”

Zarif said it was in everyone’s interest to seal an agreement by the June 30 deadline, but added: “I don’t think if we don’t have an agreement it will be the end of the world.”

U.S. Senator John McCain, a hawkish Republican, warned in Munich that while Iran was negotiating now, its underlying goal was “to drive Western influence out of the Middle East”.

DUBAI/VIENNA Iran’s supreme leader Ayatollah Ali Khamenei said on Tuesday Iran would need to significantly increase its uranium enrichment capacity, underlining a gap in positions between Teheran and world powers as they hold talks aimed at clinching a nuclear accord.

Iran and six major powers – the US, Russia, France, Germany, China and Britain – have less than two weeks to bridge wide differences on the future scope of Iran’s enrichment programme and other issues if they are to meet a self-imposed July 20 deadline for a deal.

They resumed talks in Vienna last week and their negotiators continued meetings in the Austrian capital on Tuesday; but there was no immediate sign of any substantive progress.

Iran insists it needs to expand its capacity to refine uranium to fuel a planned network of atomic energy plants. The powers say Teheran must sharply reduce the capacity to prevent it being able to quickly produce a nuclear bomb using uranium enriched to a far higher degree.  “Their aim is that we accept a capacity of 10,000 separative work units (SWUs), which is equivalent to 10,000 centrifuges of the older type that we already have. Our officials say we need 190,000 SWU. Perhaps this is not a need this year or in two years or five years, but this is the country’s absolute need,” Khamenei said in a statement published on his website late on Monday.

An SWU is a measurement of the effort necessary for the separation of isotopes of uranium.

Iran says its programme is for civilian purposes such as electricity generation and denies any ambitions to build an atomic bomb.

Iran expert Ali Vaez said the negotiations were now at a precarious stage.

Last week, other Western diplomats said Iran had reduced demands for the size of its future nuclear enrichment programme in the negotiations, although Western governments were urging Tehran to compromise further. They did not give details.

Separately, France’s foreign minister hinted at divergences between Russia and Western countries currently involved in a decisive final round of talks with Iran to negotiate a deal on its nuclear drive, says a Paris report. “Whereas until now the P5+1 had a very homogeneous attitude, in the past days representatives in the negotiations have put forward a certain number of different approaches between part of the 5+1 and our Russian partners,” Fabius told a parliamentary commission.

London: In a first physical evidence that a sudden dip in temperatures wiped out dinosaurs, a team of scientists has revealed that a massive asteroid hit the earth 66 million years ago, causing “nuclear winter” and the ultimate demise of giant animals.

The “Chicxulub” impact is likely to have lowered global sea surface temperatures by as much as seven degrees Celsius.

The evidence was hidden in Brazos River region of Texas. Sedimentary rocks were analysed from the same age as the asteroid impact, containing layers of broken shells.

“The global ‘impact winter’ perturbed a relatively stable, warm climate and likely represented a major stress factor for life on earth,” said Johan Vellekoop from Utrecht University in the Netherlands.

The “winter” is thought to have lasted no more than two to three decades but that was long enough to wipe out the dinosaurs, flying and swimming reptiles, and many other forms of life, researchers noted.

As seen in computer simulations, sunlight reaching the earth’s surface might have been reduced to around 20 percent of its normal level after the impact.

The first hours of the impact were marked by earthquakes, tsunamis and global wildfires. Next, dust and sulphur droplets would have collected in the atmosphere and blocked out the sun’s rays.

The ‘dark phase‘ would have caused a global collapse of terrestrial and marine food webs, said the study that appeared in the journal Proceedings Of The National Academy Of Sciences.

US creates the first horn