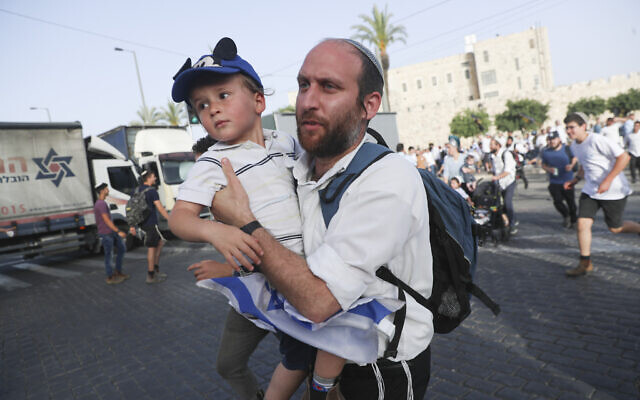 ‘We march as we want’: Jerusalem Day parade to go ahead through Muslim Quarter

Israeli leaders vowed Friday that they would not be intimidated by threats of violence from Palestinian terror groups over Sunday’s contentious Jerusalem Day Flag March, which will go ahead as planned through the Old City’s Muslim Quarter as in the past. I

“We will hold whatever kind of march we want to in our capital,” said Defense Minister Benny Gantz in a message of warning to Hamas. “You will not threaten our sovereignty.”

“Last year Hamas decided to fire rockets, and it still regrets that Operation Guardian of the Walls ever happened,” Gantz said referring to the Israeli response that inflicted widespread damage on the terror groups and the Strip.

Gaza terror groups, and the Iran-backed Hezbollah in Lebanon, have all issued fresh warnings over the march.

Sunday marks Jerusalem Day, the anniversary of the unification of the city during the 1967 Six Day War. Israeli nationalists mark the day with an annual march of flag-waving participants, which usually proceeds via Damascus Gate through the Old City’s densely populated Muslim Quarter and to the Western Wall.

Israelis run to shelters as rocket warning sirens go off during a Jerusalem Day march on May 10, 2021, after Palestinian terrorists in the Gaza Strip fire rockets toward Israel. (AP Photo/Ariel Schalit)

The parade’s route is fraught, with opponents seeing its procession through the Muslim Quarter as a provocation, and supporters seeing it as an expression of Israel’s sovereignty over Jerusalem.

Prime Minister Naftali Bennett also said Friday that the route would go through the Muslim Quarter as planned. Apparently seeking to defuse calls by terror groups to Palestinians to defend Al-Aqsa Mosque atop the Temple Mount from the nationalist marchers, Bennett noted that the parade does not go to the Temple Mount.

Speaking after a security consultation with top law enforcement officials, including Public Security Minister Omer Barlev and Police Commissioner Kobi Shabtai, Bennett noted that the march will end at the Western Wall as usual.

The Temple Mount, the holiest place in Judaism, houses the Dome of the Rock and the adjacent Al-Aqsa Mosque, the third holiest shrine in Islam. It has been a frequent flashpoint for conflict and clashes.

In anticipation of Sunday, the Border Police called up three units — a total of 200 reservists — who underwent 24 hours of refresher training, including crowd dispersal methods, and mental preparedness for the event, a spokesperson said. 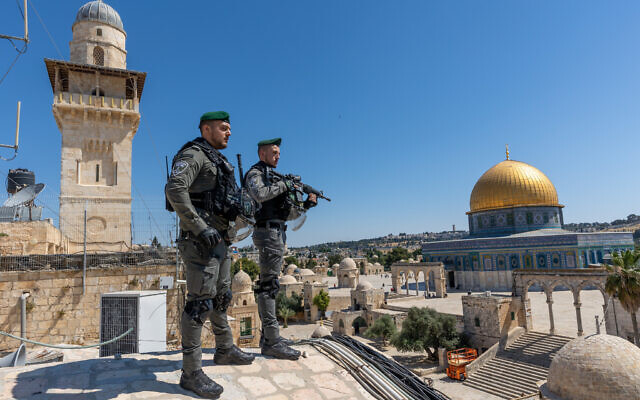 Police have already announced that they will be on their highest state of alert and mobilize over 3,000 officers in Jerusalem.

Also, Friday, police said that in a bid to prevent clashes, only senior police officers will have the authority to order the taking down of Palestinian flags during the march if they pose a risk or constitute provocation.

Officers rushed her funeral procession, almost causing the casket to fall, in part in a bid to take down Palestinian flags, which Israel sees as a challenge to its authority in the capital.

In the lead-up to Sunday, Israel has faced pressure to change the route of the march from the international community, including from the US. Left-wing members of the coalition have also called for a change.

Israel has stressed to Hamas via mediators that the march route is no different from that of previous years, and does not include the Temple Mount.

Nevertheless, the Hamas and Islamic Jihad terror groups have been readying rocket launchers and put their armed wings on high alert ahead of Jerusalem Day, Israeli and Palestinian media sources reported Thursday. At the same time, the Al-Quds Palestinian daily said the Gaza groups are not interested in being drawn into a conflict at this time, as it would disrupt work to rehabilitate Gaza from last year’s fighting with Israel.