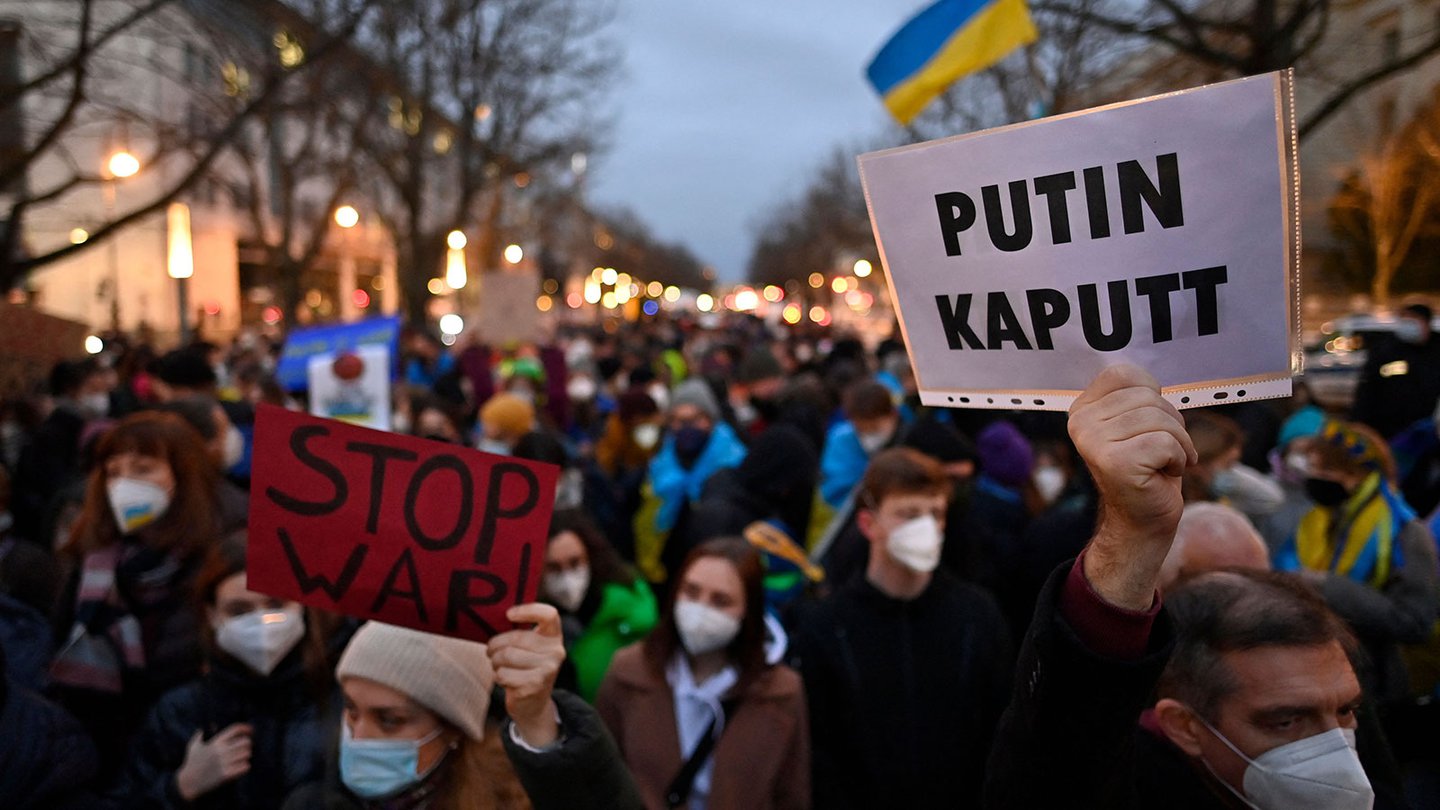 How Is Russia’s Invasion of Ukraine Likely to Alter the Post-World War II International Order?

The dramatic global events unleashed by Russia’s invasion of Ukraine and other fast moving global trends require deep expertise to be understood and explained. A group of experts offer their perspectives on some critical global challenges

Pro-Ukraine demonstrators in front of the Russian embassy in Berlin on February 22, 2022, two days before President Vladimir Putin ordered his forces to invade Ukraine. (Credit: John MacDougall/AFP via Getty Images)

As a foundation with a historical commitment to improving the ability of the United States to understand international issues and foreign countries, Carnegie Corporation of New York has solicited expert views on three critical questions provoked by Russia’s invasion of Ukraine on February 24, 2022: How is Russia’s invasion of Ukraine likely to alter the post-World War II international order? How can we avoid further escalation of the international conflict? And what knowledge is needed for the U.S. to navigate evolving foreign policy challenges?

Experts on Russia, nuclear security, and international affairs more broadly, offer their views on each of these questions in a series of three articles. This article addresses the first question through brief perspectives, with each answer limited to 100 words or less.

In the spirit of the Corporation’s mission to promote the advancement and diffusion of knowledge and understanding, the responses shed light on developments that will impact national policies and international relations for the foreseeable future. – Deana Arsenian, Vice President, International Program, and Program Director, Russia and Eurasia, Carnegie Corporation of New York

How is Russia’s invasion of Ukraine likely to alter the post-World War II international order?

Russia’s repeated aggression against Ukraine is increasing demand for U.S. “nuclear umbrellas” in Asia and Europe. South Korea and Japan are debating redeployment of U.S. nuclear weapons; Finland and Sweden have applied to join NATO. Pressures to expand the U.S. nuclear arsenal are growing, potentially reversing a three-decades-long trend of arms reductions and creating new dangers of nuclear use. With concerns about U.S. commitments to its alliances at an all-time high owing to the Trump administration’s threats to withdraw, some U.S. allies may choose to develop their own nuclear weapons, with untold consequences for the international order.

President Biden vowed that “in the contest between democracy and autocracy, between sovereignty and subjugation … freedom will prevail.” Yet, governments representing half of humanity remain on the sidelines. Many are authoritarians who share Russian concerns that the West increases its security and advances its values at others’ expense. For a unified international response, Biden should acknowledge these concerns and repudiate aggression as an acceptable response. He should explain how unified action against aggression by a coalition of countries with different forms of government will lead to a more inclusive and equitable rules-based international order.

With concerns about U.S. commitments to its alliances at an all-time high owing to the Trump administration’s threats to withdraw, some U.S. allies may choose to develop their own nuclear weapons, with untold consequences for the international order.

Professor of Political Science and International Affairs at George Washington University; Co-director of the Program on New Approaches to Research and Security in Eurasia (PONARS Eurasia)

It depends greatly on how the war ends. If Russia winds up with recognized territorial gains (de facto or de jure), a new “nuclear impunity” precedent will have been set that will incentivize a) more states to become nuclear and b) authoritarian nuclear states to use conventional force to settle their territorial disputes at the expense of states not covered by a nuclear umbrella. Among other things, this will harden a divide between NATO and non-NATO in Europe and likely lead to an expansion of Chinese influence in Asia. To the extent Russia fails, the opposite signal will be sent.

Also in This Series

Explore more questions on the Russian invasion of Ukraine, as answered by experts and our grantees

It has dramatically undermined the global nuclear order that has evolved since World War II. That order has been responsible for preventing the use of nuclear weapons, limiting the number of countries with nuclear weapons, and benefiting from clean nuclear electricity and nuclear medicine. The order was led by the United States, but it would not have been possible without strong support from Russia. Russia’s shelling of a nuclear power station and its irresponsible incursion into Chernobyl’s contaminated areas along with threatening to use nuclear weapons has turned Russia from a responsible state to a nuclear pariah.

The Russian invasion of Ukraine is set to improve the ability of the United States and its allies to deter aggression with indirect means while paradoxically increasing investment in orthodox tools. The invasion has been ruinous for Russia — its economy devastated by punishment from governments and corporations, its military depleted in manpower, munitions, and support from the Russian public. Economic punishment and asymmetric warfare with advanced weapons should give any potential aggressor pause. At the same time, the United States will likely rededicate itself to nuclear deterrence and forward the presence of conventional forces that are already stretched too thin.

[Biden] should explain how unified action against aggression by a coalition of countries with different forms of government will lead to a more inclusive and equitable rules-based international order.

Three months of vicious fighting have confirmed that Putin wants to take Russia out of the post-World War II (and post-Cold War) international order. Putin clearly believes his view of Russian interests overrides the principle of sovereignty – the backbone of international relations. Moreover, the list of international institutions that Russia intends to leave – or has already left – continues to grow, including the World Trade Organization, the World Health Organization, and the Council of Europe. NATO may have emerged strengthened, but the rest of the international legal order that arose from World War II, Nuremburg, and Helsinki remains in decline and is unlikely to be revived anytime soon.

Public alarm at the threats of nuclear use by Putin could propel the fragile nuclear world order in either of two directions. It could induce nations to develop nuclear weapons for protection from invasions, stimulate weapon states to enhance nuclear capability, and accelerate the new nuclear arms race currently underway. Or it could be a wake-up call to move toward a world without nuclear threat. The Ukraine crisis opens an opportunity to fight for the latter. But, I fear and expect, at least in the U.S., that voices for the first direction will prevail, further eroding international nuclear arms control.

The war in Ukraine is a deep, self-inflicted wound to Russia and its global standing. Moscow’s influence in the future world order will depend much more now on its willingness to serve as China’s junior partner.

Professor of Politics and Public Policy, University of Virginia

Russia has given us a vivid reminder that nuclear weapons are not a magic wand. As the war began, Vladimir Putin made several nuclear threats – both explicit and implied. But the fear of nuclear escalation has not intimidated Ukraine into submission. Nor have these threats dissuaded the West from imposing crippling sanctions on Russia and providing military aid to Ukraine. If anything, Putin’s nuclear bellicosity has only fueled the international backlash against Russia. The war has thrown a spotlight on the political limits of nuclear weapons, and dictators with nuclear ambitions should take note.