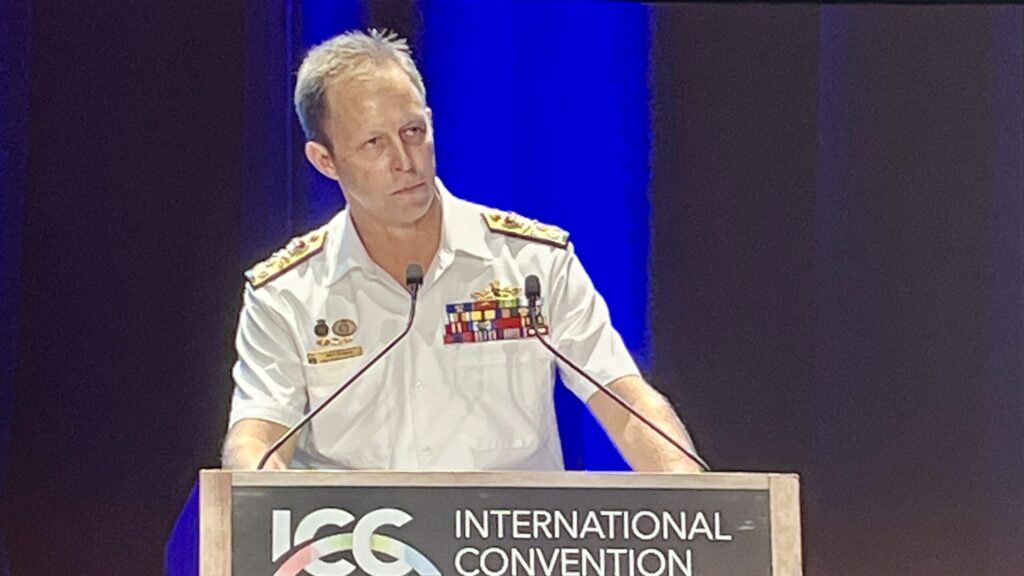 “Steps are now underway to Australia to ensure Australia has a workforce with the necessary skills, training and qualifications to build, operate, sustain, and [decommission] a conventionally armed, nuclear-powered submarine capability,” Vice Adm. Mead noted.

SYDNEY: While Navy leaders from more than 40 countries arrived at Sydney’s International Conference Center this week for Australia’s biggest naval conference, two of the largest Pacific nations — China and Russia — were obvious non-invites.

The invitations for those two nations from the Royal Australian Navy, which runs the Indo-Pacific Sea Power Conference, were “torn up,” as ABC put it. PLA representatives had attended in past years, but China’s trade strikes, interference in Australia’s elections and general bolshiness drove the RAN to drop them from the first Indo-Pacific Maritime show since COVID struck.

The day before the show began, naval representatives from 13 Pacific island states met with Navy Chief Vice Admiral Mike Noonan, which he mentioned in his show opening speech. That group included the Solomon Islands, the scene of recent discord over its prime minister’s decision to sign a secret security pact with China.

Noonan’s remarks made clear why the Chinese had not been invited this time.

He said the RAN will operate “as a force for good against tyranny, oppression and authoritarianism. The Royal Australian Navy will serve to represent our nation and the hopes we all share for a free liberal, stable and peaceful Indo-Pacific in our ambitions for peace, and for our mutual prosperity.”

As for Russia, Noonan didn’t name it, but he clearly addressed Putin’s perfidy in his address: “We will all observe around the world today the incredible suffering and violence — violations of international law — that none of us expected to see in 2022.”

The only navy program to have its own session, the AUKUS nuclear attack submarine, highlighted just how thin Australia’s nuclear expertise is and how much needs doing to ensure the country can manage the advanced technologies that a nuclear sub entails. 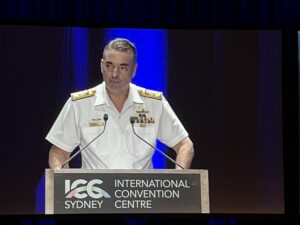 Noonan said in a Q&A with reporters that the task force is paying close attention to the lessons of Adm. Hyman Rickover, father of the nuclear navy in the United States. Rickover created a culture of openness and questioning, something at odds with much of what the Navy taught and trained to. Rickover also prized nuclear safety above all. His approach, and his commitment to engineering excellence, became the heart of American naval nuclear culture.

Vice Adm. Jonathan Mead, who heads the Australian task force overseeing the first 18 months of the AUKUS sub project, said he’s just returned from a tour of nuclear sub shipyards in America. And he spent a fair bit of his speech talking about safety.

“Australia’s decisions, both now and the task force and into the future, must reflect unwavering commitment to safe and secure stewardship of nuclear propulsion technology. This commitment, this nuclear mindset, must be part of our DNA,” Mead said. “Australia will have the highest safety and security standards as we build a nuclear powered submarine enterprise. This is a whole-nation effort first, which will generate opportunities for decades to come.”

Much of the rest of his remarks dealt with efforts to train military and civilians in things nuclear. Australia has a tiny number of nuclear trained personnel.

“Steps are now underway to Australia to ensure Australia has a workforce with the necessary skills, training and qualifications to build, operate, sustain, and [decommission] a conventionally armed, nuclear-powered submarine capability,” Mead noted.

“We are working to strengthen the nuclear workforce in Australia. Scholarships have been offered to encourage more Australians to study nuclear science and engineering and as I speak, defense personnel, both military and non-uniform, are studying for a masters of nuclear science at Australia’s National University in Canberra, and a masters of nuclear engineering here in Sydney in New South Wales at the University of UNSW.”