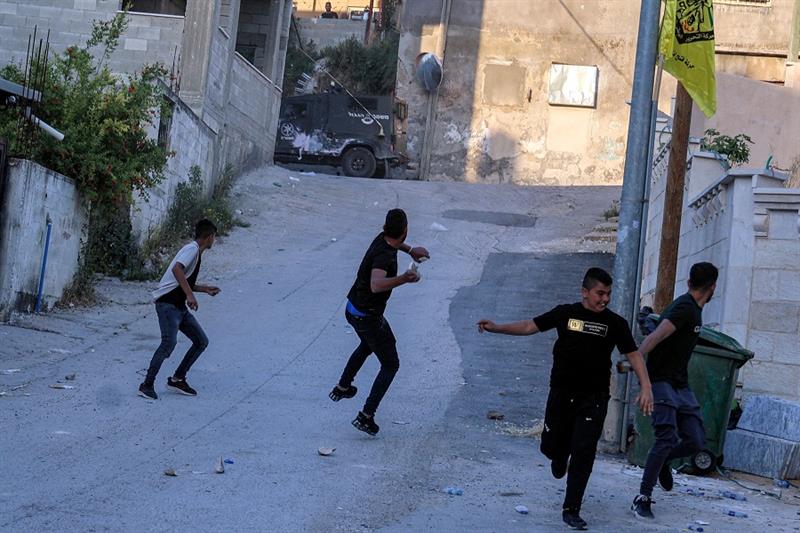 Two Palestinians were shot dead and another was wounded in separate incidents in the Israeli-occupied West Bank and annexed east Jerusalem on Sunday, officials said, the latest in a spate of violence.

Palestinian youths throw stones at Israeli forces vehicles during their a raid on a house in the town of Rummanah, near the flashpoint town of Jenin in the occupied West Bank on May 8, 2022, reportedly the home of Palestinian Subhi Imad Abu Shukair, suspected of carrying out a fatal axe attack in the central city of Elad two days earlier. – (Photo by AFP)

The unrest came hours after the arrest of two Palestinians suspected of axing three Israelis to death, and as a series of anti-Israeli attacks and bloody violence has left dozens dead since late March, among them Palestinian and Arab-Israeli perpetrators.

In the southern West Bank, a Palestinian armed with a knife infiltrated the Tekoa settlement before being shot by a resident, the army said.

“Soldiers were dispatched to the scene and are searching the area for additional suspects,” a statement from the military said.

A short time earlier, a 19-year-old Palestinian without an entry permit for Israel stabbed a police officer outside the Old City in east Jerusalem before being shot and “neutralised” by forces at the scene, a police statement said.

The officer was taken to hospital in moderate condition, police said, with medics saying the stabber was not dead.

Earlier Sunday, Israeli soldiers shot dead a Palestinian who tried to enter Israel through the Israel’s in the north of the occupied West Bank.

Soldiers “identified a (person) trying to cross the security barrier” near Tulkarem, an army statement said. “The force shot at him in accordance with procedures. The suspect was taken for medical care.”

Security forces had earlier arrested two Palestinians suspected of carrying out an axe attack in central Israel on Thursday that left three dead.

The security services — who previously identified the suspects as Assad Yussef al-Rifai, 19, and Subhi Imad Abu Shukair, 20 — said the pair were spotted hiding in a bush near a quarry, just outside the central town of Elad, where the attack took place.

The perpetrators had entered Israel through the porous barrier with the West Bank, an Israeli military official said earlier, calling their infiltration a “failure” of the army.

The manhunt included the police, domestic security agency and the army, along with helicopters and drones, the security forces said.

The Israeli military official said bloody banknotes, presumably dropped by the suspects in flight, helped lead the forces to where the pair were hiding.

Forces scanning the area noticed a bush “that looked a bit different”, said the official, who spoke to reporters on condition of anonymity.

Israel has identified the three killed Thursday as Yonatan Habakuk, 44, and Boaz Gol, 49, both from Elad, as well as Oren Ben Yiftach, 35.

The bloodshed unfolded as Israel marked the 74th anniversary of its founding, which has previously been a tense day in the Israeli-Palestinian conflict.

The Elad killings followed a tense period in which the Muslim fasting month of Ramadan, the Jewish festival of Passover and the Christian holiday of Easter overlapped.

Tensions have boiled over into violent clashes between Israelis and Palestinians at the Al-Aqsa mosque compound, a highly contested site in Jerusalem’s Israeli-annexed Old City.

Palestinian president Mahmud Abbas had condemned the Elad attacks, warning that the murder of Israeli civilians risked fuelling a broader cycle of violence.

But the Gaza Strip’s Islamist rulers Hamas praised the attack — as did the Gaza-based Islamic jihad armed group — calling it a consequence of unrest at Al-Aqsa.

The Islamic Jihad called the attackers “heroes” and said their arrest would not “discourage” people from continuing their violent resistance.

Hamas said the attack “demonstrates our people’s anger at the occupation’s attacks on holy sites”.

Last week Hamas threatened Israel with rockets, knives and axes if its security forces carry out further raids on the Al-Aqsa mosque compound.

A string of anti-Israeli attacks since March 22 have killed 18 people, including an Arab-Israeli police officer and two Ukrainians.

Two of the deadly attacks were carried out in the Tel Aviv area by Palestinians.

A total of 29 Palestinians and three Israeli Arabs have died during the same period, among them perpetrators of attacks and those killed by Israeli security forces in West Bank operations.