The Hamas terror group warned Israel against allowing Jewish visitors to enter the flashpoint Temple Mount site on Thursday after some right-wing groups planned to visit the sacred hilltop on Independence Day.

“The Zionist occupation authorities’ allowing flocks of settlers to storm the courtyards of the blessed Al-Aqsa Mosque on Thursday is playing with fire and drags the region into an escalation for which the occupation will bear full responsibility,” Hamas said in a statement on Wednesday afternoon.

Nationalist Israeli groups are planning to ascend to the Temple Mount, Judaism’s holiest site, for the first time since Passover. The hilltop also contains the Al-Aqsa Mosque, the third-holiest site in Islam, making it a deeply contested flashpoint between Arabs and Jews.

The Jewish groups say they plan to wave the Israeli flag and sing Israel’s national anthem at the holy site in celebration of Independence Day, which falls on Thursday.

“This Independence Day begins in blue and white on the Temple Mount!” declared BeYadeynu, a right-wing group that promotes Jewish worship at the site.

Under the fragile status quo on the Temple Mount, only Muslims are permitted to worship. Non-Muslim visitors are allowed to visit at specific dates and times, and Israeli police have detained Jews openly praying at the scene in the past. 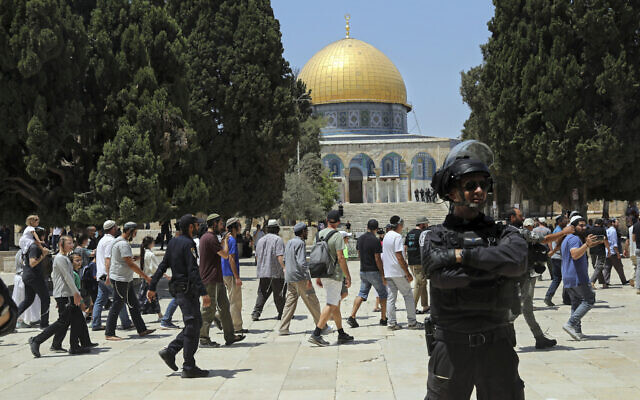 An Israeli police officer stands guard as a Jewish group walks near the Dome of the Rock Mosque atop the Temple Mount on Tisha B’Av (the ninth of Av), a day of fasting commemorating the destruction of the ancient Temples, in the Old City of Jerusalem, Sunday, July 18, 2021. (AP Photo/Mahmoud Illean)

The Israeli government has repeatedly said it is committed to the status quo. But footage of police turning a blind eye to Jewish worshipers has repeatedly cropped up in recent years, angering Muslims.

Palestinians and Israeli forces have clashed repeatedly at the Temple Mount over the past few weeks. The violence echoed scenes from last year, when rioting helped spark a war between Israel and Gaza-based terror groups led by Hamas.

Ever since the May war, Hamas has threatened to fire rockets at Israel if it violated the organization’s “red lines” in Jerusalem. The terror group has hailed its “deterrence” against Israel in the contested capital as a key achievement of the war, which wrought widespread destruction in Gaza.

Hamas’s Gaza leader, Yahya Sinwar, said on Saturday the terror group “will not hesitate to take any steps” if Israel “violates” the Al-Aqsa Mosque.

“Our people must prepare for a great battle if the occupation does not cease its aggression against the Al-Aqsa Mosque,” Sinwar said.

According to the Hamas-linked Safa news site, deputy Hamas chief Moussa Abu Marzouk led a delegation of senior members to the Russian capital. They and the Russian officials will discuss “the situation in Jerusalem and bilateral relations between Hamas and Russia,” Safa reported. 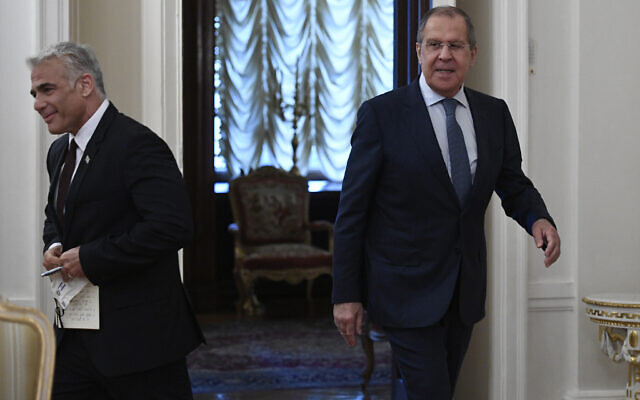 “So what if Zelensky is Jewish? The fact does not negate the Nazi elements in Ukraine. I believe that Hitler also had Jewish blood,” Lavrov said, invoking a conspiracy theory widely debunked by historians of Nazi Germany.

After heavy criticism from Israeli officials, the Russian Foreign Ministry doubled down, implicitly comparing Israel with the Judenrat councils, which cooperated with the Nazi regime during the Holocaust.

Hamas has seen its relationship with Russia improve in recent years. Last month, Hamas leader Ismail Haniyeh held a rare phone call with Lavrov to discuss “the political efforts to stop the Israeli violations of the Al-Aqsa Mosque,” according to Haniyeh’s office.