Flames and smoke rise during Israeli airstrikes in the central Gaza strip, on April 21, 2022. (Bashar Taleb/AFP)

The IDF carried out a pair of air raids in Gaza after midnight on Thursday in response to rocket fire and anti-aircraft missiles launched from the Hamas-run enclave during what appeared to be the tensest night in the Strip since last May’s 11-day war.

During the exchange, the IDF said its Iron Dome missile defense system mistook gunshots for a salvo of rockets in what initially appeared to be a sign of a significant escalation. But by night’s end, the army confirmed that only one rocket had been fired into Israel during the whole exchange.

That launch took place at around 10:30 p.m. on Wednesday night, with shrapnel from the rocket striking a parked car and a wall near a home in the city of Sderot. Hundreds of ball bearings that were loaded into the rocket were found at the scene.

Less than three hours later, the IDF said it responded with airstrikes in central Gaza targeting a military post as well as a tunnel complex “containing raw chemicals used for the manufacturing of rocket engines.” The IDF claimed its strike marked a significant blow to the rocket production process in Gaza.

For the second time this week, the army said that Hamas targeted its jets with anti-aircraft missiles during the raid.

In response, the IDF said it launched a subsequent raid targeting a compound used by Hamas’s air defense force.

During this second raid at around 2:00 a.m., gunshots were fired that triggered Red Alert sirens as well as the Iron Dome, whose Tamir interceptor missiles lit up the sky in what appeared to be the downing of several rockets.

After initially announcing the downing of four rockets, the IDF issued a statement at 5:45 a.m. clarifying that what had triggered the Iron Dome had been gunshots, not rockets. The army added that it was looking into what caused the malfunction.

Fifteen minutes earlier, the army said Gaza terrorists sought to launch another rocket into Israel but that the projectile landed inside the Strip. It managed to set off an alert in an open area near a Gaza border town, but nowhere else.

No Israelis were directly injured by the rocket fire earlier in the night, but three people were lightly wounded in falls that took place while running to bomb shelters. All of them were evacuated to Ashkelon’s Barzilai Medical Center for further treatment before being released shortly thereafter, according to the hospital. 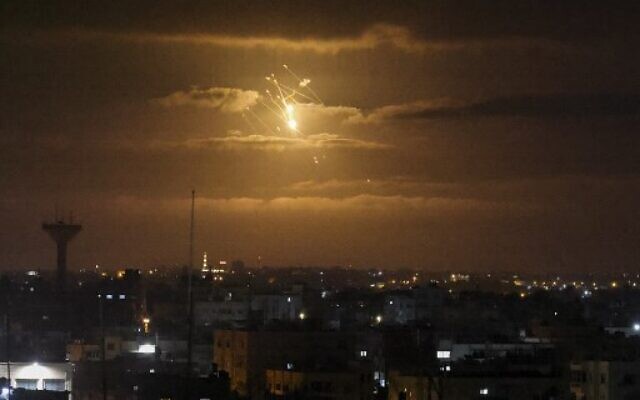 A missile from Israel’s Iron Dome air defense system lights the sky over the Gaza Strip on April 21, 2022. (Said Khatib/AFP)

No Gaza group immediately took responsibility for either of the night’s launches, as had been the case after the week’s first rocket launch on Monday evening. However, several media reports citing Israeli security officials pegged Hamas-rival Palestinian Islamic Jihad as responsible for the Monday rocket fire.

Regardless, the IDF responded to the week’s first rocket launch with an air raid targeting a number of Hamas military sites in Gaza, including one used by Hamas to manufacture weapons.

The army said in its early Thursday statement that it holds Hamas responsible for what takes place in the Gaza Strip, sticking to its long-held justification for targeting posts belonging to the enclave-ruling group in response to rocket fire, regardless of whether its fighters were behind the launches or not.

Hamas spokesperson Hazem Qasim said early Thursday that “the bombing of Gaza will increase the persistence of our people and its resistance to continue the struggle and escalate support and aid for our people in Jerusalem.”

This week’s rocket attacks ended an almost four-month period of quiet on the Gaza border. Wednesday’s rocket fire came at the tail-end of a tension-filled day in Jerusalem, where Israeli nationalists were prevented by police from marching through the Old City’s Damascus Gate, a popular gathering point for Palestinians in East Jerusalem. Hamas had threatened to attack if the march went ahead.

Recent days have seen violent clashes between Palestinian rioters and police on the Temple Mount in Jerusalem, leading to the injury of dozens of Palestinians and several police officers.