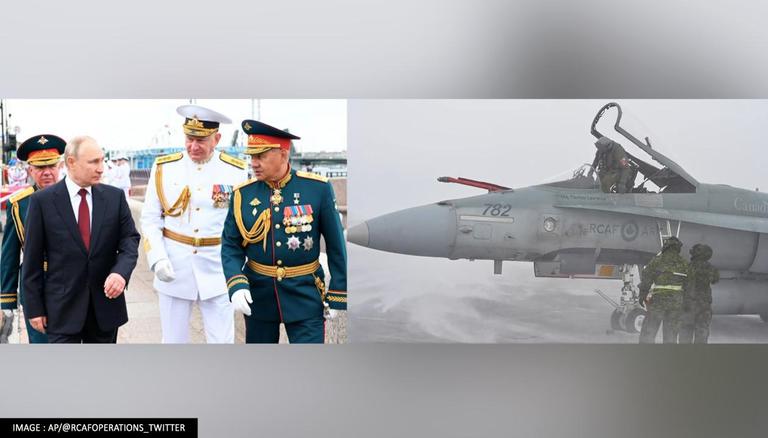 Drill implies emergency evacuation of Kremlin’s officials and Putin by military commanders in an event of nuclear warfare on doomsday planes.

Russian President Vladimir Putin sent shockwaves among Kremlin officials on Sunday as he ordered military commanders to prepare for a “doomsday” nuclear evacuation drill as Moscow registered 17,000 military casualties in course of the 25th day of the raging war with Ukraine. The drill implies emergency evacuation of the Kremlin’s officials and the Russian Federation leader by military commanders in an event of nuclear warfare on so-called modified “doomsday” nuclear impact-resistant planes. Vladimir Putin has been “venting his rage on allies close to him,” an insider Kremlin source claimed on a telegram channel linked to the Russian Federation’s presidency and an ex-Kremlin intelligence official maintaining close ties to Russia’s Presidential circle.

Embattled Putin has scrambled his deterrent forces into ‘high alert’ just 24 hours after Moscow launched the nuclear-capable hypersonic aero-ballistic Kh-47M2 Kinzhal missile (dagger) for the first time capable of evading the air-defense systems. It targeted the underground Ukrainian military warehouse, storing missiles and aviation munitions in the Ivano-Frankivsk region that runs along a 50km (30 miles) long border with NATO ally state—Romania. Russian combat forces have also resorted to deploying the prohibited thermobaric vacuum bombs and non-precision weaponry banned under Article 2 of the 2008 Convention on Cluster Munitions ratified by over 110 state parties, and 13 countries. Both Russia and Ukraine are not signatories.

Russia has also been introducing the kamikaze drones into the war and had threatened to deploy nuclear submarines that Kremlin warned will discreetly sail outside US territorial waters should NATO and Washington deploy intermediate-range nuclear weapons in eastern flank of Europe, “Russia’s doorstep.” Moscow hosts world’s largest nuclear stockpile. Of the total 12,000 total nuclear warheads suspected to be owned by just nine countries, Russia and United States own 2,700 of them in violation to the Non-Proliferation of Nuclear Weapons (NPT) and the International Humanitarian Law (IHC).

As Putin ordered “doomsday” nuclear manoeuvre, “everyone who received this warning was taken aback by the President’s commands, and expressed grave concern,” the Russian Presidency-linked telegram channel claimed. On a collision course with the United States and Alliance, the ex-Soviet Union has maintained the top-secret aerial command center nicknamed the “Doomsday” and has modernized and outfitted two Ilyushin 96-400M’s under “а special military project”codenamed “Zveno-3C” (Component-3C).

The former Soviet state has justified its vast atomic arsenal as securing its own strategic parameters towards the “unfriendly state” like the United States and provocative alliance ‘NATO.’ In the likely event of Moscow resorting to a nuclear strike response in waging conflict, its military troops can deploy long-range intercontinental ballistic missile RS-28 Sarmat NATO designation SS-18 Satan or an RS-28 capable of striking longer distances via the North Pole on the shortest route to Washington with a 100-ton nuclear warhead. Russia’s defense ministry announced its nuclear arms to be placed on a “special regime of combat duty” weeks after it launched an offensive in Ukraine on February 24.

The ultramodern ‘Doomsday’ aircraft, also known as “flying Kremlins” — two airborne command and control planes Ilyushin 96-400Ms — will be used in the event of a nuclear war. They will also ferry Russia’s leadership to safety in the event of an attack as they are a windowless save for the cockpit and are resistant to radioactivity. “Doomsday” weapons, of which modified fighter aircraft are a part, is a term that refers to nuclear weapon or weaponry system that deploys prohibited and dangerous hydrogen bombs that will trigger hazardous fallout on humanity, apparently ensuing a “doomsday.”

Moscow’s State-run news agency RIA-Novosti had reported that construction on the first of the two modified Ilyushin Il-96 aircrafts that replaced the existing Doomsday Ilyushin Il-80s had been underway in the central Russian city of Voronezh. The doomsday planes comprising airborne nuclear missile launchers with 3,700 miles range have been in service since the late 1980s and reportedly underwent maintenance at an airfield in Taganrog in southern Russia.

“The aircraft’s radio complex will make it possible to deliver orders to the troops, including strategic aviation, mobile, and silo launchers, submarines, and carriers of strategic nuclear weapons within a radius of 6,000 kilometers (3,700 miles),” the Russian state-affiliated agency had reported.

Earlier in December 2020 reports emerged that parts of the radio equipment from one the Il-80 Doomsday planes were stolen during maintenance. Russia’s Retired Air Force Maj. Gen. Vladimir Popov confirmed the reports with Russain daily Moskovsky Komsomolets. Dmitry Peskov, Putin’s press secretary, admitted that the episode occurred and labelled it as an “emergency situation” in a conference call. “Of course, there will be an investigation, and measures will be taken so that this does not happen again,” he said.

Shield against nuclear and thermal effects

Putin’s doomsday aircrafts turned more frequent on Kremlin’s state-affiliated news agencies after Pentagon press secretary John Kirby tweeted a video of the mid-air refueling of a US Air Force’s doomsday E-4B command and control aircraft, a variant of Boeing 747-200. The US doomsday planes are equipped with electromagnetic pulses that shield against nuclear and thermal effects. ”An E-4B refuel mid-flight simply never gets old,” Kirby wrote on Twitter.

United States’ modified 747-200 jetliner that is a US presidential transport is also capable of acting as a doomsday plane. United States’ Doomsday planes were spotted in the early week of March on a training sortie after Russian President Putin ordered his nuclear forces on ‘special alert’. During the Cold War era’s Cuban Missile Crisis in the early 1960s, these Doomsday planes which can be refueled and fly almost 24/7 were seen on sorties prompting fears of nuclear exchanges with the Soviet Union.

Russia, in perspective, is the largest nuclear power and its arsenal is controlled by ‘Perimeter’ or automatic nuclear weapons control system that went LIVE in 1985. Should the authoritarian leader Putin order a drill of this nature, his military commanders could activate the Perimeter within a few minutes, deploying a nuclear-capable nation’s entire atomic arsenal in response to the conventional conflict implementing the Cold War doctrine. The process, widely coded as ‘Dead Hand,’ would involve command missile equipped with radio warhead to transmit signals to ICBMs designed to launch silo-based nuclear weapons for “limited use” in a threatening act of “escalation dominance.”

Back in 2017, Russia deployed the land-attack cruise missile system of “nuclear profile” designated as SSC-X-8 or Screwdriver in violation of 1987 Intermediate-Range Nuclear Forces (INF) treaty. It test-fired 9M728 and 9M729 long-range cruise rockets with nuclear warheads.