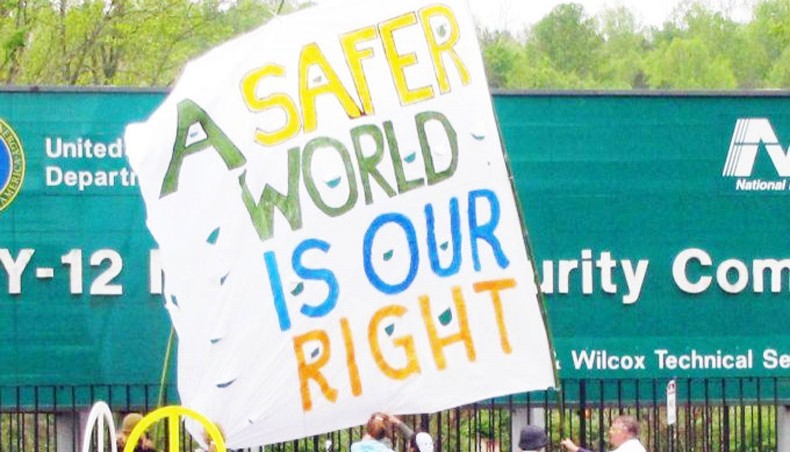 AS THE west worked itself into a lather in the last month over Russia moving its troops within its own borders, one Republican senator, Roger Wicker of Mississippi bellowed on December 8 that the United States should attack Russia with nuclear weapons. This horrifying threat to end human life on the planet comes from someone of no little puissance, as others quickly noted. Wicker sits on the armed services committee. So he communes regularly with Pentagon bigwigs, many of whom are said to have little regard for presidential professions of concern for posterity and promises never to explode the nuclear devices that would eliminate that posterity once and for all. One must assume when someone of Wicker’s exalted position speaks, he speaks not only for himself.

Fortunately, the five most impressively nuclear-armed nations moved quickly to throw cold water on those who advocate an atomic apocalypse, and that included drenching senator Wicker. China, Russia, France, the United Kingdom and the United States issued a joint statement on January 3 that avoiding nuclear war is a paramount goal. ‘We affirm that a nuclear war cannot be won and must never be fought,’ agreed the five countries. ‘We each intend to maintain and further strengthen our national measures to prevent unauthorised or unintended use of nuclear weapons.’ The statement also calls for progress on disarmament. It could not be more apposite.

That’s because the western Russophobic propaganda machine — the biggest and most deafening of its kind in world history, cranked up to full volume at all corporate news outlets, drowning the world in cuckoo-bird ravings about treacherous Slavs — now would have us believe that the Russians are planning false flag attacks in Ukraine. False flags are pretty much a US military/media specialty, in fact, Washington owns the patent on them, but most US Americans, blissfully ignorant of this fact, are thus easy marks for such hysteria. So now, this rubbish, regurgitated by credulous newspaper scribes and repeated by government officials, screams at us daily from the headlines. There is practically nothing, zilch, to counter it. The most preposterous prevarications abound, for example, Ukraine’s president, in November, breathlessly announcing that Moscow intended to overthrow him ‘next week’. Among these fabrications lurk tales about Washington’s and NATO’s supposedly benign and even altruistic motives.

Better the world live without NATO than die for its expansion. Because that is what NATO asks us to do. When the US sends E-8 electronic warfare aircraft over Russia’s borders, as it did in December, they’re not there just to say hello. When NATO member Great Britain projects its HMS Defender two miles from the Crimean coast, causing warning shots from Russian coast guard patrol ships, as happened last June 23, this is no innocent, defensive manoeuvre. And when NATO’s supreme commander muses publicly about reinforcing NATO’s eastern flank on Romania and Bulgaria, only an idiot would conclude he’s not preparing for war.

Likewise, only a nitwit would swallow secretary of state Antony Blinken’s bigoted remark January 7 that ‘once the Russians are in your house, it’s sometimes very difficult to get them to leave.’ This from a man whose nation’s military has lodged itself in Germany and Japan for 77 years and counting, occupied Afghanistan for 20 years and is still in Iraq after 19. Blinken has some nerve. But then, he can utter such mendacities in full confidence that he will never, never be corrected in the American press.

It’s no wonder Russia demands written legal guarantees against NATO expansion and western nukes. It’s also no surprise that the US, caught in a lie, now claims that back in the early 1990s it never promised not to expand ‘one inch’ east of Germany, as several officials in president George HW Bush’s administration told Gorbachev and others, in exchange for German reunification.

Meanwhile Biden threatens Russia with ferocious sanctions for moving troops onto its border with Ukraine. Now sanctions are the modern equivalent of the medieval siege, and the US applies them promiscuously. There is no evidence that they succeed at anything other than causing ordinary people to miss meals and diabetics to skip insulin injections. Oh, and sanctions also instil hatred for the US which thus torments the population. Sanctions lead the targeted rulers to consolidate their power. They are counter-productive. Far worse, as happens right now in the 20 countries sanctioned by the US, they kill loads of innocent people, especially vulnerable ones, like children in Afghanistan, for instance. But sanctions make whoever’s leading the latest Washington circus feel like big shots, so their toxic application will probably continue.

The only light on this dismal horizon was the summit between Russia, the United States and NATO that ran from January 10 to January 13. That light flickered out quickly, when it became clear that US officials are incapable of comprehending speech outside the parameters of their exceptionalist ideology. All they offered was hooey about NATO never closing doors. This nonsense is ostentatiously contradicted by the fact that neither Switzerland nor Austria belongs to NATO and are, in fact, constitutionally neutral. Moscow wants some such carve-out for former Soviet territories on its borders. But the Biden team just didn’t get it. When the Russians said including Ukraine in NATO would cause a ‘military technical’ response, that should have elicited a serious counter-offer. It did not.

How do we know the summit teeters on the rim of failure? Because the January 19 Svobodnaya Pressa announced that Moscow has begun deploying the high-precision long-range operational and tactical missile system 9K720 Iskander-M in Crimea. The flight range of these missiles is up to 3,500 kilometres. They can hit any European capital and ‘even American aircraft carriers in the Mediterranean Sea, Arleigh Burke destroyers, Ticonderoga-class missile cruisers.’ Iskanders can be launched simultaneously in a 200-missile barrage. The article is headlined, ‘Moscow’s Patience Snapped: Crimea Deploys Iskanders.’ Blinken jets to Geneva this weekend. Hopefully this news about Russian weaponry will elicit all his diplomatic skills in his confab with Russian foreign minister Sergei Lavrov. The situation is dire.

It is telling that the January summit came at the Kremlin’s request. Dismaying is the only word for Washington and NATO’s apparent complaisance about the drift towards war between Russia and NATO, to say nothing of those Russian nuclear submarines that just completed a rotation off the eastern seaboard of the US a week and a half ago. NATO’s threat to absorb Finland and Sweden only proves the point that this military-industrial money pit is bottomless and its expansionist horizon is the planet itself.

Ukraine is a tinder box. If Moscow eventually militarily supports the Russian-speaking, ethnic Russian majority in eastern Ukraine, the Donbass, a population at loggerheads with ethnic Ukrainians of the west, Washington will have only itself to blame. Those culturally Russian Ukrainians have long wanted to join Russia. Anytime since 2014, Moscow could have allowed this. It did not, because clearly the Kremlin is not eager to partition Ukraine. Nor is Moscow eager for a showdown between nuclear powers. It called the summit, specifically to prevent that.

Speaking of which, Russia’s ally, China, races ahead, beefing up its nuclear arsenal. Shenanigans like the attempted coup in Kazakhstan and the west’s relentless provocations in Ukraine — dating back to 2014, when Washington’s regime-change operation toppled the legally elected pro-Kremlin president — coupled with threats and insults aimed at China, first from the Trump team and now from the Biden entourage, doubtless convinced Chinese leaders that nuclear modernisation is at the top of their to-do list. The US military/foreign policy goal of encircling China with bases and warships no doubt speeds the Chinese effort to produce more nukes.

Indeed, the US department of defence’s November annual report claimed that China would likely have 1,000 nuclear warheads by 2030. ‘Three times more than at present,’ as Michael Klare wrote on December 3 in CounterPunch, ‘and enough to pose a substantial threat to the United States.’ In five years, that same report predicts, China ‘would be ready to conduct “intelligentized” warfare.’ That means the People’s Liberation Army would achieve ‘superior intelligence, communications and battlefield coordination.’

This would enable China ‘to effectively resist any US military response should it decide to invade the island of Taiwan, which they view as a renegade province.’ Klare’s translation of this news is: ‘As the Pentagon sees things, be prepared for World War III to break out any time after January 1, 2027.’

That, unfortunately, could be a conservative estimate. With genocidal senator Wicker barking for nuclear Armageddon right now and an equally bloodthirsty former Obama official, Evelyn Farkas, hollering for war, both apparently eager for a nuclear ‘shock and awe’, it’s past time for Washington to wake up to reality, namely that Russia and China have genuine, legitimate security concerns on their borders. Attempting to muddy the waters with hogwash about spurious ‘spheres of influence,’ as Blinkin did, won’t work. These are issues of border security. They have nothing to do with spheres of influence, and raising the bogus spectre of such spheres is a cynical distraction from Washington’s and NATO’s aggression on the borders of Russia and China.

If the US is concerned with anything other than being seen as the biggest bully on the block, then it will snap the CIA onto a short leash, stop the dirty regime-change operations, shut up about everybody and their grandmother’s sacred right to join NATO, accede to some demands vis-a-vis Ukraine and Taiwan and finally, and very importantly, get serious about arms control treaties. Trump arrogantly and wantonly busted up a couple of those. If Biden wants anything other than a radioactive legacy, he’ll fix that — for starters.