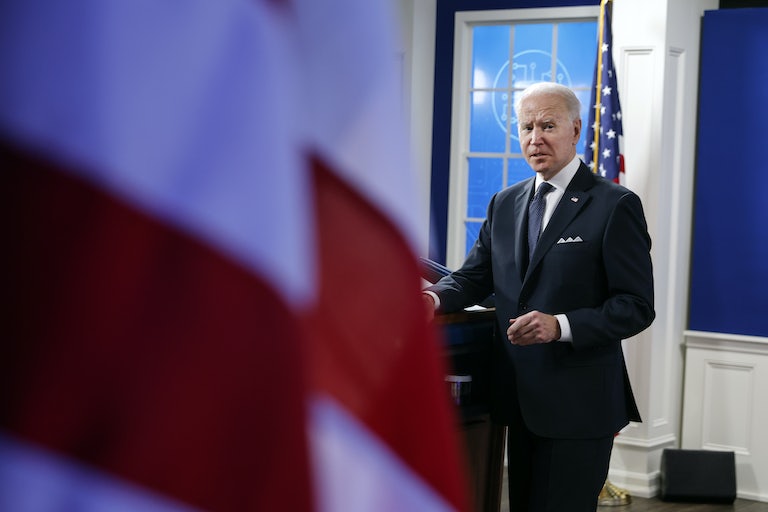 Why Is Biden Compounding Trump’s Mistake on Iran?

The president’s fear of blowback has him slow-walking the Iran deal—while Tehran is getting closer to building a bomb.

Late last year, New York Times columnist Thomas Friedman called the Trump administration’s decision to pull out of the Iran nuclear deal “one of the dumbest, most poorly thought out and counterproductive U.S. national security decisions of the post-Cold War era.”

It’s not often that I find myself in violent agreement with Friedman, but when you’re right, you’re right. Trump’s withdrawal from the Iran nuclear deal (or JCPOA, in the argot) was a disastrous move that has put Iran within disturbingly close range of becoming a nuclear power.

With nuclear talks between the United States and Iran currently at what Secretary of State Antony Blinken calls a “decisive moment,” there is still hope for an agreement between the two sides. But we are fast approaching a point of no return that risks sparking heightened tensions and a new round of conflict in the Middle East.

On the campaign trial in 2020, Biden left little doubt as to his intentions on the JCPOA. “If Iran returns to strict compliance with the nuclear deal,” he wrote in an op-ed for CNN, “the United States would rejoin the agreement as a starting point for follow-on negotiations.

Instead, Biden reopened negotiations with Tehran that, a year later, continue to drag on. All the while, Iran has gotten far closer to building a bomb.

The Iranians had the better side of the argument. After all, the U.S. had unilaterally withdrawn from the JCPOA, while the other nations that were party to the deal (the P5+1: basically, major European powers plus Russia and China) stayed with it.

Since most of the sanctions on Iran are based on executive action, there was nothing stopping Biden from going back into the deal offering the caveat that if there was no progress on Iran coming back into compliance, he’d simply reimpose them.

When I asked Jeffrey Lewis, an expert on nonproliferation at the Middlebury Institute of International Studies at Monterey, why the U.S. didn’t adopt this strategy, he offered me a simple, though pungent answer: “Biden is a wimp.”

He continued: “He would have taken a political hit for taking a chance on the Iranians that might or might not have worked out, but it would have put the ball in Iran’s court” and strengthened the hand of those in Tehran who wanted a deal. In Lewis’s view, Biden was afraid of the backlash, early in his administration, from appearing to make concessions to Tehran.

Multiple sources I spoke to chalk up the president’s reticence to an unwillingness to upset Iran hawks on Capitol Hill and, in particular, Senator Bob Menendez of New Jersey, who is the chairman of the Senate Foreign Relations Committee.

Menendez has long been an opponent of the Iran deal, and there was fear within the Biden team that if the U.S. reentered the agreement without first wringing concessions out of Iran, Menendez would block or slow-roll the administration’s foreign policy nominees.

Others I spoke to argue that part of the problem is one of personnel. Before the rest of Biden’s Iran team had been confirmed by the Senate, those on the National Security Council (who did not need confirmation) who were focused on Middle East policy—like former U.S. Ambassador to Iraq Brett McGurk—were not as supportive of the nuclear agreement.

Whatever Biden’s rationale, his strategy has not worked. Negotiations have dragged on for a year now and are quickly reaching a point of no return. Meanwhile, Iran has pushed ahead in developing its nuclear capabilities. According to a November report by nuclear experts assessing the latest data from International Atomic Energy Agency, Iran has produced enough enriched uranium that it could produce weapon-grade uranium “in as little as three weeks.”

Much of this was predictable. Last spring, analysts I spoke to warned that unless the U.S. and Iran reached an agreement soon, Iran’s presidential election in June would strengthen the hand of hawkish Iranians who have long opposed the nuclear deal. The election was won by hard-liner Ebrahim Raisi, and that’s precisely what has happened.

Talks were put on hold for months after the election, and when both sides returned to the negotiating table, much of the time was spent relitigating issues that the two sides had agreed upon in talks the previous spring.

One of the key Iranian demands has been a commitment from the U.S. that it won’t repeat what Trump did in 2018 when he pulled out of the deal. “They once violated the nuclear deal at no cost by exiting it,” the nation’s Supreme Leader Ayatollah Khamenei said last summer. “Now they explicitly say that they cannot give guarantees that it would not happen again.”

Iran could certainly conclude that it would be better off building a nuclear capability than making a deal that the next Republican president can simply walk away from.

According to Duss, if you look at things from the Iranians’ position, you might conclude that “we’ve been messed with by the Americans over the past several years. Now we have a new president. Can we trust him? Does he have control of his own politics?”

The answer appears to be no. And even if sanctions are lifted now, says Duss, “Will businesses really come back to Iran? Will banks give loans?” With the threat of a Republican president reimposing sanctions, as soon as possibly 2025, it’s hard to see why Iran would want to take that leap of faith.

But according to Lewis, the problem for American credibility runs even deeper. “Don’t blame Iran for making the decision that they want a bomb,” he told me. “After all, what arguments are left for making a deal with the Americans? The U.S. never follows through on their word” when it comes to nuclear agreements.

It’s an underappreciated point. In 1994, the U.S. signed the Framework Agreement with North Korea to end its nuclear program. But the U.S. never lived up to its obligations under the deal, which included the construction of a light-water nuclear reactor and normalizing diplomatic relations, and Pyongyang walked away.

In Iraq, we now know that Saddam Hussein did not restart his weapons of mass destruction program after the Gulf War, and in 2002 he allowed U.N. inspectors back into the country. Yet months later, the U.S. still invaded and ousted Saddam’s regime.

In Libya, Muammar Qaddafi voluntarily gave up his nuclear program, but that didn’t stop the U.S. from actively supporting rebels who toppled his regime and savagely killed him.

And then there is Trump’s withdrawal from the Iran deal.

Considering that history—not to mention the fraught 40-year relationship between the U.S. and the Islamic Republic of Iran—it put a burden on Biden to act proactively, rather than demand even more concessions from Tehran. By choosing not to, Biden has further undermined the JCPOA and helped ensure that Iran is that much closer to a bomb. Even worse, he’s allowing his administration potentially to get further dragged into the region’s viper’s-nest politics.

One discernible feature of Biden’s foreign policy to date is a desire to wash America’s hands of the Middle East. He defiantly pulled U.S. troops out of Afghanistan last summer, is largely ignoring the Arab-Israeli conflict, and is sending clear signals that U.S. foreign policy priorities lie elsewhere.https://3cdc94105a368a8b165b595406fb1f37.safeframe.googlesyndication.com/safeframe/1-0-38/html/container.html

But the failure to reconstitute the Iran deal risks undermining that effort. The closer Iran gets to a bomb, the more the risks of war in the region will rise—and mainly via a potential preemptive attack by Israel.

For Iran, the risks are even greater. International sanctions continue to strangle its economy, and, paradoxically, the closer it gets to producing a bomb, the harder it will be ever to see those sanctions removed. At some point, the U.S. may conclude that further talks aren’t worth much if Iran is basically a turnkey nuclear power.

Both sides need a deal, and there remains guarded optimism that an agreement can finally be reached in the current round of talks. As one close follower of the negotiations said to me, “What’s the alternative?” But the U.S. and Iran should never have reached this point. That they did represents one of Joe Biden’s biggest foreign policy mistakes to date.Michael A. Cohen @speechboy71