Nuclear weapons: Russia, China, Britain, US and France say no one can win a nuclear war

‘No one can win a nuclear war’: Superpowers release rare joint statement

UpdatedChina, Russia, the UK, the United States and France have agreed that a further spread of nuclear arms and a nuclear war should be avoided.According to a joint statement released on Tuesday morning (AEDT), the five countries – the permanent members of the United Nations Security Council – said they considered it their primary responsibility to avoid war between the nuclear states and to reduce strategic risks, while aiming to work to create an atmosphere of security. 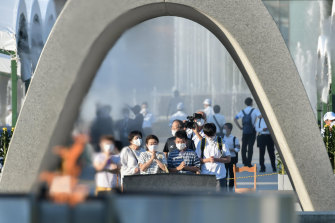 no one can win a nuclear warHiroshima Peace Memorial Park. The five countries making up the UN Security Council – all nuclear powers – say a nuclear war must never be fought.AP“We declare there could be no winners in a nuclear war, it should never be started,” the Russian-language version of the statement read.An English-language version was released by the White House.Related Article“We affirm that a nuclear war cannot be won and must never be fought,” the statement reads. “We also affirm that nuclear weapons – for as long as they continue to exist – should serve defensive purposes, deter aggression and prevent war. We believe strongly that the further spread of such weapons must be prevented.”The statement goes on to discuss the importance of addressing nuclear threats and of preserving and complying with non-proliferation, disarmament and arms control agreements.“We each intend to maintain and further strengthen our national measures to prevent unauthorised or unintended use of nuclear weapons,” the statement reads.“We underline our desire to work with all states to create a security environment more conducive to progress on disarmament with the ultimate goal of a world without nuclear weapons with undiminished security for all.”Related ArticleFrance also released the statement, underscoring that the five powers reiterated their determination for nuclear arms control and disarmament. They would continue bilateral and multilateral approaches to nuclear arms control, it said.The declaration comes despite a UN decision last week to postpone a key arms-control meeting in New York – originally scheduled for February – due to rising COVID-19 infections.Diplomats had been scheduled to meet to review the nuclear Non-Proliferation Treaty, the 1970 accord designed to limit the spread of atomic arms.Under the accord, China, Russia, the UK, the United States and France were all granted dispensations to maintain stockpiles as long as they continued working toward the eventual elimination of nuclear weapons.The urgency to reduce the risks posed by weapons of mass destruction has come into greater focus amid recent talks designed to lower tensions between the White House and the Kremlin, which administer the world’s biggest nuclear arsenals. The two adversaries are spending billions of dollars to modernise weapons systems, even as they occasionally work together to stem proliferation of weapons technologies.The statement comes amid increased geopolitical tensions between Moscow and NATO countries over concerns about Russia’s military build-up near neighbouring Ukraine. Moscow says it can move its army around its own territory as it deems necessary.Last Thursday US President Joe Biden told his Russian counterpart Vladimir Putin that a possible move on Ukraine would draw sanctions and an increased US presence in Europe.Reuters, Bloomberg