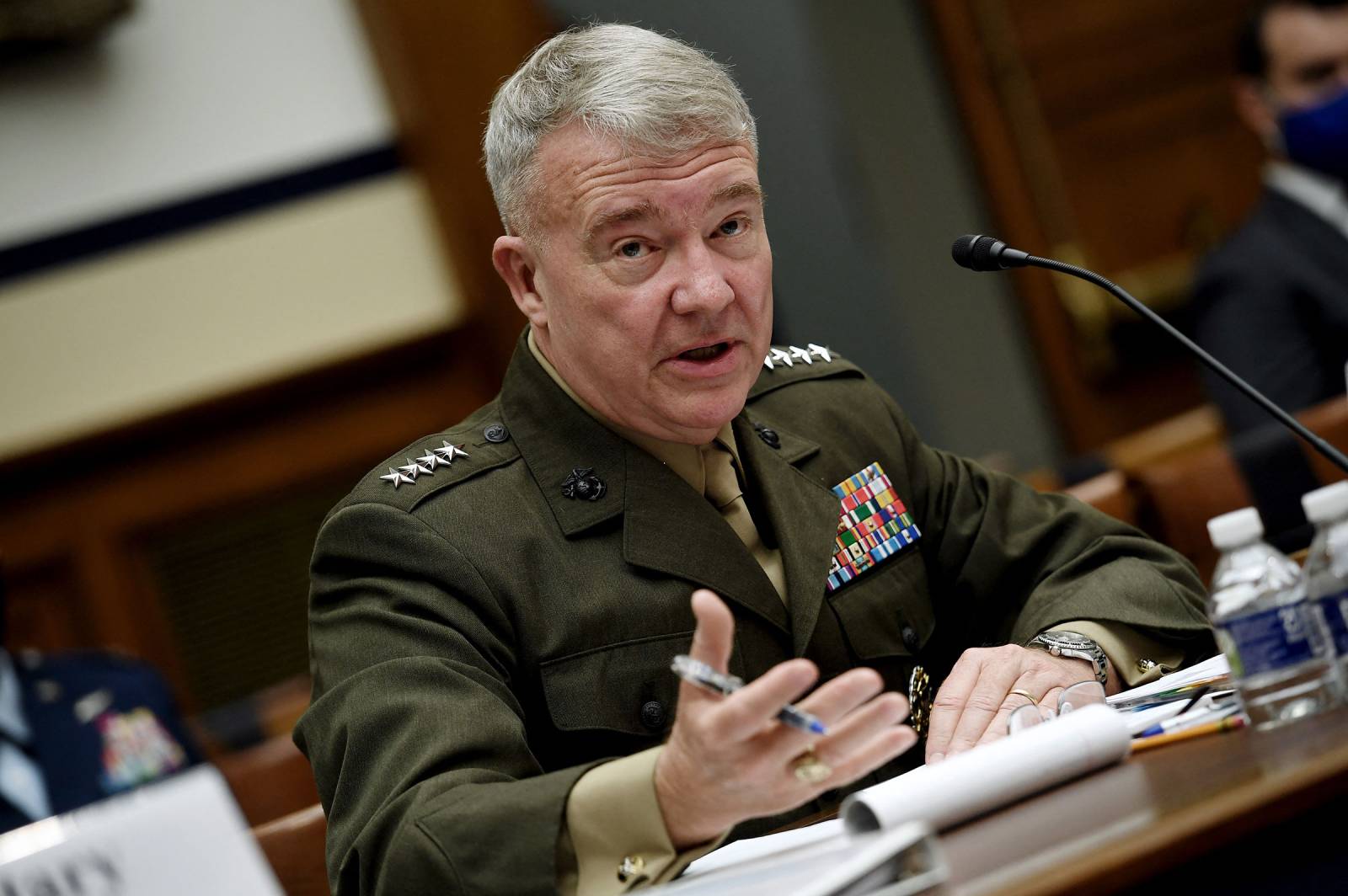 General Kenneth McKenzie Jr. responds to questions during a House Armed Services Committee hearing on the conclusion of military operations in Afghanistan on Capitol Hill in Washington, on Sept. 29, 2021. Olivier Douliery—AFP via Getty ImagesBY W.J. HENNIGAN  NOVEMBER 24, 2021 10:42 AM EST

Less than a week before world powers resume negotiations over Iran’s nuclear program, the top U.S. commander in the Middle East says his forces stand ready with a potential military option should talks fail.

“Our president said they’re not going to have a nuclear weapon,” General Kenneth McKenzie, commander of U.S. Central Command, tells TIME. “The diplomats are in the lead on this, but Central Command always has a variety of plans that we could execute, if directed.”

Iran is now further along in its nuclear weapons program than ever, producing stocks of uranium enriched to 60% purity, edging closer toward 90% weapons-grade material, according to the International Atomic Energy Agency (IAEA), the U.N. watchdog. McKenzie believes Tehran has not made the decision to press ahead with manufacturing an actual warhead, but he shares concerns with America’s Middle East allies about the progress Iran has made.

“They’re very close this time,” McKenzie says. “I think they like the idea of being able to breakout.”

The Institute for Science and International Security, a non-profit think tank that specializes in nuclear weapons analysis, issued a report in September that found Iran could produce enough fissile material to build a nuclear weapon in a month under a “worst-case breakout estimate.” After breakout begins, Iran could produce a second weapon in less than three months, then a third in less than five months.

Iran has stone-walled IAEA inspectors’ access to its facilities for months. Rafael Mariano Grossi, the agency’s director general, said Tuesday his team has been unable to access surveillance footage inside nuclear facilities and subjected to “excessively invasive physical searches.”

Even if Tehran decides to amass enough fuel for a bomb, McKenzie says, the nation hasn’t yet standardized a design for a warhead that’s small enough to be affixed atop any of its arsenal of 3,000 ballistic missiles. Nor has Iran shown that it can build a reentry vehicle capable of surviving the searing heat, pressure and vibration of falling from space back to Earth. “We haven’t seen any of that,” McKenzie says. “That’s what’s going to take a little time for them to build.” He estimates it would take Iran more than a year to develop this capability with a robust testing program.

Iran has, however, shown its missiles have a proven ability to strike targets with precision, McKenzie says. In January 2020, Iran launched more than a dozen Qiam-1 and Fateh-313 ballistic missiles from launch sites at three bases in western Iran that hit two Iraqi bases, Al Asad and Erbil, where hundreds of Americans were stationed. The missiles turned buildings, aircraft and living quarters into smoldering rubble. No one died, as most had managed to shelter in underground bunkers and trenches, but concussions from the blasts injured 109 American troops.

There have been no formal international negotiations with Tehran since June, a month before Ebrahim Raisi was elected as Iran’s president. The new hardline leader has sought more favorable terms on the nuclear deal, insisting that the U.S. remove all economy-crippling sanctions in exchange for Iran halting its nuclear activities. He maintains the nation’s nuclear program is peaceful and accuses U.S.-ally Israel of carrying out unprovoked military strikes, including assassinating Iranian scientists and attacking facilities. One such attack knocked out the IAEA camera systems at the location.

Israel has neither confirmed nor denied these allegations but has long voiced its displeasure with the JCPOA. “Even with the return to an agreement, Israel is of course not part of the agreement. Israel is not bound by it,” Israeli Prime Minister Naftali Bennett said Tuesday. “We will maintain our freedom to act.”

When President Donald Trump abrogated the 2015 nuclear agreement in May 2018, his administration turned the global financial system into a weapon against Tehran. His “maximum-pressure campaign” resulted in more than 1,500 sanctions against Iran along with companies and individuals who did business there, including the nation’s central bank, national oil company and other vital sectors of its economy. It triggered an exodus of corporations and financial institutions that would rather abandon their investments in Iran than risk U.S. Treasury Department sanctions. Iran’s economy-sustaining oil exports plunged to historic lows.

The Biden Administration has shown a willingness to roll back some penalties, but the prospect of easing terrorism-related sanctions is politically problematic. If the President removes them, he will almost certainly be criticized for looking soft. “There is no legal barrier to how far the President can go in undoing Trump’s sanctions, but the political cost in certain areas is prohibitive,” says Ali Vaez, the Iran project director at the International Crisis Group. “A narrow path remains open, but the odds of a diplomatic breakthrough are not looking promising at all.”

Republicans, Israel and Gulf nations have all pressured the White House to address what they say are Iran’s “malign activities.” Tehran is involved in every serious conflict in the Middle East, almost always on the side of America’s enemies. On Oct. 20, for instance, U.S. officials say Iranian-linked fighters launched a drone attack against a U.S. military base at al-Tanf in eastern Syria. There were no U.S. casualties, but buildings were destroyed. “We had a little bit of luck,” McKenzie says. “We’re in the middle of a battle drill. We had people out manning positions, so no one was killed as a result of that. But that is solely due to our action and not the action of the enemy, who was clearly trying to kill Americans.”

There is no dispute among Biden officials that Iran is a bad actor intent on expanding its influence in the Middle East, either directly as its military forces and Iranian-backed political groups have done in Iraq and Syria, or by funding and equipping proxies such as Hezbollah in Lebanon and Hamas in Palestine. The question is how much the Biden Administration is willing to tolerate to restore the nuclear deal.

Removing economic pressure on Tehran is not currently part of the negotiations set to restart next week. In response to Iran’s insistence that all U.S. sanctions be lifted, Secretary of State Antony Blinken publicly questioned Iran’s willingness to pursue diplomacy and implied an ultimatum if Iran chooses not to “engage in a meaningful way and get back into compliance.” The U.S. and other JCPOA signatories—Russia, China, Germany, Britain, and France—will consider “all of the options necessary to deal with this problem,” Blinken told CNN on Oct. 31.

There are no great options, says Henry Rome, an Iran expert at the Eurasia Group consulting firm. “In theory, there are four options: Iran getting a bomb, Iran getting bombed, Iran restraining its program through diplomacy, or Iran hovering on the edge of those three at the same time,” he says. “At this point in time, we’re in that uncomfortable position where diplomacy is not working and the bomb/be bombed options are unacceptable. It’s not a sustainable position, but it’s where we are right now.”

Even before Trump took office, the U.S. was responding to Iran’s regional expansion with military, intelligence and diplomatic countermeasures. Trump’s decision to unilaterally walk away from the nuclear deal accelerated the confrontation, but the willingness for talks indicates the two nations see some value in de-escalating tensions.

McKenzie believes it’s best to take a multilateral approach. “We have made a conscious decision to work this through diplomatic channels, he says. “And I would just tell you, it’s better to approach it from a collective perspective, rather than as a single problem, as we did for awhile.”