The US has numerous protecting power arrangements in countries where it does not have a diplomatic presence. Those notably include Switzerland in Iran, Sweden in North Korea and the Czech Republic in Syria. 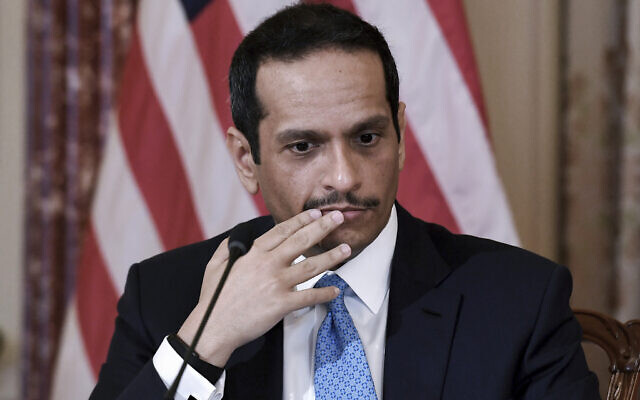 In joint statement, countries pledge to ‘improve humanitarian and economic conditions for all’; Qatar agrees to represent US interests in Afghanistan

The United States and Qatar said on Saturday that they remain “deeply concerned” about the West Bank and Gaza and vowed to continue working together to “improve humanitarian and economic conditions for all.”

The two countries also reiterated “the importance of achieving a two-state solution to the Israeli-Palestinian conflict,” in a joint statement on Saturday following a meeting the previous day between US Secretary of State Antony Blinken and Qatar’s Deputy Prime Minister and Minister of Foreign Affairs Sheikh Mohammed bin Abdulrahman Al Thani.

The two met in Washington on Friday for the fourth annual US-Qatar Strategic Dialogue summit where they discussed a range of regional and global affairs including security cooperation, labor and human rights, health and humanitarian assistance, and recent events in Afghanistan.

Qatar agreed to represent the US in Taliban-run Afghanistan following the closure of the American Embassy in Kabul and the withdrawal of all US forces from the country in late August.

Blinken and Al-Thani said Qatar will serve as the US “protecting power” in Afghanistan. The announcement is a clear indication the Biden administration doesn’t intend to reopen the embassy anytime soon after bringing America’s longest-running war to an end after 20 years.Get The Times of Israel’s Daily Editionby email and never miss our top storiesNewsletter email addressGET ITBy signing up, you agree to the terms

The protecting power agreement means Qatar will set up a US “interests section” within its own embassy in Kabul to handle consular services for American citizens in Afghanistan, deal with routine official communications between Washington and the Taliban government, and assume responsibility for the protection of now-vacated US diplomatic facilities there.

Qatar has been a key player in discussions between the Taliban and the United States for many years. It hosted months of US-Taliban peace talks and has since been critical to the evacuation of American citizens and others from AfghanistanADVERTISEMENThttps://3baa0f45e9ecc334cf2d59909d31b0c5.safeframe.googlesyndication.com/safeframe/1-0-38/html/container.html

In their joint statement, Blinken and Al-Thani said they discussed the “extraordinary teamwork” between the two countries to relocate from Afghanistan more than 60,000 US citizens, permanent residents, special via holders and at-risk Afghans to the US via Qatar. According to the statement, political developments in the region, including in Syria, Yemen and the Horn of Africa, were also discussed.

Regarding the West Bank and Gaza, Blinken and al-Thani said their respective countries “remain deeply concerned” and “will continue to work together to improve humanitarian and economic conditions for all, and discussed the importance of achieving a two-state solution to the Israeli-Palestinian conflict,” the statement read, without further elaboration.

Qatar has pledged some $500 million for Gaza’s reconstruction after the coastal enclave was battered by Israeli airstrikes in 11 days of hostilities between the Jewish state and Palestinian terrorists in May.

Qatar is a key backer of the Islamist terror group Hamas that controls the Gaza Strip.

Al-Thani said at the time that Qatar would continue to support Palestinians so as to reach “a just and lasting solution by establishing their independent state in accordance with the Arab Peace Initiative,” referring to a Saudi-backed peace initiative first offered in 2002.

Qatar has funneled cash into the blockaded, Hamas-ruled enclave for years with Israeli approval. The Gulf state had already pledged $360 million in aid to Gaza at the beginning of the year.