China tested two hypersonic “space nukes” earlier this year that demonstrated technology the US is struggling to understand. 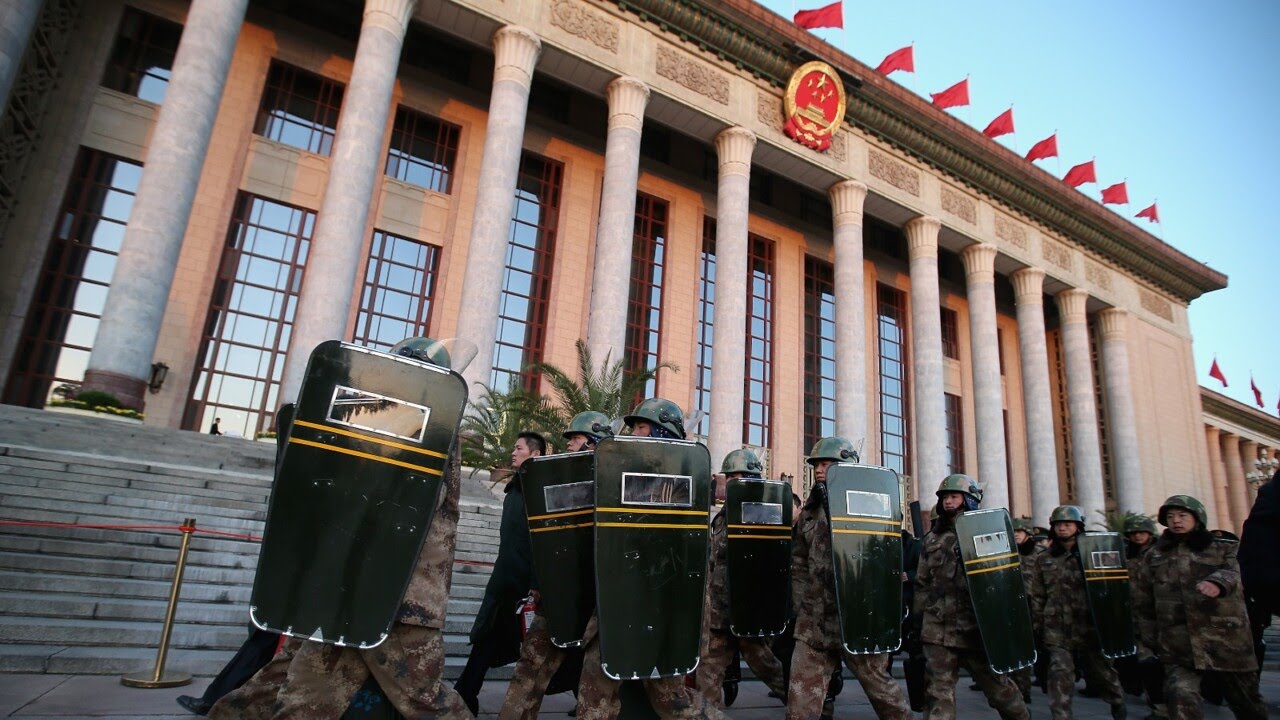 News host Catherine McGregor says China “continues to behave in an ominous fashion” as reports emerge of a hypersonic missile test. Ms McGregor said there have been warnings of the “grave dangers” of attacks between the United States and China over Taiwan and they “will inevitably involve Australia”. “My view has always been that appeasement will guarantee military action against Taiwan by China,” she said. “While on the other hand, closer cooperation with regional partners such as India, Japan and South Korea may preserve the existing order or some semblance of peace.” Ms McGregor said the recently announced AUKUS treaty has “generated animated discussion in Australia and predictable ham-fisted abuse from Beijing” as it brings the US, United Kingdom, and Australian armies closer. “But military cooperation is only as useful as the will and capabilities of the partners,” she said.

China tested two hypersonic “space nukes” earlier this year that demonstrated technology the United States does not currently possess and is struggling to understand, with claims the weapons appeared “to defy the laws of physics”.

The Financial Times first reported over the weekend that China had tested a nuclear-capable hypersonic glide vehicle in August which had circled the globe in low-orbit space before landing, missing its target by about 40km.

The paper has now clarified that China actually launched two such tests, in July and August, with the first test said to have stunned US intelligence officials at the Pentagon because it demonstrated a brand new weapons capability.null

“One person said government scientists were struggling to understand the capability, which the US does not currently possess, adding that China’s achievement appeared ‘to defy the laws of physics’,” the Financial Times reported.

China has denied the reports, saying the launches were routine spacecraft tests.

But they are more manoeuvrable than their ballistic counterparts and can trace a low trajectory in the atmosphere, making them harder to defend against.

US missile defence systems are designed to target the fixed parabolic trajectory of traditional intercontinental ballistic missiles (ICBMs), which launch up and down like a cannonball.

China appears to have taken the technology one step further by first launching a rocket carrying the hypersonic glide vehicle in low orbit. The glide vehicle then separates from the rocket and manoeuvres towards its target.

The rocket system is known as fractional orbital bombardment, a technology originally developed by the Soviet Union in the 1960s but later abandoned – “fractional” because it was not designed to go into a full orbit of the Earth.

The Wall Street Journal on Wednesday reported that US Air Force Secretary Frank Kendall appeared to allude to China’s new hypersonic missile in a September 20 speech, saying Beijing was developing the capability to launch “global strikes from space”.

“There is a potential for weapons to be launched into space, then go through this old concept from the Cold War called the fractional orbital bombardment system … which is a system that basically goes into orbit and then de-orbits to a target,” Mr Kendall said.

Experts have cautioned that the new tech is outmatched by China’s existing nuclear arsenal. China is thought to have several hundred warheads and has been building silos for ICBMs.

The US nuclear stockpile stood at 3750 as of September 2020, down from 3805 a year earlier, the State Department revealed earlier this month in a reversal of the Trump administration policy to keep those numbers secret.

“US ballistic missile defences are not deployed or scaled to counter China’s existing nuclear weapon capabilities. US missile defence warning systems and counter measures are designed to complicate ballistic missile launches against the US, though, so there is a foundation to expand if a decision was taken to counter growing Chinese capabilities.”

Mr Shoebridge said other launch approaches and warhead delivery systems such as fractional orbital bombardment systems combined with hypersonic glide vehicles would “very likely be detectable, but defence systems would need to be directed to the different challenges of these alternative means of attack”.

The US, China and Russia are all developing hypersonic missile technology.

On Thursday, the US Navy said it had successfully tested a hypersonic missile the previous day at a NASA facility in Wallops, Virginia describing it as a “vital step in the development of a Navy-designed common hypersonic missile”.

“This test demonstrated advanced hypersonic technologies, capabilities, and prototype systems in a realistic operating environment,” the Navy said in a statement.

In 2019, China unveiled a hypersonic medium-range missile, the DF-17, which can travel around 2000km and can carry nuclear warheads.

Russia recently launched a hypersonic missile, the Zircon, from a submarine, and since late 2019 has had the hypersonic nuclear-capable Avangard missiles in service. The Avangard can travel at up to Mach 27, changing course and altitude.

The Pentagon hopes to deploy its first hypersonic weapons by 2025 and has said their development is one of its “highest priorities”.

The Financial Times’ revelation over the weekend sparked a global debate about China’s rapid weapons development.

On Sunday, the Chinese Communist Party’s Global Times mouthpiece, without confirming the reports, editorialised that the news had delivered a fresh blow to the United States’ “strategic superiority”, and warned China’s takeover of Taiwan was inevitable.

Ambassador Robert Wood, US permanent representative to the Conference on Disarmament, expressed concern following the reports.

“We are very concerned by what China has been doing on the hypersonic front,” Mr Wood told AFP.

He said Russia also had hypersonic technology and while the United States had held back from developing a military capacity in this field, it now had no choice but to respond in kind.

“If you’re a country that’s the target of that, you’re going to want to figure out a way to defend yourself from that,” he said.

“And so we start looking at what other applications and defensive applications can you bring to hypersonic technology — and so that continues to things to accelerate the arms race.”

Republican Senator Lindsey Graham on Tuesday requested a briefing from defence and intelligence officials, saying if the reports were accurate then it was a “military game-changing event that the United States simply cannot ignore”.

“At the surface, there seems to be two options for us as a legislative body. We can attempt to convince China to stand down to avoid a nuclear arms race, which is unlikely, or we can decide to make the required investments needed to neutralise the advantage that a hypersonic nuclear-capable missile would provide to China.”

Admiral Charles Richard, the head of US Strategic Command who oversees the country’s nuclear weapons, told the military newspaper Stars and Stripes earlier this week that China’s nuclear capability was advancing at breathtaking pace.

“It almost seems like we can’t go through a month without some new revelation coming about China,” he said. “I am not surprised at reports like this. I won’t be surprised when another report comes next month.”

The US has not officially confirmed the intelligence reports about China’s missile tests.

But on Wednesday, President Joe Biden responded “yes” when asked if he was worried about the threat of hypersonic weapons, and State Department spokesman Ned Price said the US was “deeply concerned” at China’s nuclear capabilities, including its development of “novel delivery systems”.

On Monday, Chinese Foreign Ministry spokesman Zhao Lijian was asked about the Financial Times report. He described it as a “routine test of spacecraft to verify technology of spacecrafts’ reusability”.

Mr Zhao said the test was “of great significance to reducing the cost of using spacecraft and providing a convenient and cheap way for mankind’s two-way transportation in the peaceful use of space”.

“Several companies around the world have conducted similar tests,” he said.

“After separating from the spacecraft before its return, the supporting devices will burn up when it’s falling in the atmosphere and the debris will fall into the high seas. China will work with other countries in the world for the peaceful use of space for the benefit of mankind.”

Mr Austin warned that the militarisation of hypersonic technology by China and Russia would intensify the arms race.

“China will never be engaged in nuclear arms race with any country,” Mr Wang said.

“The sole aim of China’s development of necessary military capabilities is to safeguard its legitimate security interests. China’s growth strengthens the force for world peace. No country will be threatened by China’s national defence capability as long as it does not intend to threaten or undermine China’s sovereignty, security and territorial integrity.”