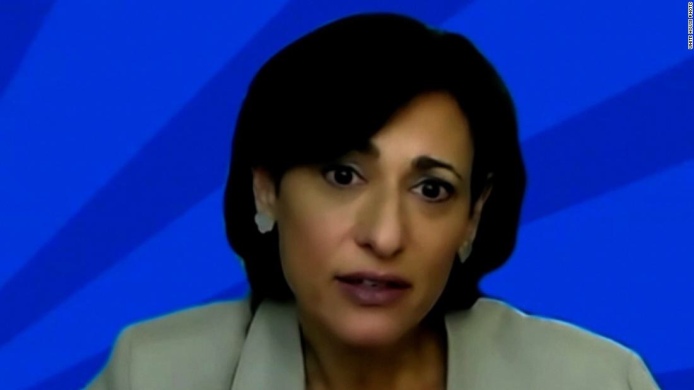 Centers for Disease Control and Prevention Director Rochelle Walensky went off script at a briefing Monday and made an emotional plea to Americans not to let up on public health measures amid fears of a fourth wave.

What they’re saying: “I’m going to reflect on the recurring feeling I have of impending doom,” Walensky said, appearing to hold back tears. “We do not have the luxury of inaction. For the health of our country, we must work together now to prevent a fourth surge.”

Driving the news: The White House coronavirus response team is seeking to confront the current dichotomy in the U.S., in which immense optimism from the speed of the vaccine rollout must be balanced with continued restraint in moving forward with normalcy.

• “The thing that’s different this time is we actually have it in our power to be done with this scale of vaccination and that will be so much slower if we have another surge to deal with as well,” Walensky said.

The big picture: Coronavirus cases are rapidly rising in places including Michigan, New York, New Jersey and other Northeastern states, partially a result of variants of the virus becoming more widespread, experts say. An uptick in travel and states loosening restrictions are also factors.

• Even though a remarkable 72% of Americans 65 and older have received at least one dose of the vaccine, millions of Americans — particularly younger Americans with underlying conditions — remain vulnerable.

What to watch: Walensky said she is speaking with governors tomorrow to address the rise in cases.

• “We’re essentially pleading with people even though we have an urge particularly with the warm weather to just cut loose,” NIAID director Anthony Fauci said.

• “We’ve just got to hang in there a bit longer,” he said. “I think the reason we’re seeing this plateauing and the increase that I hope doesn’t turn into a surge is because we are really doing things prematurely right now with regard to opening up.”