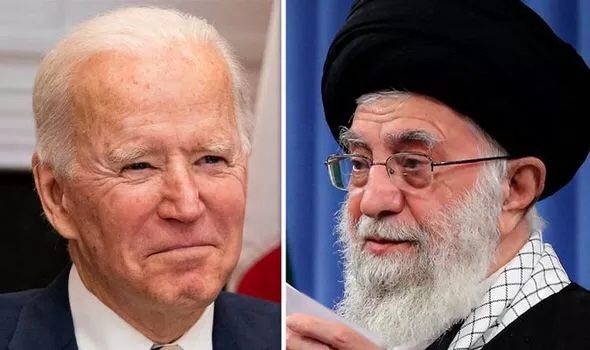 IRAN’S Supreme Leader Ali Khamenei has called on the country to restart uranium enrichment as of “today” as US relations continue to deteriorate.

The Ayatollah posted on his Twitter account calling on Iran to resume its uranium enrichment programme despite its 2015 nuclear deal capping production. It follows a surge in Tehran and Washington tensions after US President Joe Biden ordered an airstrike on a Iran-backed militia in Syria.

Posting to his official account, Mr Khamenei insisted Iran must start enriching uranium in spite of the nuclear accord.

He said: “When oil finishes, it will become common to use nuclear energy that is cleaner & cheaper to produce.

“Enrichment can’t start at that time; we need to start today.

“The Arrogant West wants Iran to be dependent on them the day it needs nuclear energy.”

On Sunday, Tehran said they do not consider the time to be “suitable” to resume talks with Washington after the EU proposed an informal meeting over the Joint Comprehensive Plan of Action (JCPOA).

Foreign ministry spokesman Saeed Khatibzadeh said in a statement: “Considering the recent positions and actions of the United States and the three European countries, (Iran) does not consider the time suitable to hold the informal meeting proposed by the European coordinator.

“There has still been no change in the US positions and behaviour yet”.

The spokesman then claimed the Biden administration has continued “Trump’s failed policy of maximum pressure”, and added: “America must end its illegal and unilateral sanctions and return to its (deal) commitments.

“This needs neither negotiations nor resolutions.”

Ned Price, US State Department spokesman, said the US is still willing to engage in talks with Iran, and is not “dogmatic” about the format of talks so long as the UK and other signatories of the JCPOA were involved.

But in a warning to Iran, he added: “What we are dogmatic about is the fact that Iran can never be allowed to acquire a nuclear weapon.”

Iran and Mr Khamenei have insisted the nuclear programme is not to develop weapons but rather to provide energy, with the Ayatollah saying the US has an ulterior motive in curbing uranium enrichment due to the sale of oil.

He said on Twitter: “The West is taking barrels & barrels of oil now at a low price & yet still making more demands!

“If they owned the oil & we wanted to buy from them, they would sell it to us in bottles at high prices!

“They want to do this with nuclear energy. No! Enrichment is one of our needs.”

In 2015, Iran, the US and five other global powers agreed terms to lift sanctions on Tehran in exchange for curbs on uranium enrichment under the JCPOA.

Former US President Donald Trump walked away from the agreement in 2018, reimposing sanctions on Iran who in turn resumed their nuclear programme.

Mr Biden stated in the lead up to last years US election he wanted to return to the JCPOA, but only if Iran agreed to reimpose restrictions before beginning talks with the US.

Mr Khamenei refused to do so, and has since said the “ball is in their court” for restarting talks on the JCPOA.

It follows Iran and US tensions flaring over a series of airstrikes and missile attacks on militia and army bases in Syria and Iran.

Iranian-backed militias carried out three attacks on US and coalition military bases based in Iran throughout February.

In response, Mr Biden ordered an airstrike on Syria-based militia structures, killing one person according to the Pentagon.

The Syrian Observatory for Human Rights, a monitoring group based in London, had said the US attack killed at least 22 fighters.

Mr Khatibzadeh said in response he considered the attack a “clear aggression against Syria’s sovereignty and territorial integrity” and a “violation of international law.”