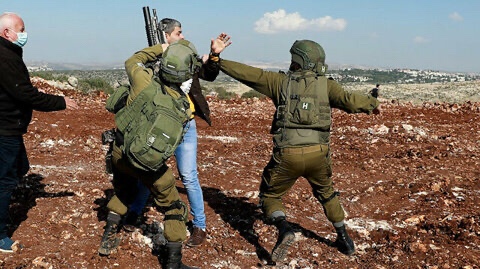 Leading Hamas member detained in raid on his home in Nablus

Israeli forces rounded up 20 Palestinians in overnight raids across the occupied West Bank, according to a Palestinian NGO on Monday.

She said influential figures were among those detained, but without giving any further details. “Other people were summoned by the Israeli intelligence service for questioning,” Sarhana said.

According to local residents, leading Hamas member Mustafa al-Shannar, a lecturer at An-Najah University, was detained during a raid on his home in the West Bank city of Nablus.

Al-Shannar had previously been detained by the Israeli military.

Hamas, which rules the Gaza Strip, has earlier warned of Israeli plans to stage a mass arrest campaign against the resistance group ahead of the Palestinian elections later this year.

Last month, senior Hamas members Hatem Naji Amr and Omar Barghouthi told Anadolu Agency that they were threatened by the Israeli intelligence of imprisonment if they run in the upcoming elections.

Palestinians are scheduled to vote in the legislative elections on May 22, presidential polls on July 31 and the National Council on Aug. 31.

The last legislative elections were held in 2006 in which Hamas won the majority.

Ahmed Asmar contributed to this report from Ankara