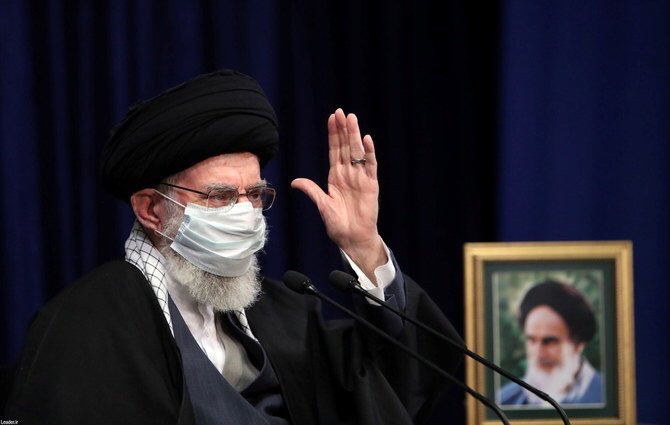 Why Khamenei’s nuclear fatwa is worthless

The Iranian regime has long claimed that its nuclear program is only meant for peaceful purposes, rather than to obtain nuclear weapons. It believes that the world should accept its claim because Supreme Leader Ali Khamenei has in the past issued a fatwa forbidding the production or use of nuclear weapons.

Khamenei reportedly wrote in a 2010 letter to the International Conference on Nuclear Disarmament that: “We consider the use of such weapons as haram (religiously forbidden) and believe that it is everyone’s duty to make efforts to secure humanity against this great disaster.” The supreme leader also states on his official website that the production and use of nuclear weapons are banned by Islamic laws: “Both Shariah and aqli (related to logic and reason) fatwas dictate that we do not pursue them.”

When Iran’s leaders meet with world leaders, they frequently and conveniently refer to Khamenei’s words, using them to explain why Tehran is not seeking a nuclear bomb. For example, when Foreign Minister Javad Zarif met with US Sen. Rand Paul in 2019, he told him about Iran’s unwillingness to seek nuclear weapons precisely because of this fatwa.

Putting Iran’s clandestine nuclear activities aside, Khamenei’s fatwa has unfortunately become something that not only Iran’s leaders, but also other world leaders, use to insist that Tehran’s nuclear program is peaceful. For instance, former US President Barack Obama, in an attempt to seal the Joint Comprehensive Plan of Action nuclear deal, declared in his address to the UN General Assembly in 2013 that: “The Supreme Leader has issued a fatwa against the development of nuclear weapons.” Former US Secretary of State John Kerry also said: “The supreme leader says he has issued a fatwa, the highest form of Islamic prohibition against some activity, and he said that is to prohibit Iran from ever seeking a nuclear weapon.”

Hillary Clinton added her support by further pushing the narrative of the Iranian regime. According to her: “The other interesting development which you may have followed was the repetition by the Supreme Leader Ayatollah Khamenei that they would — that he had — issued a fatwa against nuclear weapons, against weapons of mass destruction… I have discussed this with a number of experts and religious scholars.”

Iran’s constitution was written in a way that allows the government to prioritize codified laws over religious fatwas.

But any scholar or astute observer of the Islamic Republic would be cognizant of the fact that fatwas issued by the supreme leader are more like political statements aimed at ensuring the regime’s survival rather than “the highest form of Islamic prohibition.” For one thing, Iran’s founding father and its first supreme leader, Ayatollah Khomeini, issued fatwas that he later modified. So what is there to prevent Khamenei from changing his fatwa on banning nuclear weapons?

More fundamentally, although the Islamic Republic stresses the significance of Islamic law, its leaders wrote Iran’s constitution in a way that allows the government to prioritize codified laws over religious fatwas. According to article 167 of the constitution, “the judge is bound to endeavor to judge each case on the basis of the codified law.” It adds: “In case of the absence of any such law, he has to deliver his judgment on the basis of authoritative Islamic sources and authentic fatwa.”

In other words, just as the Iranian parliament recently passed a law banning monitors from the International Atomic Energy Agency inspecting Iran’s nuclear sites, it could also pass a law allowing the government to pursue nuclear weapons for the survival of the Islamic Republic. Such a law would override Khamenei’s fatwa, according to the Iranian constitution.

This also shows that the main goal of the Islamic Republic’s constitution was not to implement Islamic laws, but to ensure the power of the theocratic establishment. Even Khomeini mentioned on several occasions that Islamic laws could be ignored if necessary. He pointed out that “the government is empowered to unilaterally revoke any Shariah agreements which it has concluded with the people when these agreements are contrary to the interest of the country or Islam.” On another occasion, Khomeini stated that “the government can prevent Hajj, which is one of the important divine obligations, on a temporary basis, in cases when it is contrary to the interests of the Islamic country.”

That is why Iranian Intelligence Minister Mahmoud Alavi, who is a close adviser to Khamenei, pointed out this month that Iran may in fact pursue nuclear weapons despite the supreme leader’s fatwa. He said: “I must make it clear that, if a cat is pushed into the corner, it may behave differently from a cat that walks freely. If Iran is pushed into a corner, it will not be its fault (i.e., the pursuit of nuclear weapons) but rather the fault of those pushing it.”

In spite of the Iranian leaders’ rhetoric, the evidence shows that Iran’s nuclear program is not intended for only peaceful purposes.

Disclaimer: Views expressed by writers in this section are their own and do not necessarily reflect Arab News’ point-of-view