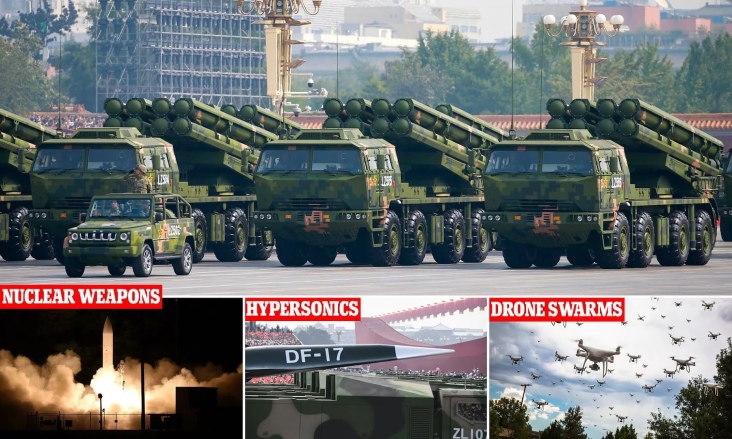 China’s drive for military supremacy: Beijing’s armoury of weapons and the terrifying missiles so high-tech that they are almost impossible to stop

By Ian Birrell And Glen Owen For The Mail On Sunday

China is spending huge sums to create hypersonic missiles that will go so fast (up to twenty times the speed of sound) that military chiefs believe they will be invulnerable to any form of defence.

Indeed, some analysts fear that human capability to respond to such lethal weapons will be inadequate and that the only way to protect against them would be to rely on artificial intelligence and computer systems.

Travelling several miles a second as they deliver surprise attacks within minutes of being launched, they have been described as a ‘game-changer’ for warfare.

Although America, too, has such Star Wars-style weapons in development, General John E. Hyten, commander of US Strategic Command, told a Senate committee three years ago: ‘We don’t have any defence that could deny the employment of such a weapon against us.’

Such missiles, capable of carrying nuclear warheads, would deliver precision attacks on people, vehicles and buildings.

To test such weapons, the Beijing government said three years ago it was building a wind tunnel that simulated conditions up to 25 times the speed of sound. And a contractor has said it has carried out a six-minute test flight for a hypersonic missile.

The complexities of developing hypersonics – using sophisticated sensors, guidance systems and innovative propulsion methods – have been compared to building the atomic bomb.

This is a revolutionary material with enormous defence and manufacturing potential. One atom thick and the thinnest and lightest material known to man, it conducts heat, absorbs light, stretches and is 200 times stronger than steel.

It was invented by researchers in 2004 at Manchester University – with China’s President Xi Jinping having made an official visit to their lab.

Among its military applications are as coatings on ballistic missiles, wiring in hypersonic vehicles exposed to high temperatures, camouflage of vehicles and body armour for troops.

Chinese troops take part in marching drills ahead of an October 1 military parade to celebrate the 70th anniversary of the founding of the People’s Republic of China at a camp on the outskirts of Beijing, China, on September 25, 2019

Chinese reports suggest that the Z-10 attack helicopter – a rival to Boeing’s Apache – has been equipped with graphene armour developed at the Beijing Institute of Aeronautical Materials. The institute has ties to three universities in Britain, where it collaborates on two centres specialising in research into the use of graphene in the aerospace industry.

Chinese media have reported plans to use graphene coatings on military installations on artificial islands built in the South China Sea, an area where Beijing has controversially deployed Jin-class ballistic missile submarines armed with nuclear missiles.

Democrats are Castrating their own man

No Way Out: Why the Bowls of Wrath are Coming: Revelation 16

Pentagon will wait before blaming Iran for attacks in Iraq