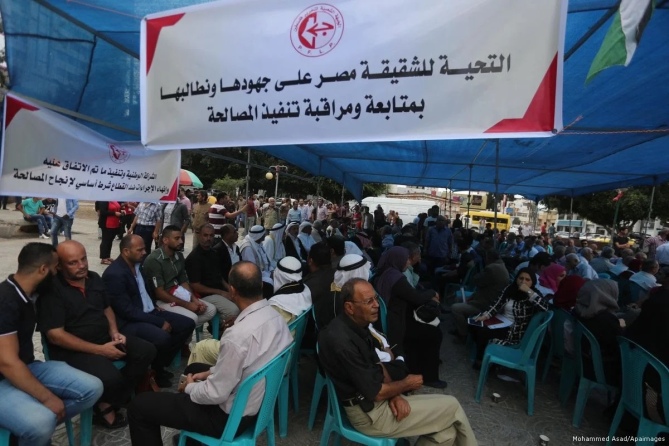 A member of the political bureau of the Popular Front for the Liberation of Palestinian (PFLP) said on Sunday that the Palestinian Authority sanctions on the Gaza Strip “are disastrous”, Shehab news agency has reported. Speaking exclusively to Shehab, Mariam Abu Dagga insisted that the sanctions “must be lifted” as soon as possible.

She added that the salaries of the public servants in Gaza must be paid and all of PA President Mahmoud Abbas’s decisions on nominations for judges “must be” cancelled.

The PFLP official said that the Election Court has to be formed very soon in order to ensure that there are no obstacles ahead of the elections. She also stressed the view that the PLO represents 13 million Palestinians inside Palestine and in the diaspora, so its president should not be the same person as the president of the PA.

The PFLP, Abu Dagga pointed out, would have liked to have seen a comprehensive national dialogue and the rearrangement of the Palestinian institutions before issuing the election decree. Criticising the PA’s disrespect for the recommendations made at the secretaries-general conference three months ago, she emphasised the importance of having a national leadership that respects Palestinian ambitions and rights.

“We need a transparent democratic process based on the outcomes of national understanding,” concluded Abu Dagga. “This needs a discussion of all the outstanding issues and agreement on a national code of conduct that guarantees that the results of the elections will be respected, whatever they are.”