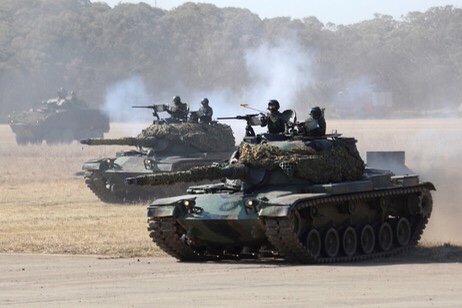 “We urge Beijing to cease its military, diplomatic, and economic pressure against Taiwan and instead engage in meaningful dialogue.”

Ambassador Kelly Craft accompanied the tweet with a photo of herself in the U.N. General Assembly Hall where the island is banned. She carried a handbag with a stuffed Taiwan bear sticking out of the top, a gift from Taiwan’s representative in New York, Ambassador James Lee.

Taiwan and China separated amid civil war in 1949 and China says it is determined to bring the island under its control by force if necessary. The U.S. switched diplomatic recognition from Taipei to Beijing in 1979, but is legally required to ensure Taiwan can defend itself and the self-governing democratic island enjoys strong bipartisan support in Washington.

Tsai has sought to bolster the island’s defenses with the purchase of billions of dollars in U.S. weapons, including upgraded F-16 fighter jets, armed drones, rocket systems and Harpoon missiles capable of hitting both ships and land targets. She has also boosted support for Taiwan’s indigenous arms industry, including launching a program to build new submarines to counter China’s ever-growing naval capabilities.

China’s increased threats come as economic and political enticements bear little fruit, leading it to stage war games and dispatch fighter jets and reconnaissance planes on an almost daily basis toward the island of 24 million people.

US Bases Hit by Rockets Again