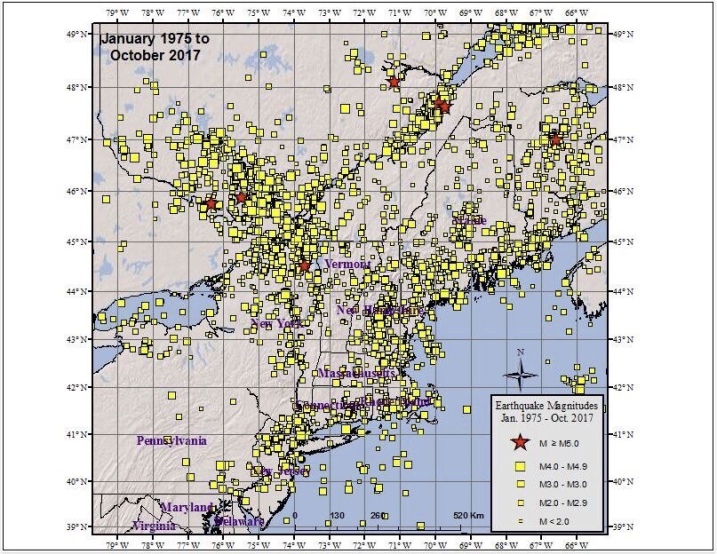 The History of Earth­quakes In New YorkBy Meteorologist Michael Gouldrick New York State PUBLISHED 6:30 AM ET Sep. 09, 2020 PUBLISHED 6:30 AM EDT Sep. 09, 2020New York State has a long history of earthquakes. Since the early to mid 1700s there have been over 550 recorded earthquakes that have been centered within the state’s boundary. New York has also been shaken by strong earthquakes that occurred in southeast Canada and the Mid-Atlantic states.

Courtesy of Northeast States Emergency ConsortiumThe largest earthquake that occurred within New York’s borders happened on September 5th, 1944. It was a magnitude 5.9 and did major damage in the town of Massena.A school gymnasium suffered major damage, some 90% of chimneys toppled over and house foundations were cracked. Windows broke and plumbing was damaged. This earthquake was felt from Maine to Michigan to Maryland.Another strong quake occurred near Attica on August 12th, 1929. Chimneys took the biggest hit, foundations were also cracked and store shelves toppled their goods.In more recent memory some of the strongest quakes occurred On April 20th, 2002 when a 5.0 rattled the state and was centered on Au Sable Forks area near Plattsburg, NY.Strong earthquakes outside of New York’s boundary have also shaken the state. On February 5th, 1663 near Charlevoix, Quebec, an estimated magnitude of 7.5 occurred. A 6.2 tremor was reported in Western Quebec on November 1st in 1935. A 6.2 earthquake occurred in the same area on March 1st 1925. Many in the state also reported shaking on August 23rd, 2011 from a 5.9 earthquake near Mineral, Virginia.

Earthquakes in the northeast U.S. and southeast Canada are not as intense as those found in other parts of the world but can be felt over a much larger area. The reason for this is the makeup of the ground. In our part of the world, the ground is like a jigsaw puzzle that has been put together. If one piece shakes, the whole puzzle shakes.In the Western U.S., the ground is more like a puzzle that hasn’t been fully put together yet. One piece can shake violently, but only the the pieces next to it are affected while the rest of the puzzle doesn’t move.In Rochester, New York, the most recent earthquake was reported on March 29th, 2020. It was a 2.6 magnitude shake centered under Lake Ontario. While most did not feel it, there were 54 reports of the ground shaking.So next time you are wondering why the dishes rattled, or you thought you felt the ground move, it certainly could have been an earthquake in New York.Here is a website from the USGS (United Sates Geologic Society) of current earthquakes greater than 2.5 during the past day around the world. As you can see, the Earth is a geologically active planet!Another great website of earthquakes that have occurred locally can be found here.To learn more about the science behind earthquakes, check out this website from the USGS.