On 27 November, Iranian nuclear scientist Mohsen Fakhrizadeh was assassinated; the killing has been assumed widely to have been the work of Israel. While some people expected an immediate response from Iran against Israel, others applauded the murder, believing that it will hinder Iran’s nuclear programme. What happened goes beyond Iran, though, and affects every country trying to develop its own nuclear programme.

Covert operations are normal when regional and global rivals have the ability to harm each other. Responses are also usually covert. We should not, therefore, wait to see what Iran does. We know that while it does not want war, it will not tolerate breaches of its sovereignty. It may well be adopting the same approach that China uses in its relations with the US; despite threats, provocations and sanctions, it just keeps its head down and gets on with it. 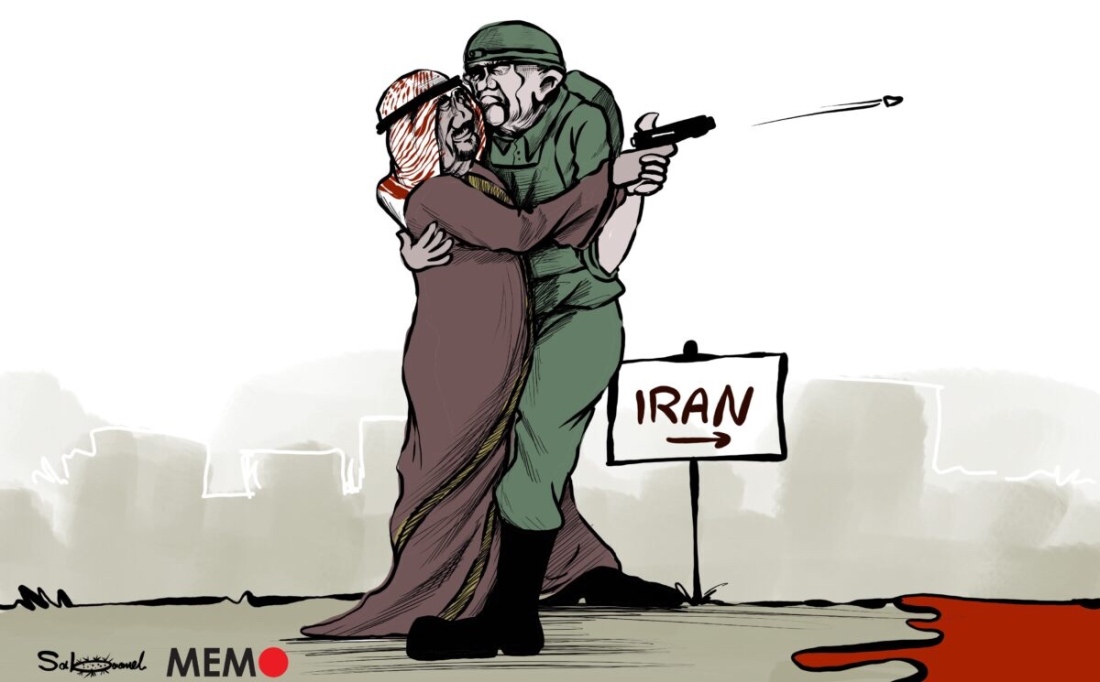 The killing of Iranian scientist Mohsen Fakhrizadeh and how Israel and Saudi Arabia might be behind it? – Cartoon [Sabaaneh/MiddleEastMonitor]

Iran is avoiding direct confrontation with any country for the time being because it knows that its nuclear facilities will be prime targets in an open armed conflict. That would set back its goal of having nuclear capabilities for its missiles with which it hopes to be a real power in the Middle East. As such, talk about an imminent Iran-Israel war due to Fakhrizadeh’s assassination, or a US-Iran war connected directly to America’s assassination of Quds Force commander General Qasem Soleimani last January, is speculation.

Many countries, including Arab states, applauded the latest assassination of a key Iranian figure in the belief that this would disrupt Tehran’s nuclear project, but they are wrong. The programme may be delayed, but the project is not built around one person; it is a collaborative effort.

Fakhrizadeh was killed not simply because he was Iranian, but because he was working to develop his country’s nuclear capabilities. The original nuclear club — the US, Britain, Russia, France and China — are determined not to let another India or Pakistan develop nuclear weapons. Those two sneaked in under the radar, much to the annoyance of the permanent members of the UN Security Council, none of whom dare say anything about Israel’s nuclear arsenal.

Any country trying to develop nuclear weapons will face opposition, if not from the “big five” nuclear powers then from their local proxies. If any country ignored this and pressed ahead with its programme, then it too would see its facilities attacked and scientists murdered, as Iran has.

We should not forget that Iran and Israel were both alleged to be involved in the assassination of Iraqi scientists who worked on chemical and nuclear weapons and missile development after the collapse of Saddam Hussein’s regime. Any Iraqi renaissance not under their control was seen as a threat. In other words, their interests coincided in the elimination of Iraqi scientists.

Turkey dared to buy the Russian S-400 missile defence system and faces threats and sanctions. What if it tries to build a nuclear bomb? Turkey and other countries such as Brazil are thinking about nuclear development, and know what they will face if they go ahead.

Despite the competition between major world and regional powers, they all meet and agree when it suits them to collaborate against third parties. It is likely, therefore, that even though the Israelis are blamed for Fakhrizadeh’s murder, it went ahead with significant logistical assistance from one or more of Iran’s neighbours and the major powers, all of whom share the goal of preventing Tehran from developing nuclear weapons. The same scenario will be repeated with Saudi Arabia or Turkey if either approaches the red lines drawn in the nuclear sand.

Even superficial research will reveal that a number of scientists in places such as Egypt, Algeria and Morocco, have died in mysterious circumstances. It is no coincidence that they studied nuclear science in Western universities before returning to their home countries to serve their own national projects.

Nuclear weapons must, it seems, remain the prerogative of the original nuclear powers; Pakistan and India are the uninvited guests in this regard, and Israel is the regional proxy about which nothing is ever said or done. This explains the silence whenever nuclear scientists are murdered.

The views expressed in this article belong to the author and do not necessarily reflect the editorial policy of Middle East Monitor.