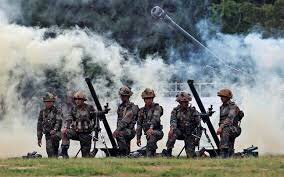 ISLAMABAD (AP) — Pakistan’s foreign minister has accused neighboring India of planning a “surgical strike” against his Islamic nation. The minister spoke during a televised news conference in the United Arab Emirates on Friday. He did not offer evidence to support his claim but added that Pakistan is fully prepared to respond to any such attack from India, which he said could endanger peace in the region. Qureshi is currently on a two-day visit for talks with senior UAE government officials. Nuclear-armed rivals Pakistan and India often accuse one another of planning attacks and have fought three wars since gaining independence from Britain.