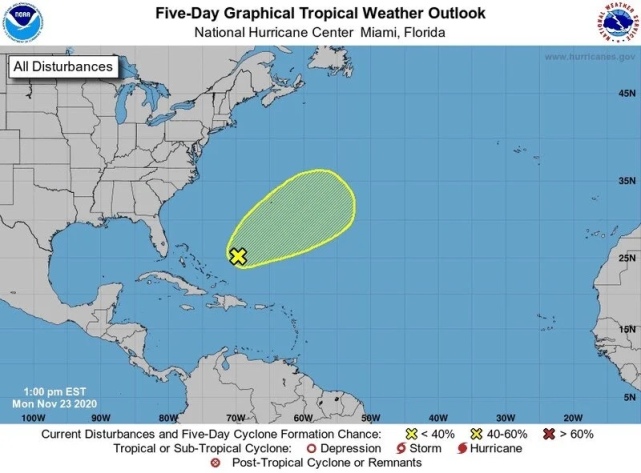 The National Hurricane Center isn’t taking it easy just because the end of the 2020 Atlantic Hurricane Season is around the corner as another tropical system emerged just east of Florida and has low odds of developing.

A broad area of low pressure is about a hundred miles northeast of the Bahamas and is shedding off disorganized showers to the northeast and east of its center, the NHC said in its 1 p.m. update.

The system has a 10% chance of becoming a tropical depression or a tropical storm in the next two days, and a 20% chance of doing so in the next five days. The low’s odds remain minimum due to strong upper-level winds limiting development of the system Monday.

The low is later expected to merge with a cold front on Tuesday. However, the low will have another opportunity to gain subtropical characteristics if it can separate from the front while slowly moving over the central Atlantic.

If the system does become a tropical storm it will become the the 31st named storm of the year and receive the Greek letter Kappa as its name.

The final day of the Atlantic hurricane season is next Monday, Nov. 30.