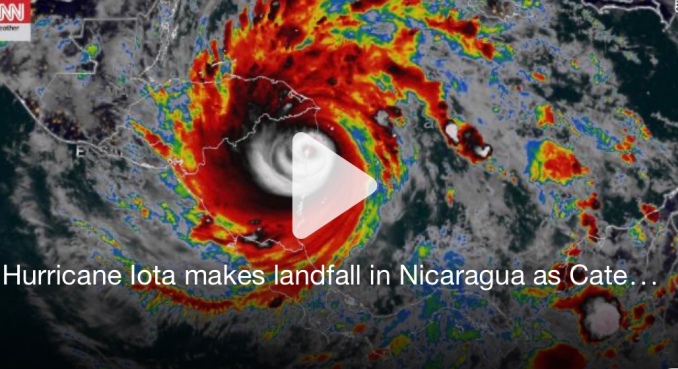 The storm is barreling across parts of Central America that are still reeling from Hurricane Eta’s impact earlier this month.

Hurricane Iota is expected to weaken to a tropical storm by Tuesday afternoon, the national hurricane center said.

Iota weakens, but risk of landslides and flooding remains high.

The hurricane is barreling across parts of Central America that are still reeling from Hurricane Eta’s impact earlier this month.

Stretches of Central America braced for heavy rain, strong winds and flooding on Tuesday morning as Hurricane Iota bore down on the region, the second hurricane to strike the area in less than two weeks.

Even as Iota weakened after making landfall overnight, the National Hurricane Center warned that it could have an outsized impact as it batters areas still recovering from Hurricane Eta this month, including portions of Honduras, Nicaragua and Guatemala.

There could be “life-threatening storm surge, catastrophic winds, flash flooding and landslides” across parts of Central America, the center warned.

Iota, which became a hurricane on Sunday, is expected to produce up to 30 inches of rain as it moves further inland across northern Nicaragua and into southern Honduras overnight into Wednesday. The storm is forecast to dissipate over Central America early Wednesday.

The threat of flooding and landslides loomed over the region as Colombia reported the storm’s first casualty on the island of Providencia, where Hurricane Iota struck as a catastrophic Category 5 overnight before weakening as it approached Nicaragua.

Iota made landfall in northeastern Nicaragua at 10:40 p.m. Eastern time on Monday as a Category 4 storm, with wind speeds up to about 155 miles per hour, according to the hurricane center. With waters rising in the northeastern Nicaraguan city of Puerto Cabezas, hundreds of families evacuated from coastal communities as the storm ripped roofs from homes and hotels.

By Tuesday morning, Iota’s maximum wind speed had decreased to 75 miles an hour and the storm had weakened to a Category 1 hurricane, although the hurricane center still warned of the storm’s danger.

No major incidents or loss of life had been reported by the Nicaraguan authorities as of early Tuesday, though infrastructure was damaged in some locations. Iota was expected to weaken to a tropical storm by Tuesday afternoon.

Aid workers struggled to reach communities that were cut off by washed-out bridges, downed trees and flooded roads left by Hurricane Eta, which made landfall this month about 15 miles from where Iota struck.

Iota was expected to move inland across Nicaragua during the morning and across southern Honduras by the evening. On Tuesday morning, the storm’s eye was about 135 miles east of Tegucigalpa, Honduras.

Philip Klotzbach, a research scientist at Colorado State University, said on Twitter that Iota was the strongest November hurricane on record to make landfall in Nicaragua.

Even before Iota made landfall, its winds blew the roof off a makeshift hospital in Puerto Cabezas that had been set up to treat people affected by Hurricane Eta.

Dozens of Indigenous communities were evacuated over the weekend in Nicaragua and Honduras, where the military shared pictures on Twitter of soldiers helping people out of stilted wooden homes and carrying them to safety. One soldier stood in knee-deep water, holding a resident’s pink backpack in the same arm as his service weapon.

Villagers repairing the roof of a house damaged by Hurricane Iota on Monday in San Andrés Island, Colombia.Getty Images

Colombia reported the first casualty of the hurricane on Tuesday morning, with authorities saying that at least one person died and one went missing overnight when the hurricane struck the island of Providencia as a catastrophic Category 5.

President Iván Duque of Colombia said the island had sustained severe material damage that affected 98 percent of its infrastructure. Mr. Duque arrived at the nearby island of San Andrés on Tuesday morning after flying over Providencia to assess the damage.

“Today Colombia is united to address this calamity,” Mr. Duque said at a news conference in Cartagena on Monday night. “Never in the history of our country have we faced a Category 5 hurricane.”

Mr. Duque also said ships from the Colombian navy were anchored off the coast of Providencia and waiting for weather conditions to improve to deliver aid to the island.

Mr. Duque said that the mayor of Providencia was working to clear debris from the runway of the island’s airport.

On Monday. Mr. Duque said that communication with Providencia had been “very bad” because of failures in the telecommunications network, and that the Colombian military was among the agencies helping with the relief effort.

In Nicaragua, relief that the hurricane weakened gives way to sorrow.

When Nicaragua awoke on Tuesday after a night of relentless winds and heavy rains, much of the nation clung to a small victory: Hurricane Iota had not yet claimed any lives, the authorities said. The storm, once a catastrophic Category 5, had weakened to a less dangerous Category 1.

But in a poor nation battered by two hurricanes in two weeks, the storm’s impact was still severe. As Iota slammed into Nicaragua’s coast late on Monday, its winds flattened palm trees, ripped off roofs, flooded buildings and downed electricity poles. Heavy flooding inundated roads and homes in the city of Rivas, near the border with Costa Rica, after three rivers overflowed, according to reports on local news and social media.

About 40,000 people were evacuated into shelters, the government said. Residents in the port city of Puerto Cabezas, which bore the brunt of the hurricane’s arrival, spent the night in terror, crammed with their extended families into homes and shelters.

Daisy George West, 61, took shelter with her husband, two siblings and 94-year-old father in the same room in the middle of her house where the family had weathered Hurricane Eta two weeks earlier.

“It’s destroying everything,” she said. “We’re asking the Lord for mercy — mercy, that’s all we have left.”

Dozens of patients in a makeshift hospital set up in Puerto Cabezas for people affected by Hurricane Eta had been evacuated overnight, including three intensive-care patients and three women in labor, Vice President Rosario Murillo said.

Yader Tejada, a 24-year-old student in Puerto Cabezas, took shelter with his family and said the storm had felt like “a nightmare from which I can’t escape.” The hurricane took off part of their roof, which, like most of the homes in the area, is made of flimsy corrugated metal sheets.

“The gusts are like whip lashes, the zinc sheets don’t stop ringing, the trees hit the walls,” Mr. Tejada said. “We haven’t been able to sleep.”

Several of his family members’ homes were destroyed by the storm. “It’s an awful, sad and very painful experience,” he said. “I feel tired, scared, but I’m waiting for this to end soon.”

The storm is hitting a region still reeling from Hurricane Eta.

Forecasters have warned that Hurricane Iota could compound the destruction caused by Hurricane Eta, which killed at least 140 people throughout Central America after making landfall as a Category 4 storm in Nicaragua.

In Puerto Cabezas, a Nicaraguan city where houses are cobbled together by wood, nails and zinc sheets, families have been sleeping amid the rubble left from the earlier storm. As waters rose on Monday evening, hundreds of families were evacuated. On the eastern side of the city, high winds blew the roofs off some structures.

One resident, Maria Williams, 64, said that after Eta reduced her modest home to rubble, her children improvised a shelter in the same spot. But it was practically on the beach and directly in Hurricane Iota’s line of fire. So she evacuated again, walking through debris left by the last storm to reach her sister’s home.

“This Hurricane Iota is a monster,” Ms. Williams said. “I no longer think I can survive if I stay in this house. I am afraid for myself and my grandchildren.”

Another resident, Rodolfo Altunes, said that he had planned to stay put while Iota hit, but that he and his wife had decided on Monday night to evacuate, with their children in tow, because the wind and storm surges were so powerful.

Two hours after leaving, he learned that his home had been destroyed.

The storm complicates efforts to combat the coronavirus.

The responses to Hurricane Iota, and Hurricane Eta before it, have been complicated by the coronavirus pandemic as people fleeing unsafe conditions made their way into crowded shelters where the disease can easily spread.

While outbreaks in Nicaragua, Guatemala and Honduras — the countries expected to be the hardest hit by the storm — have been smaller than those elsewhere in the region, the hurricane could lead to an uptick in transmission. Natural disasters, paired with the ongoing pandemic response, have proved challenging elsewhere this year, and the impact could be more severe in underserved rural communities.

Sofía Letona, the director of Antigua to the Rescue, an aid group in Guatemala that has distributed food and medicine to hundreds of people displaced by Eta, said that her group had set up makeshift clinics in remote areas. But aid workers found widespread illness among those who had fled their homes, including gastritis, fungal infections and infected mosquito bites. Some said they had headaches, a cough and flulike symptoms — all possible signs of the coronavirus.

The hurricanes may intensify the spread of the virus as people crowd into shelters and interact for the first time with aid workers and others from outside their isolated villages. The government provided masks in some shelters, aid workers said, but many others offered no form of protection against the virus.

“More than a risk, it’s a certainty that there will be some kind of massive contagion in rural shelters,” Ms. Letona said.

Crossing the Ulua river to evacuate before the arrival of Hurricane Iota on Monday in Santa Barbara, Honduras.Yoseph Amaya/Getty Images

Iota is expected to produce up to 30 inches of rain in some areas of Nicaragua and Honduras through Friday, and intense rainfall could lead to significant flash flooding and mudslides in higher elevations.

As the storm moved west on Tuesday, patches of both nations’ coastlines were under tropical storm warnings.

President Juan Orlando Hernández of Honduras said on Monday that soldiers were among many personnel in the country, including firefighters and police officers, who had been activated to prepare for Iota’s arrival. He added that people in the storm’s path would receive cellphone messages advising them of risks and evacuation plans.

“The first and most important thing is to save lives,” he said.

The most active hurricane season on record is not over yet.

A view of the ocean Monday from a home along the Nicaraguan coast.Agence France-Presse — Getty Images

The 2020 Atlantic hurricane season, which is set to end on Nov. 30, has had 30 named storms, 13 of them hurricanes. And six of those hurricanes were considered “major”— Eta and Iota among them — meaning Category 3 or higher.

Meteorologists, having exhausted the 21-name list prepared for each hurricane season, turned to the Greek alphabet to name the further new systems. The last time the Greek alphabet was used was in 2005, when 28 storms were strong enough to be named.

This year, storms began two weeks before the Atlantic hurricane season officially kicked off, with the formation of Tropical Storm Albert in mid-May.

In August, midway through the season, scientists upgraded their outlook to say that 2020 would be “one of the most active seasons” and that they expected up to 25 named storms by the time it was over.

By November, even that upgraded expectation was exceeded.

Before Iota hit Nicaragua on Monday, there was Theta, the season’s 29th named storm. It broke the annual record set in 2005, the year that Hurricane Katrina hit the Gulf Coast.