US Raises Threat of Quake but Lowers Risk for TowersNew York TimesBy SAM ROBERTSJULY 17, 2014Here is another reason to buy a mega-million-dollar apartment in a Manhattan high-rise: Earthquake forecast maps for New York City that a federal agency issued on Thursday indicate “a slightly lower hazard for tall buildings than previously thought.”The agency, the United States Geodetic Survey, tempered its latest quake prediction with a big caveat.“The eastern U.S. has the potential for larger and more damaging earthquakes than considered in previous maps and assessments,” the agency said, citing the magnitude 5.8 quake that struck Virginia in 2011.Federal seismologists based their projections of a lower hazard for tall buildings — “but still a hazard nonetheless,” they cautioned — on a lower likelihood of slow shaking from an earthquake occurring near the city, the type of shaking that typically causes more damage to taller structures.“The tall buildings in Manhattan are not where you should be focusing,” said John Armbruster, a seismologist with the Lamont-Doherty Earth Observatory of Columbia University. “They resonate with long period waves. They are designed and engineered to ride out an earthquake. Where you should really be worried in New York City is the common brownstone and apartment building and buildings that are poorly maintained.”Mr. Armbruster was not involved in the federal forecast, but was an author of an earlier study that suggested that “a pattern of subtle but active faults makes the risk of earthquakes to the New York City area substantially greater than formerly believed.”He noted that barely a day goes by without a New York City building’s being declared unsafe, without an earthquake. “If you had 30, 40, 50 at one time, responders would be overloaded,” he said.The city does have an earthquake building code that went into effect in 1996, and that applies primarily to new construction.A well-maintained building would probably survive a magnitude 5 earthquake fairly well, he said. The last magnitude 5 earthquake in the city struck in 1884. Another is not necessarily inevitable; faults are more random and move more slowly than they do in, say, California. But he said the latest federal estimate was probably raised because of the magnitude of the Virginia quake.“Could there be a magnitude 6 in New York?” Mr. Armbruster said. “In Virginia, in a 300 year history, 4.8 was the biggest, and then you have a 5.8. So in New York, I wouldn’t say a 6 is impossible.”Mr. Armbruster said the Geodetic Survey forecast would not affect his daily lifestyle. “I live in a wood-frame building with a brick chimney and I’m not alarmed sitting up at night worried about it,” he said. “But society’s leaders need to take some responsibility.”

Secretary of the National Security and Defense Council (NSDC) of Ukraine Oleksiy Danilov claimed that Russia had not yet deployed nuclear weapons in the annexed Crimea, but that might happen in the near future. Danilov told about it in the comment to Krym.Realii.

“We do not have final confirmation on Russia’s potential placement of nuclear weapons in Crimea. But the fact is that this may happen in the near future, we are well aware of. It will depend on the number of factors, and if Russian see that they are losing, they will definitely return to this issue,” said the official.

As we reported earlier, according to Ukrainian Foreign Minister Dmytro Kuleba, the international Crimean platform summit on the de-occupation of the peninsula will take place in May 2021.

“This work will not stop even for a day and it will be crowned with the summit that takes place in Kyiv. I can report that this summit will take place in May 2021. We really hope that the situation with pandemic will stabilize,” he stated.

The Indian military says three of its soldiers and three suspected militants were killed in an outbreak of fighting near the Line of Control, the de facto border with Pakistan in the disputed Kashmir region.

The exchanges of fire on November 8 were the deadliest clashes in the region in several months.

Muslim-majority Pakistan and Hindu-majority India have fought two wars over control of Kashmir, which is claimed in full by both nuclear-armed countries.

Tensions have been particularly high in the region since August 2019, when India revoked the region’s limited autonomy and initiated a crackdown on militants and supporters of independence or unification with Pakistan-administered Kashmir.

New Delhi said the fighting began early on November 8 after soldiers detected “suspicious” movements in the Machil area near a military fence in a forest that marks the Line of Control.

Colonel Rajesh Kalia said one Indian border guard and one suspected militant were killed in an initial outbreak of gunfire.

Two more soldiers and two more suspected rebels were later killed after troops were rushed to the area, he said.

Reuters reported that four Indian soldiers had been killed in the incidents.

Based on reporting by AFP, Reuters, and dpa

After Eta, Theta and Iota could be next in busy 2020 hurricane season

PEMBROKE PARK, Fla. – The National Hurricane Center is tracking two more disturbances that have a chance of developing into tropical depressions or tropical storms.

Local 10′s Hurricane Specialist Bryan Norcross said that it is too early know if the system in the Atlantic is likely to develop into a named storm, while the one in the Caribbean is more uncertain.

A storm is named when winds of 40 mph are registered, according to Local 10′s hurricane specialist.

If it does happen, two more storms during the 2020 hurricane season will bring the count to an unparalleled 29th and 30th named storms of the season. The two names following Eta would be Theta and Iota.

According to the National Hurricane Center, showers and thunderstorms associated with a non-tropical, low-pressure system, located several hundred miles southwest of the Azores, continues to get better organized.

The National Hurricane Center said it expects further development, and a tropical or subtropical storm will likely form during the next day or two while the system moves eastward or east-north eastward over the northeastern Atlantic Ocean.  The NHC said the chance of the storm forming in the next two to five days is high – an 80 percent chance.

However, Norcross said the disturbance in the Atlantic does not appear that it could be a threat to the United States.

The tropical wave forecast to move over the central Caribbean Sea could form in the next couple of days.

Norcross said that one of the storms has a good chance of developing into at least a tropical depression.

“There are no computer model forecasts for the disturbance in the Caribbean that turn it north like Eta did, but it’s going to be moving slowly through the Caribbean and the slow moving systems in those waters are always something we need to keep an eye on.”

Norcross added that the various computer forecast models for the long range keep the system in the Caribbean and do not turn it north. But, if it does, that could be an Eta situation, he said.

How likely is it that we see a Theta or Iota before the end of hurricane season on Nov. 30?

“The one in the Eastern Atlantic is almost certain to get a name and there is a decent chance the system in the Caribbean will get a name, too,” Norcross said.

He did point out that just because Nov. 30 is the official end of the hurricane season does not mean we could be done with disturbances.

“Sometimes in a busy season, storms can form after the end of the November,” he said.

The naming convention has been established by the World Meteorological Organization Tropical Cyclone Programme.

The Israeli cabinet on Sunday approved the construction of a new settlement near the border with the Gaza Strip, according to Israeli Channel 12.

Ahead of the cabinet meeting, Prime Minister Benjamin Netanyahu said the government will approve the building of a new settlement near Gaza.

Israeli daily Yediot Ahronoth reported that the new settlement will house around 500 families and it will be named as “Hanun”.

The Israeli government said it will allocate one million NIS ($ 296,000) for the development of the infrastructure in the new settlement, which will be within the area of Israel’s Sdot Negev Regional Council.

There was no comment from the Palestinian authorities on the report.

The West Bank, including East Jerusalem, is regarded as occupied territory under international law, thus making all Jewish settlements there illegal.

*Ahmed Asmar contributed to this report from Ankara

Anadolu Agency website contains only a portion of the news stories offered to subscribers in the AA News Broadcasting System (HAS), and in summarized form. Please contact us for subscription options. 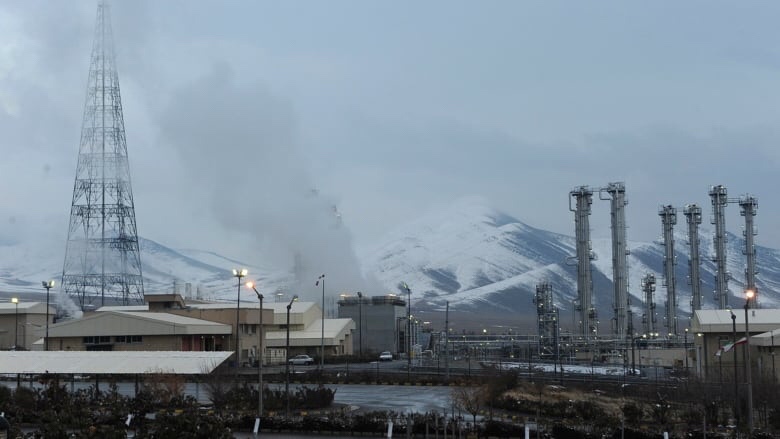 A general view of the Arak heavy-water project, 190 kilometres south of Tehran, is shown in a 2011 file photo. Heavy water is used as a moderator to slow down reactions in the core of nuclear reactors like one Iran has been developing at Arak. (Hamid Forootan/Reuters)

Iran has continued to increase its stockpiles of enriched uranium and remains in violation of its deal with world powers, the UN’s atomic watchdog said Friday.

The International Atomic Energy Agency reported the finding in a confidential document distributed to member countries and seen by The Associated Press.

Iran signed the nuclear deal in 2015 with the United States, Germany, France, Britain, China and Russia. Known as the Joint Comprehensive Plan of Action, or JCPOA, it allows Iran only to keep a stockpile of 202.8 kilograms.

U.S. President Donald Trump holds up a proclamation declaring his intention to withdraw from the JCPOA Iran nuclear agreement after signing it in the Diplomatic Room at the White House on May 8, 2018. (Jonathan Ernst/Reuters)

The IAEA reported that Iran has also been continuing to enrich uranium to a purity of 4.5 per cent, higher than the 3.67 per cent allowed under the JCPOA. It is also above the pact’s limitations on heavy water.

The nuclear deal promised Iran economic incentives in return for the curbs on its nuclear program. Since President Donald Trump pulled the U.S. out of the deal, Iran has been slowly violating the restrictions.

The ultimate goal of the JCPOA is to prevent Iran from developing a nuclear bomb — something that Tehran says it does not want to do. It has been open about the violations and continues to allow IAEA inspectors access to its facilities to monitor operations.

It is now in violation of all restrictions outlined by the JCPOA, which Tehran says it hopes will pressure the other nations involved to increase economic incentives to make up for tough sanctions imposed by Washington after the U.S. withdrawal.

Experts fear a miscalculation in dealing with the rising tensions between the United States and Iran could explode into open conflict. 1:59

Though Iran has been hard hit by the novel coronavirus pandemic, the IAEA said it has maintained its verification and monitoring activities in the country, primarily by chartering aircraft to fly inspectors to and from Iran.

It cited “exceptional co-operation” from authorities in Austria, where it is based, and Iran in facilitating the operation.

A search is underway for a missing fisherman who went overboard off the Long Island Coast.

The individual was reported wearing an orange T-shirt, jeans, and carrying a green duffle bag. He was not wearing a personal floatation device, the Coast Guard said.

Multiple assets are currently involved in the search, including: