Eta is weakening as it tracks over Central America.

The system may approach Florida with rain, wind and high surf this weekend.

Until then, life-threatening inland flooding will persist for days in Central America.

Eta is expected to have a second wind over the Caribbean Sea, and could approach South Florida this weekend after bringing flooding rainfall to Central America over the next few days.

(The red-shaded area denotes the potential path of the center of the tropical cyclone. It’s important to note that impacts (particularly heavy rain, high surf, coastal flooding, winds) with any tropical cyclone usually spread beyond its forecast path.)

Eta could eventually dissipate for a time as it tracks farther inland through Central America, but that doesn’t mean the forecast for this system comes to an end.

The remnant spin and energy from Eta are expected to emerge over the northwest Caribbean Sea on Friday. That’s when Eta could reorganize into a depression or storm, as depicted in the latest forecast above from the National Hurricane Center.

Eta will be steered northeastward initially once it moves back over the northwest Caribbean beginning late this week. That’s because Eta will be pushed in that direction by the interaction with the counterclockwise flow around an upper-level low-pressure system located in the Gulf of Mexico, as seen in the graphic below.

That takes us to what we don’t know yet about Eta’s long-term future, and that could hinge on how Eta interacts with the upper-level low.

Eta is expected to interact or even combine with the upper low by this weekend. That could allow Eta to be pulled northward to just south of or even over the southern Florida Peninsula as a tropical or subtropical storm as soon as this weekend.

Eta could then be pulled westward into the eastern Gulf of Mexico by both that same upper low diving southward in the Gulf and an upper-level high-pressure system over the eastern states. 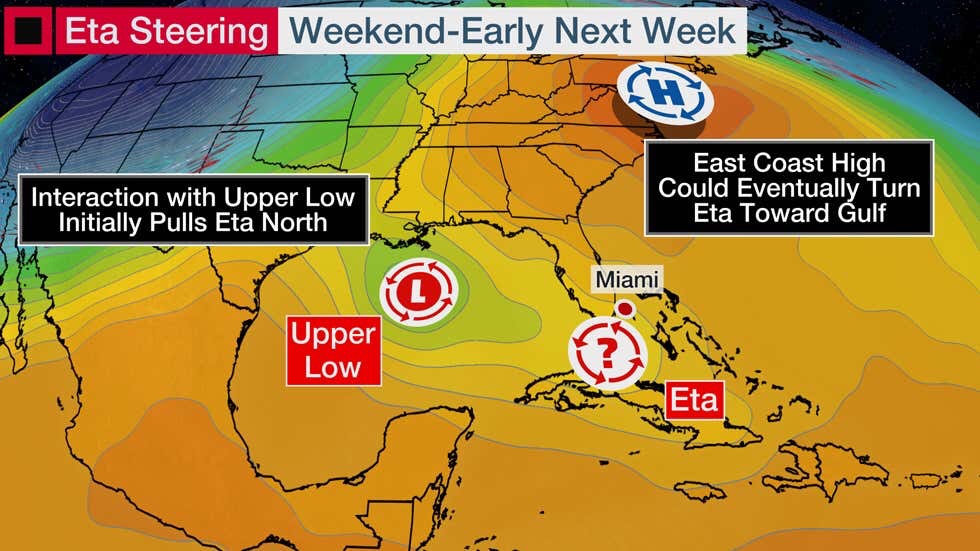 Assuming Eta does get pulled back over the eastern Gulf, instead of simply crawling north across the Florida Peninsula, it would then have to make a final landfall somewhere along Florida’s Gulf Coast later next week, as it finally accelerates ahead of an approaching frontal system.

No matter what eventually happens, parts of the Florida Peninsula could at least see some bands of heavy rain associated with Eta’s moisture as soon as this weekend that could lead to local flash flooding. 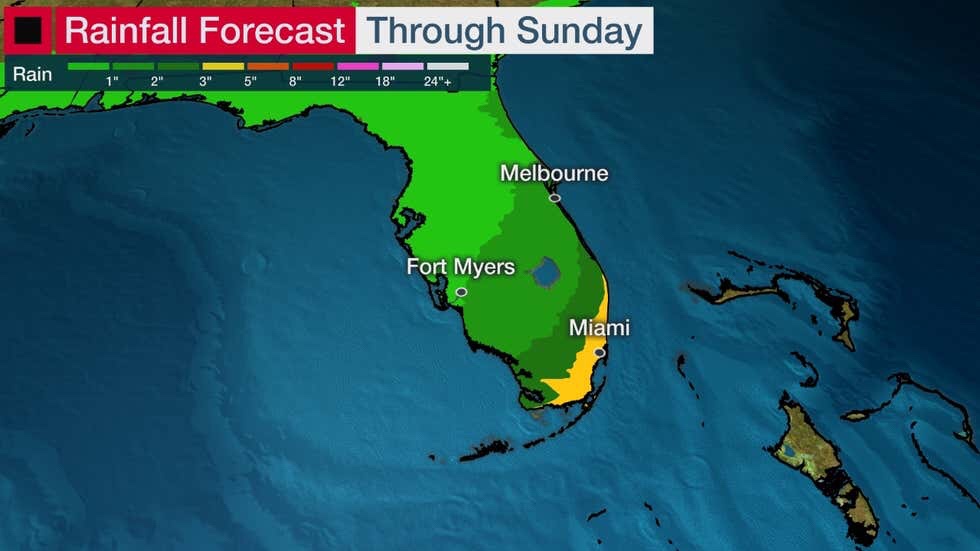 Furthermore, the gradient between high pressure near the eastern U.S. and Eta’s lower pressure will generate gusty winds blowing onshore along Florida’s East Coast into next week.

That will allow high surf and dangerous rip currents to increase from Florida’s East Coast to possibly as far north as South Carolina, topping out by early next week. Coastal flooding is likely in some of these areas, particularly at high tide.

The bottom line is that interests in the northwest Caribbean, Florida, and even parts of the U.S. Gulf Coast, should monitor the progress of Eta and its forecast.

As mentioned earlier, Eta remains a dangerous flood threat for Central America over the next few days. Here’s the latest rainfall forecast, as predicted by the National Hurricane Center.

Here are where the heaviest rainfall totals are predicted by NHC in Central America:

-15 to 30 inches of additional rainfall in portions of Honduras, Guatemala and Belize, with locally up to 40 inches in eastern Honduras

-15 to 20 inches of additional rainfall in portions of Nicaragua, El Salvador and Costa Rica, with locally up to 40 inches in eastern Nicaragua

-10 to 25 inches, with locally up to 30 inches in the Cayman Islands and western Cuba

-5 to 15 inches, with locally up to 20 inches in southeast Mexico

-3 to 5 inches of additional rainfall, with locally up to 15 inches in Jamaica 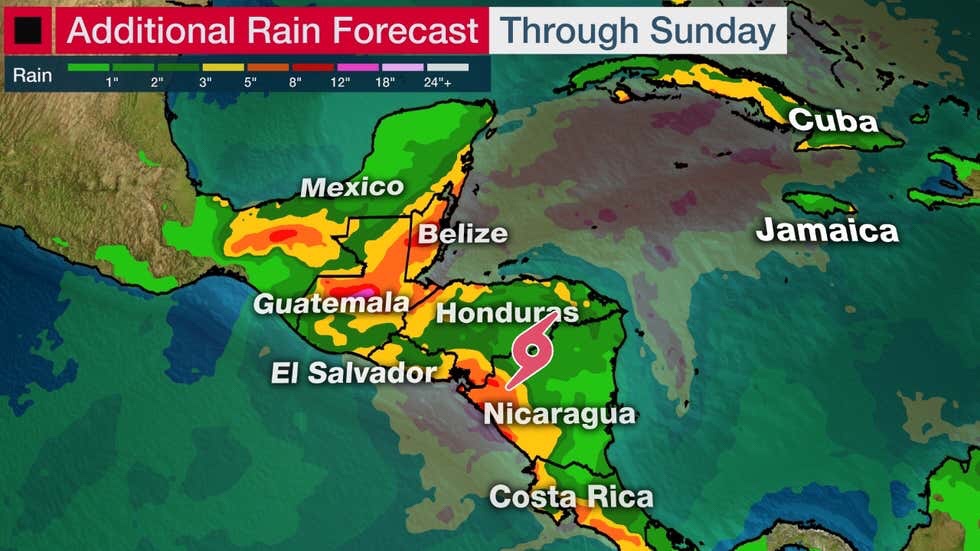 Maximum sustained winds in Eta increased from 70 mph to 150 mph in just 18 hours ending 7 p.m. EST Monday. That’s more than double the criteria for the rapid intensification of a tropical cyclone, which is a wind speed increase of 35 mph or more in 24 hours or less.

Eta was the ninth storm of the 2020 Atlantic hurricane season to undergo rapid intensification.

Eta’s central pressure plunged 82 millibars in 48 hours ending 1 a.m. ET Nov. 3, one of the largest 48-hour pressure drops on record in the Atlantic Basin, according to Sam Lillo, a NOAA researcher based in Boulder. Only hurricanes Andrew, Rita and Wilma had as large or larger pressure drops in a 48-hour period than Eta, Lillo found.

The small hurricane produced prolific lightning flashes in its eyewall Monday afternoon, one sign of its intensity.

Eta’s eye arrived along the coast of Nicaragua about 15 miles south-southwest of Puerto Cabezas, Nicaragua around 4 p.m. EST Tuesday. At that time, maximum sustained winds were estimated at 140 mph, a Category 4 hurricane on the Saffir-Simpson hurricane wind scale, according to the National Hurricane Center.

Eta was only the fifth Category 4 or stronger hurricane on record to landfall in Nicaragua, the first since Category 5 Hurricane Felix in 2007.

Winds had gusted up to 136 mph near Puerto Cabezas, Nicaragua, Tuesday afternoon.

The National Hurricane Center (NHC) forecasted a destructive storm surge inundation of 14 to 21 feet above normal tide levels near where Eta made landfall. This is roughly the magnitude of storm surge experienced during Category 5 Hurricane Felix in 2007.

Nicaragua and Honduras have seen roofs ripped off of homes, trees uprooted, bridges washed out, landslides and flooded roads.

A man standing on a bridge looks out at the Ulua River in Progreso Yoro, Honduras, Wednesday, Nov. 4, 2020. Eta weakened from the Category 4 hurricane to a tropical storm after lashing the Caribbean coast for much of Tuesday, its floodwaters isolating already remote communities and setting off deadly landslides. (AP Photo/Delmer Martinez)

Israel strikes back outside the Temple Walls: Revelation 11

Tens of thousands of Antichrist supporters rally in Iraq

The Nuclear Storm is Coming: Revelation 16