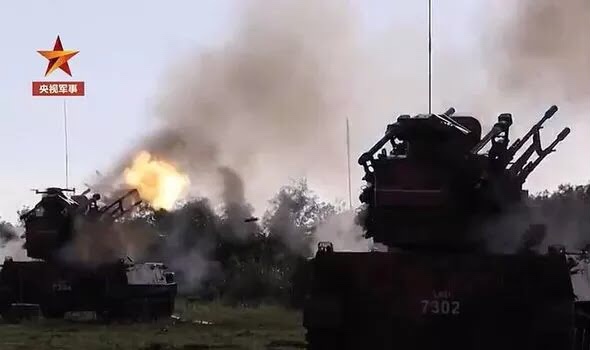 WW3: China unveils ‘net of fire’ weapon as they hold surprise military crisis talk with US

China’s People’s Liberation Army (PLA) has released footage of a recently conducted live-fire drill. The exercise, which was to practice operating a new anti-air weaponry system in Guangdong, has sparked World War 3 fears. A video posted by Chinese state-affiliated media company, Global Times, demonstrated the capabilities of the eastern state amid reports of military talks with the US for crisis communication.

They can be seen firing at the same time in the video.

The artillery shoots up to 10 bullets a second.

This creates a “net” of fire for a split second.

The PLA’s 75th Group Army were responsible for holding the live-fire drill in Guangdong.

Group armies are comparable to a US division rather than a corps.

They are made up of various modern units such as infantry, artillery, armoured signal, antichemical warfare, engineer, air defence, air, and electronic countermeasure units.

China and the US held a video conference meeting about military crisis communication this week, according to Chinese defence ministry spokesman Wu Qian.

This comes after US Defence Secretary Mark Esper was forced to deny reports that America was studying a plan to attack the South China Sea using a drone in the event that the presidential election was not looking favourable for Donald Trump.

Tensions between the two militaries have been high regarding the South China Sea this year.

Mr Esper said the United States “has no intention of creating a military crisis with the Chinese”.

Mr Wu added: “We urge the U.S. to walk the talk, keep its promise, and take measures to prevent provoking China military in the air and sea.”

The Defence Secretary has been touring Asia with Secretary of State Mike Pompeo to urge countries to cooperate with the US to confront the security threats posed by China.

China has criticised the fellow superpower for having a Cold War mentality and zero-sum mindset.

A Pentagon statement about the meeting read: “The two sides agreed on the importance of establishing mechanisms for timely communication during a crisis, as well as the need to maintain regular communication channels to prevent crisis and conduct post-crisis assessment.”