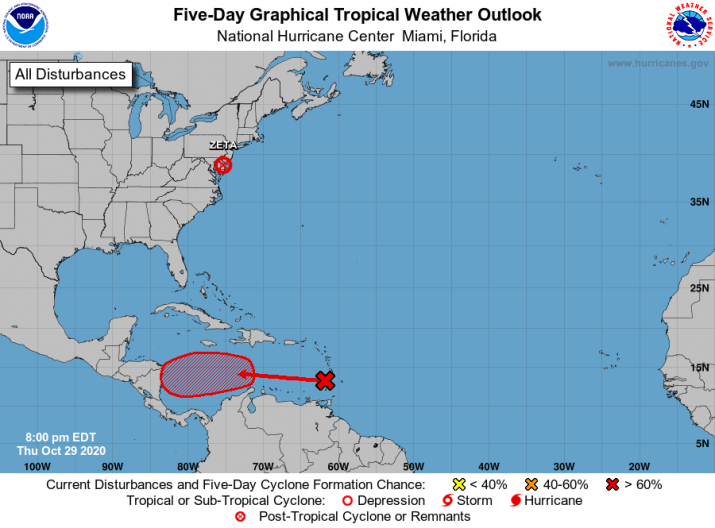 Disturbance near the Lesser Antilles

The new area of disturbed weather was still moving from the Atlantic Ocean into the Caribbean Sea and now had a 70% chance of forming into a tropical depression over the next five days.

Forecasters said the system is expected to become a depression by the time it reaches the western Caribbean.

The shaded area on the map shows where a storm could develop and is not a track. The National Hurricane Center usually releases a track when a depression forms or is about to form.

It is unknown at this time whether this tropical wave will move toward the Gulf Coast.

The hurricane that hit southeast Louisiana on Wednesday evening was now a post-tropical cyclone over the Atlantic Ocean, just off the coast of New Jersey.

Forecasters said the storm would become by a frontal system over the western Atlantic by Friday night.

Even now that Zeta no longer poses a threat, hundreds of thousands of residences and businesses were still without power in metro New Orleans while city and parish agencies worked to clean debris off the streets.

Utility company officials said they hoped to have power restored to most customers by the weekend.

Zeta was the fifth storm to hit Louisiana’s coast in 2020, the most of any year in recorded history.

What else to know

The system currently in the Atlantic Ocean will only be named once and if it progresses into a tropical storm.

Because forecasters have already run through the alphabet, the storm could be named from the Greek alphabet. The next name available is Eta.

The Atlantic hurricane season ends Nov. 30, but storms can form any time.

The Iranian horn continues to nuke up: Daniel 8