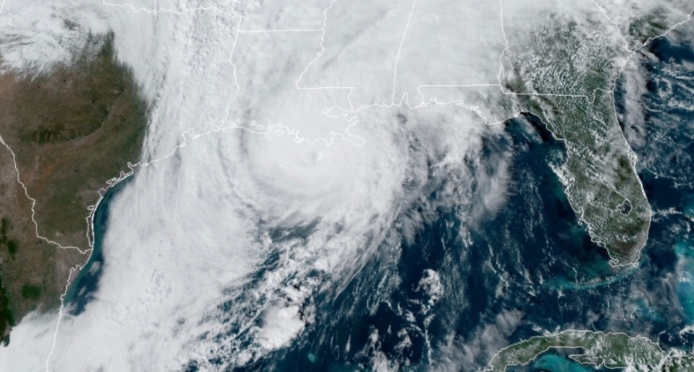 Hurricane Zeta strengthened to a strong Category 2 storm and was making landfall near the Lafourche/Terrebonne parish line at about 4 p.m.

The National Weather Service said Zeta was coming ashore near Cocodrie with sustained winds of 110 mph.

Zeta currently has maximum sustained winds of 110 mph. It almost reached Category 3 strength as windspeed closed in on the 111 mph minimum for a major storm, according to the Saffir-Simpson Hurricane Wind Scale.

The system is moving north-northeast at 22 mph.

Senior Hurricane Specialist Richard Pasch in a 4 p.m. forecast discussion message that it’s possible that the storm’s interaction with an upper-level trough of low pressure several hundred miles west-northwest of Zeta is partly responsible for its increase in intensity.

“Somewhat surprisingly, Zeta has rapidly intensified this afternoon,” Pasch said. “Although the hurricane has been moving over marginally warm sea surface temperatures and relatively low heat content waters, it has intensified from 80 knots to 95 knots in about 6 hours.”

National Weather Service meteorologist Lauren Nash said Zeta “will have a little bit of everything,” including storm surge on the coast, high winds, up to 4 inches of rain and possible tornadoes.

She said the worst of the hurricane will be wind. Its quick pace means rain won’t stick around long enough to cause widespread flooding.

The forecast for lighter rain is welcome news for New Orleans residents, where one of the city’s four turbines that power its drainage system’s pumps is out of commission.

In addition to its speed and intensity, Zeta has had a stable path, with no real changes since Tuesday morning.

“It really hasn’t shifted its track, and it looks like the eye will still pass just east of metro New Orleans,” Nash said.

Mayor LaToya Cantrell and other metro-area leaders warned residents to be indoors by 2 p.m. and resist the urge head out to see and feel the increasing winds.

“It’s coming fast, and it’s coming strong,” Cantrell said. “This is not a drill.

Gov. John Bel Edwards said the speed of the storm, which was moving 17 mph as it approached land and was expected to move even faster over land, will work in Louisiana’s favor.

“It will get in and out of the area relatively quickly,” he said.

Edwards said about 1,500 members of the Louisiana National Guard are activated and ready to offer assistance.