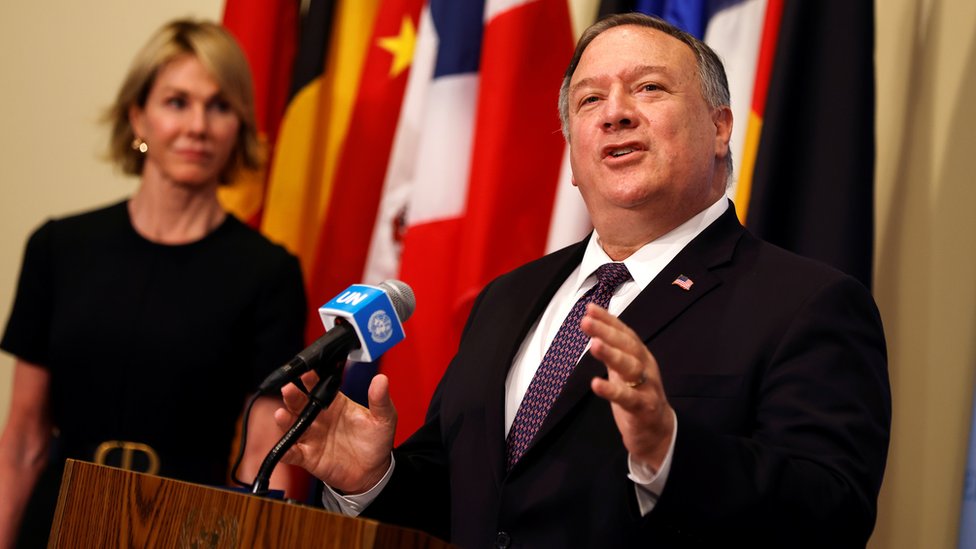 UNITED NATIONS — The United States is urging countries that have ratified a U.N. treaty to ban nuclear weapons to withdraw their support as the pact nears the 50 ratifications needed to trigger its entry into force, which supporters say could happen this week.

The U.S. letter to signatories, obtained by the Associated Press, says the five original nuclear powers — the U.S., Russia, China, Britain and France — and America’s NATO allies “stand unified in our opposition to the potential repercussions” of the treaty.

It says the treaty “turns back the clock on verification and disarmament and is dangerous” to the half-century-old Nuclear Nonproliferation Treaty, considered the cornerstone of global nonproliferation efforts.

“Although we recognize your sovereign right to ratify or accede to the Treaty on the Prohibition of Nuclear Weapons (TPNW), we believe that you have made a strategic error and should withdraw your instrument of ratification or accession,” the letter says.

The treaty requires that all ratifying countries “never under any circumstances … develop, test, produce, manufacture, otherwise acquire, possess or stockpile nuclear weapons or other nuclear explosive devices.” It also bans any transfer or use of nuclear weapons or nuclear explosive devices — and the threat to use such weapons — and requires parties to promote the treaty to other countries.

Beatrice Fihn, executive director of the International Campaign to Abolish Nuclear Weapons, the 2017 Nobel Peace Prize-winning coalition whose work helped spearhead the nuclear ban treaty, told The Associated Press Tuesday that several diplomatic sources confirmed that they and other states that ratified the TPNW had been sent letters by the U.S. requesting their withdrawal.

She said the “increasing nervousness, and maybe straightforward panic, with some of the nuclear-armed states and particularly the Trump administration” shows that they “really seem to understand that this is a reality: Nuclear weapons are going to be banned under international law soon.”

Fihn dismissed the nuclear powers’ claim that the treaty interferes with the Nuclear Nonproliferation Treaty as “straightforward lies, to be frank.”

The NPT sought to prevent the spread of nuclear arms beyond the five original weapons powers. It requires non-nuclear signatory nations to not pursue atomic weapons in exchange for a commitment by the five powers to move toward nuclear disarmament and to guarantee non-nuclear states’ access to peaceful nuclear technology for producing energy.

“That the Trump administration is pressuring countries to withdraw from a United Nations-backed disarmament treaty is an unprecedented action in international relations,” Fihn said. “That the U.S. goes so far as insisting countries violate their treaty obligations by not promoting the TPNW to other states shows how fearful they are of the treaty’s impact and growing support.”

The treaty was approved by the 193-member U.N. General Assembly on July 7, 2017 by a vote of 122 in favor, the Netherlands opposed, and Singapore abstaining. Among countries voting in favor was Iran. The five nuclear powers and four other countries known or believed to possess nuclear weapons — India, Pakistan, North Korea and Israel — boycotted negotiations and the vote on the treaty, along with many of their allies.

Fihn said there are about 10 countries that are trying very hard to ratify to get to 50, “and we know that there are a few governments that are working towards Friday as the date. … We’re not 100 percent it will happen, but hopefully it will.”

Fihn stressed that the entry into force of the treaty will be “a really big deal” because it will become part of international law and will be raised in discussions on disarmament, war crimes and weapons.

“And I think that over time pressure will grow on the nuclear-armed states to join the treaty,” she said.

Copyright 2020 The Associated Press. All rights reserved. This material may not be published, broadcast, rewritten or redistributed without permission.

Germany States the Obvious About the Iranian Nuclear Horn: Daniel

The wizards of Armageddon are back: Revelation 16

There Can Never Be Peace With The Iranian Horn

Violence Will Erupt If Abbas Cancels the Palestinian Elections: Revelation 11