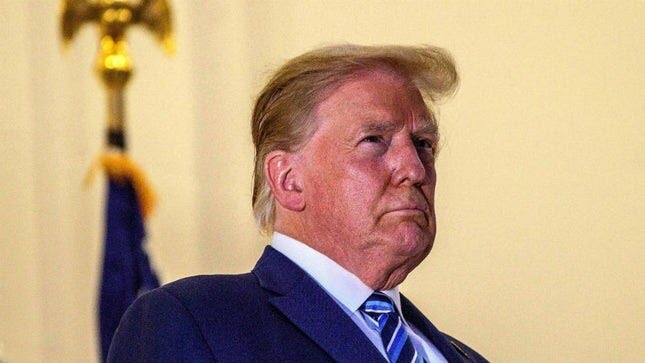 President Trump will hold a campaign rally on Monday in Florida, his first time hitting the campaign trail since testing positive for COVID-19.

The announcement comes despite the fact that the White House has yet to say whether Trump is still infectious or when he last tested negative for the highly contagious virus that has killed more than 210,000 Americans.

The president will gather in Sanford, Fla., with supporters on Monday evening, the campaign announced. Officials have declined to specify whether they would move forward with events regardless of if Trump has tested negative.

He is also slated to speak to hundreds of people on the South Lawn of the White House on Saturday.

Trump on Thursday night had floated the possibility of traveling to Florida as early as Saturday.

Public health officials advise that an individual who had the virus obtain two negative tests before interacting in public again, and Centers for Disease Control and Prevention (CDC) guidelines suggest individuals should remain isolated for 10 days after the onset of symptoms in mild cases and up to 20 days for more severe cases.

Monday would mark 11 days since Trump first tested positive for the virus, though the exact timeline of when he became infected remains fuzzy because White House officials have repeatedly refused to say when he last tested negative for COVID-19.

Aides have argued that Trump stands a good distance away from his supporters at rallies, and they take place outside to lessen the risk of transmission. Still, the decision to move forward so quickly reflects how little Trump and his campaign have changed their approach to the pandemic even after the candidate contracted the virus.

Trump admitted during a two-hour call into Rush Limbaugh’s show that he had a serious case of the virus and had not been doing well, crediting an experimental antibody treatment from Regeneron for aiding his recovery. Trump spent last weekend in the hospital and returned to the White House on Monday.

The president has not been seen in person since then, but he and his aides have attempted to project a sense of normalcy. Trump has done two phone calls with Fox networks, called into Limbaugh’s show and is slated to appear in a pre-recorded segment on Tucker Carlson’s show later Friday. He has released taped videos from the White House and worked from the Oval Office despite still being positive for the virus.

Trump’s allies are eager to see him back on the campaign trail has time runs out for him to turn the tide of the presidential race.

The president can ill afford to lose Florida and its 29 electoral votes in November if he is to have a chance at re-election, particularly given his poor showing in polls in Pennsylvania, Wisconsin, Michigan and elsewhere.

Polls released earlier this week from CNBC and Reuters each showed Biden leading Trump by 4 percentage points in the Sunshine State.