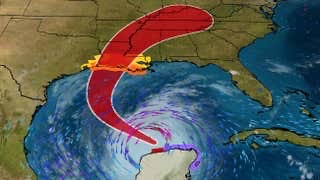 Hurricane Delta is now over the Gulf of Mexico, and expected to regain some strength.

Delta is then expected to landfall along the northern U.S. Gulf Coast Friday.

Storm surge, destructive winds and flooding rain are all expected.

This could include areas ravaged by Hurricane Laura in late August.

Hurricane Delta is now over the Gulf of Mexico off Mexico’s Yucatan Peninsula and has prompted watches along the U.S. Gulf Coast where a landfall is expected Friday.

A hurricane watch is in effect from High Island, Texas, to Grand Isle, Louisiana, and extends inland to include Lake Charles and Lafayette, Louisiana, as well as Beaumont and Port Arthur, Texas. This watch is usually issued 48 hours in advance of the onset of tropical storm conditions which make preparations difficult or dangerous.

Tropical storm watches have been posted from San Luis Pass to west of High Island, Texas, including Galveston Bay and eastern parts of the Houston metro area. This watch also extends east of Grand Isle, Louisiana, to Bay St. Louis, Mississippi, including Baton Rouge, New Orleans, Lake Pontchartrain and Lake Maurepas. This means tropical storm are possible in these areas within 48 hours.

Residents near the immediate coast and adjacent bays should have their hurricane plans ready to implement and follow any evacuation orders from local emergency managers.

(NEWS: Where Delta Evacuations Have Been Issued)

The center of Hurricane Delta is over the southern Gulf of Mexico. Microwave satellite imagery Wednesday afternoon revealed Delta’s core circulation, but the strongest thunderstorms in outer bands away from the center.

The maximum sustained winds in Delta topped out at 145 mph Tuesday, but are down to 85 mph as of Wednesday 4 p.m. CDT. The storm is moving to the northwest at 15 to 20 mph.

Conditions have improved over both Cancún and Cozumel as the strongest thunderstorms in Delta’s outer bands shifted into the northwest Yucatan Peninsula.

With a bubble of somewhat warmer Gulf of Mexico water and lower wind shear in its path, Delta is expected to regain strength through Thursday night.

Delta will also turn northward toward the U.S. Gulf Coast.

As it draws nearer to the Gulf Coast, Delta’s wind intensity could diminish somewhat due to increasingly unfavorable upper-level winds and cooler Gulf water.

Despite this weakening on approach, Delta is still forecast to be a formidably strong hurricane at landfall, most likely along the Louisiana or upper Texas coast Friday.

(MORE: Why Delta’s Weakening Before Landfall Won’t Matter Much)

Delta will then move inland over the lower Mississippi Valley, then into the Ohio Valley this weekend.

(The red-shaded area denotes the potential path of the center of the tropical cyclone. It’s important to note that impacts (particularly heavy rain, high surf, coastal flooding, winds) with any tropical cyclone usually spread beyond its forecast path.)

Swells generated by Delta should begin to arrive along the Gulf Coast, from South Texas to the Florida Panhandle and even western Florida Thursday.

These swells are likely to generate dangerous rip currents at beaches and could lead to some coastal flooding at high tide in some low-lying areas Thursday, particularly in southern Louisiana.

Delta’s storm surge will be dangerous and life-threatening regardless of any weakening in its winds up until landfall.

The highest storm surge is expected along parts of south-central Louisiana, not just near the immediate Gulf Coast, but also in bays, inlets and to some degree inland along rivers and bayous. Inundation could reach 7 to 11 feet above ground in these areas.

A dangerous storm surge is also expected in areas that were ravaged by Hurricane Laura in late August. Any potential shift westward in the forecast track could bring higher storm surge to these areas.

At least some storm surge flooding is also expected in southeast Louisiana, including along Lake Pontchartrain, and along the Mississippi and Alabama coasts, including areas affected by Hurricane Sally last month.

(From the National Hurricane Center, these are peak inundations above ground level if the storm surge from Delta arrives at high tide. Subtle changes in the track forecast may lead to changes in this surge forecast.)

The strongest winds with Delta will be near the Louisiana coast at landfall as the eyewall moves ashore. This is where structural damage, power outages and downed trees will be most widespread.

As with most hurricanes, strong winds capable of downing trees and power outages will also extend inland as Delta gains some forward speed near and after landfall, into much of Louisiana, eastern Texas, Mississippi, and southern Arkansas late Friday into Saturday.

(This is when winds of 40 mph may arrive and when it is too late to finish preparations. )

A faster forward speed than what we saw with Hurricane Sally last month will lessen Delta’s extreme rainfall potential, though heavy rainfall is still expected, particularly along and to the east of its path.

This heavy rainfall combined with storm surge could worsen and prolong flooding for a time along the northern Gulf Coast.

According to the National Hurricane Center, 4 to 8 inches, with isolated 12-inch amounts are expected with Delta near the northern Gulf Coast and lower Mississippi Valley Friday into Saturday, leading to flash flooding and at least some minor river flooding.

Some locally heavy rainfall will also spread into the Ohio Valley and Mid-Atlantic states this weekend. 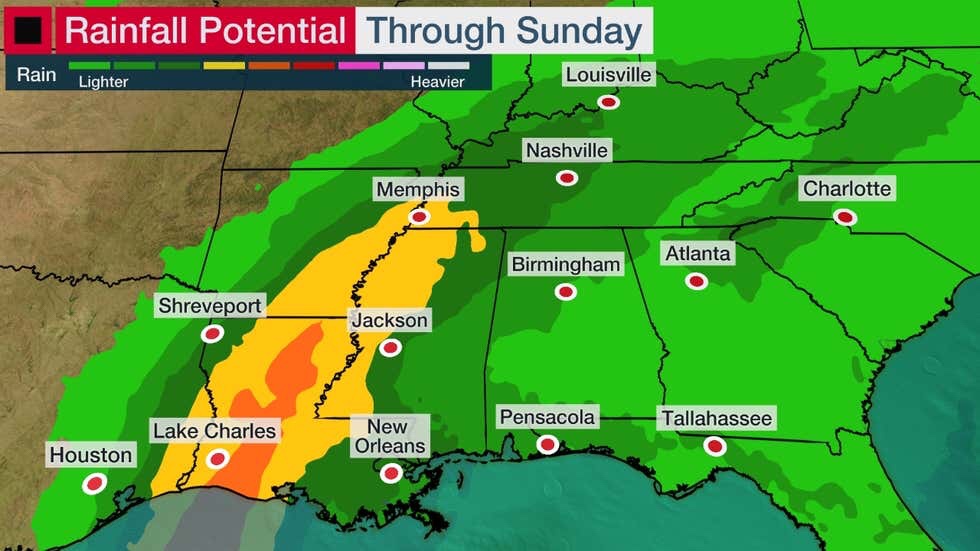 (This should be interpreted as a broad outlook of where the heaviest rain may fall.)

As with most landfalling hurricanes and tropical storms, there’s also a threat of isolated tornadoes Friday into Saturday in the lower Mississippi Valley and the Deep South.

Tropical Depression Twenty-Six formed late Sunday evening to the south of Jamaica and then strengthened into Tropical Storm Delta on Monday morning, the 25th named storm of the 2020 Atlantic hurricane season.

(MORE: Countdown to a Record Season) 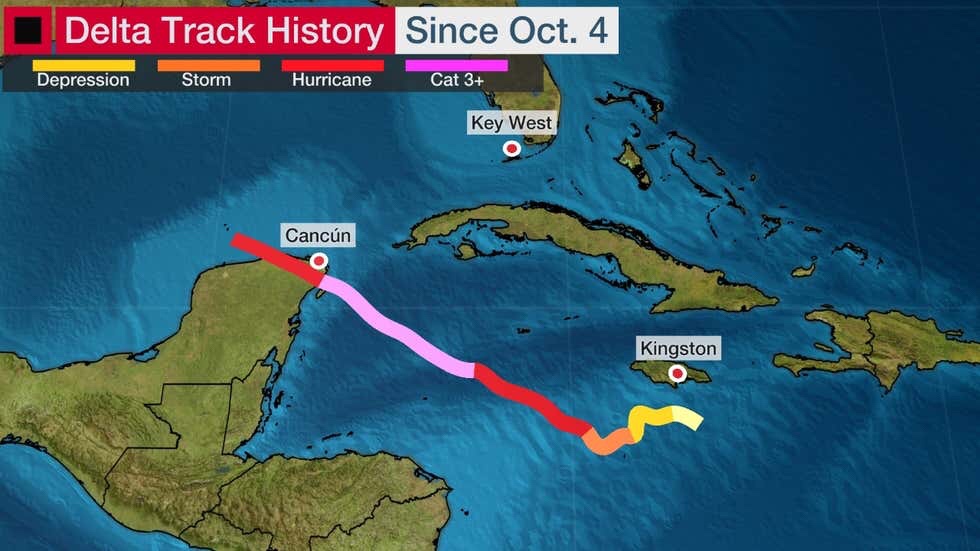 Delta became the ninth hurricane of the 2020 Atlantic hurricane season on Monday evening.

Reconnaissance aircraft measured a drop in central pressure of 18 millibars from Monday’s 2 p.m. EDT National Hurricane Center pressure estimate to when it was found to have become a hurricane about six hours later.

Winds in Delta increased by 85 mph in the 24 hours ending 11:20 a.m. EDT Tuesday. That was more than double the criteria for the rapid intensification of a tropical cyclone, which is a wind speed increase of at least 35 mph in 24 hours or less.

Delta’s rapid intensification was due to an environment of the highest ocean heat content anywhere in the tropical Atlantic basin, low wind shear and sufficiently moist air, in a region notorious for rapid intensification in October, according to Sam Lillo, a NOAA scientist based in Boulder, Colorado.

(MORE: Delta Was the Fastest on Record to Intensify From Tropical Depression to Category 4)

Delta made landfall Wednesday morning around 5:30 a.m. CDT near Puerto Morelos, Mexico, in the Yucatan Peninsula, with maximum sustained winds of 110 mph, making it a Category 2 hurricane.

A wind gust to 75 mph was measured at Puerto Morelos, 64 mph in Cozumel and 106 mph on an elevated WeatherFlow observing site near Cancún.

Delta’s weakening prior to its Yucatan landfall appeared to be due to land interaction, some modest wind shear impinging on the hurricane from the east, inhibiting its outflow aloft, and also perhaps some dry air working into the tiny circulation.

The Power of the Pakistani Nuclear Horn: Daniel 8

The Iranian Nuclear Horn is Still Vulnerable to Attack

The White Elephant in Biden’s Room is Nuclear

The IRGC Controls the Iranian Horn

So Close to the First Nuclear War: Revelation 8