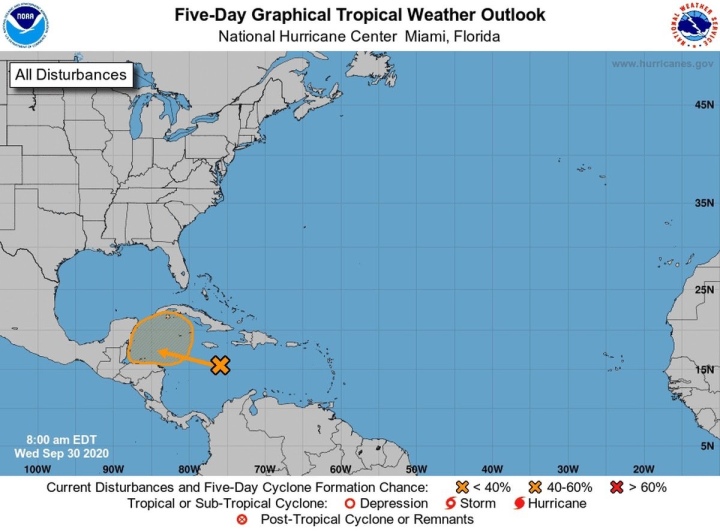 A tropical wave emerged into the Caribbean Sea on Wednesday morning and is expected to produce a broad area of pressure with increased odds of becoming Tropical Storm Gamma, according to the National Hurricane Center.

A tropical wave is expected to move west-northwest through the rest of the week and is predicted to interact with a frontal system producing a broad area of low pressure over the western Caribbean by Thursday or Friday.

The NHC forecast the emergence of the pressurized area earlier in the week and originally predicted it to have a 10% chance of developing over five days. Now with emergence of a tropical wave odds of development raised to 10% in the next 48 hours and to 60% over the next five days, the NHC 8 a.m. update.

Conditions for development are favorable for the system to become the next tropical depression or tropical storm.

If it does become a tropical storm it will be the 24th storm of the year named Gamma.

The National Oceanic and Atmospheric Administration predicted in its mid season forecast a total of 19 to 25 named storms before the end of hurricane season, Nov. 30.

Joe Mario Pedersen is a member of the Sentinel’s Breaking News team. He’s a native of Florida, the home of the Florida Man. Originally from Fort Lauderdale, Joe is a University of Central Florida graduate with a major in Radio & Television. He worked for four years at The Villages Daily Sun, including on the newsroom’s multimedia story projects.