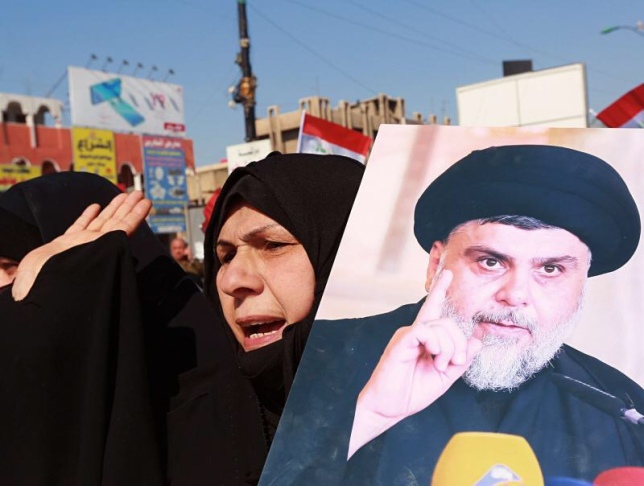 BAGHDAD – Powerful Shia cleric and leader of the Sadrist movement Muqtada al-Sadr said Wednesday that factions of the Popular Mobilisation Forces (PMF) are implicated in rocket attacks and assassinations in the country.

In a tweet late on Wednesday, Sadr said, “What some armed groups affiliated with the Hashd al-Shaabi [PMF] are doing is weakening Iraq, its people and country, and weakening these three aspects means strengthening the external forces, on top of the list is the great evil America.”

He added, “It is necessary to seek wisely and deliberately to end making Iraq an arena for the struggle of others and to strive together for the independence, sovereignty, peace, security of Iraq, or Iraq will be shifted away from our hands.”

The PMF are mostly composed of armed Shia factions that were trained to fight ISIS in 2014 and formally affiliated with the Iraqi armed forces. Some PMF factions, however, respond only to the orders of leaders close to Iran.

Sadr supports the Sairoon coalition, which is the largest coalition in parliament (54 out of 329 seats).

The Shia cleric’s message is the most prominent statement from a political leader on who is behind repeated rocket attacks since last year against the US embassy in Baghdad and military bases that host US diplomats and troops.

Sadr’s statements also implicitly accuse some PMF factions of being behind the assassination of activists who participated in protests against political elite that are accused of corruption and collaboration with foreign countries, particularly Iran.

“We, in turn, renew the demand for non-interference in Iraq’s internal affairs from all parties. We also emphasise peace in all dealings, as Iraq can no longer endure more violence, wars, clashes, political conflicts and riots,” Sadr said.

The Shia cleric expressed on September 18 his rejection of the operations targeting foreign missions in the country, following their escalation during the past weeks.

He said in a tweet at the time, “It’s not for Iraq’s interest to drag the country into a dark tunnel and into the furnace of violence.”

“It’s not for Iraq’s interest to target cultural and diplomatic headquarters, “he said, adding that “political and parliamentary means can be followed to end the occupation and prevent their interference, and those who attack the headquarters are exposing Iraq and its people to the imminent danger.”

Over the past few weeks, attacks targeting US and foreign forces of the international coalition against ISIS have escalated.

Washington accuses armed Iraqi factions linked to Iran, including Kata’ib Hezbollah, of being behind the attacks targeting its embassy and military bases, from which American soldiers are sometimes deployed in the country.

Kata’ib Hezbollah, whose leader Abu Mahdi al-Muhandis was assassinated in January by the US military while he was with Iranian Major General Qassem Soleimani near Baghdad airport, is considered one of the factions with the closest relationship with Tehran.

Iraqi political forces and activists from the protest movement accuse militias loyal to Iran of kidnapping and torturing protesters, placing them in secret prisons and shooting demonstrators.

Iraqi Prime Minister Mustafa al-Kadhimi promised to hold the killers of demonstrators accountable and made surprise visits to numerous prisons to find out whether they included detainees from the protest movement.

On July 7, the Iraqi judiciary announced the formation of an investigative body to look into assassination crimes, hours after an expert on armed groups, Hisham Hashemi, was assassinated.

Sadr is one of the fiercest opponents of the US’s military presence in Iraq, but has refused to resort to violence to drive American forces out of the country.