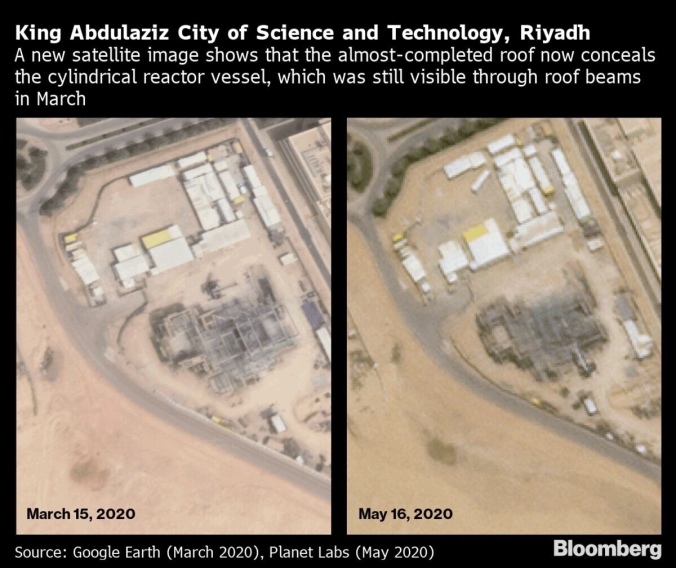 (Bloomberg) — The United Nations nuclear watchdog has been working in parallel with Chinese officials to help Saudi Arabia exploit uranium — the key ingredient for nuclear power and weapons — despite its inspectors being frozen out of the kingdom.

The International Atomic Energy Agency published a document ahead of its annual conference next week showing the Vienna-based organization assisting Saudi efforts to make nuclear fuel. An institute in Beijing affiliated with the IAEA has been prospecting for uranium in Saudi Arabia.

“It’s very important that the agency is present and is engaged with any country that wants to perform any activity related to the nuclear fuel cycle,” IAEA Director General Rafael Mariano Grossi said on Monday.

Grossi said his agency had offered only limited advice on how to make fuel from uranium, and was “in dialog” with Saudi authorities over granting inspectors access to more people, places and data so they can monitor how uranium potentially produced in the kingdom is used.

The Saudis have stepped up their pursuit of nuclear technologies in recent years, piquing the interest of companies from South Korea to Russia and the U.S. The kingdom is nearing completion of its first reactor, a low-powered research unit being built with Argentina’s state-owned INVAP SE. It has repeatedly pledged that its nuclear program is strictly for peaceful purposes, but Crown Prince Mohammed Bin Salman said the kingdom would develop a bomb if its regional rival Iran did so.

Chinese geologists have helped Saudi counterparts identify uranium deposits located in the northwestern region of the country, where the kingdom is planning the futuristic city of Neom, according to documents reviewed by Bloomberg.

Promising locations were presented to Saudi Arabia’s vice minister for mining affairs, Khalid Saleh Al-Mudaifer, at the end of last year, according to a statement by the Beijing Research Institute of Uranium Geology, or BRIUG.

BRIUG referred follow-up questions to the China National Nuclear Corp., which didn’t respond to phone calls and emails requesting comment. The geology institute operates a joint technical center and has cooperation agreements with the IAEA, according to its website.

While Saudi Arabia has been open about its ambitions to generate nuclear power, less is known about the kinds of monitoring the kingdom intends to put in place. President Donald Trump’s administration sent a letter to Saudi Arabia a year ago setting requirements to access U.S. atomic technology. The baseline for any agreement is tougher IAEA inspections that include a so-called Additional Protocol — the same monitoring standard applied in Iran and more than 130 other nations, which allows inspectors wider access to sites including uranium mines.

The kingdom is among only 31 countries worldwide that still applies an old set of IAEA regulations that don’t allow inspections. On Monday, the agency said it was beginning a new initiative to roll back those rules because they can’t provide adequate assurance that all activity is for exclusively peaceful purposes.

“I’m approaching them, telling them that in 2020 this is no longer adequate,” Grossi said. “We have to be up to a minimum standard.”

The IAEA provided financial and technical aid to develop Pakistan’s uranium mines and improve plutonium-producing reactors even after the country tested a nuclear weapon in 1998 in defiance of a non-proliferation treaty. While that aid was intended for civilian nuclear power, scientists involved in those projects said Pakistan used uranium mined with agency help for weapons.

The IAEA similarly helped North Korea develop its uranium mines before it kicked inspectors out in 2003. Syria, under investigation since 2007 for allegedly building a secret atomic-weapons reactor, used an IAEA-built lab to produce uranium.

“The Additional Protocol is the standard we all want, we all aspire to,” Grossi said. But adopting those stricter monitoring measures still isn’t a pre-requisite for countries receiving technical assistance, he said.