The system will traverse the eastern Gulf of Mexico this weekend.

Flooding rain is the biggest threat from this system from Florida to Louisiana.

Deadly storm surge is also possible in parts of Louisiana and Mississippi.

Sally is expected to become a hurricane before landfall.

Sally is the earliest “S” storm on record.

Tropical Storm Sally is expected to bring heavy rain, dangerous storm surge and gusty winds to Florida and the Gulf Coast through the weekend and into next week, likely as a hurricane.

Sally could produce the deadly duo of human-height storm surge and a foot or more of rainfall in parts of Louisiana, Mississippi and Alabama. Nearly 90% of deaths caused by hurricanes are the result of a combination of rainfall flooding, storm surge and rip currents.

A hurricane watch has been issued from southeastern Louisiana to the Alabama/Florida border, including Lake Pontchartrain, Lake Maurepas, and metropolitan New Orleans. Hurricane conditions are possible in this area by early Tuesday.

A tropical storm watch has also been expanded westward to the Alabama/Florida border and currently includes the Florida panhandle eastward to the Ochlockonee River in the Florida Big Bend, including Apalachicola and Panama City. Tropical-storm-force winds are possible there by Sunday night or Monday morning. Tropical storm watches also are in effect for portions of central Louisiana and southwestern Mississippi. 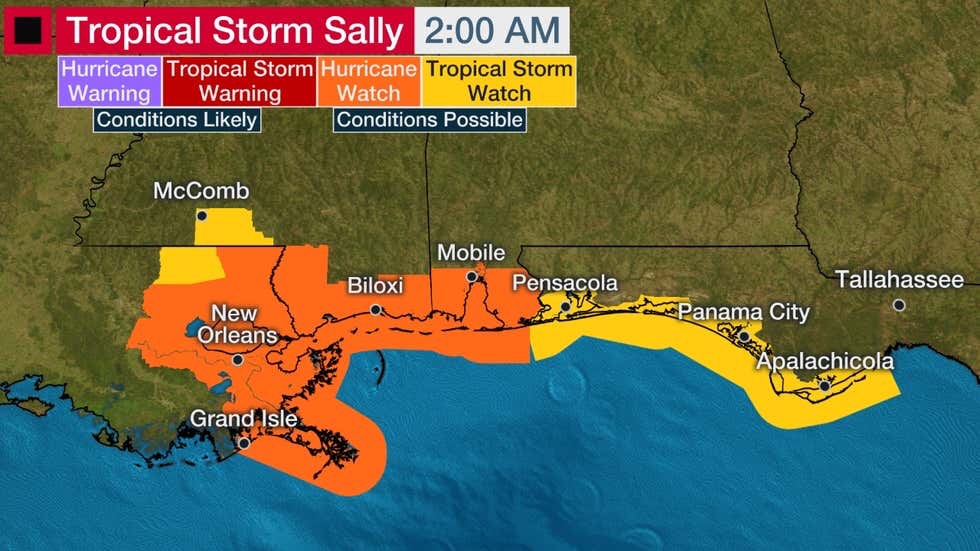 A storm surge watch is also in effect from the Mouth of the Mississippi River to the Alabama/Florida border, including Lake Pontchartrain and Mobile Bay.

Sally has been producing scattered showers and thunderstorms over southwestern Florida with bands of rain expected into the overnight hours.

Key West has received more than 9 inches of rainfall since Saturday afternoon, and flooding has been reported with numerous street closures and several stalled cars. Several inches of water were seen piled up on Duval Street in Key West Saturday evening. Key West set a daily rainfall record dating back to 1924, and recorded its second-highest hourly rainfall rate on record Saturday evening.

Marathon, Florida set a new September daily rainfall record by 5 p.m. Saturday with more than 6 inches of rainfall. The record has been in place for more than 60 years.

These bands of rain brought gusty conditions to South Florida much of Saturday. Wind gusts of 40-55 mph were recorded from Boca Raton to Miami Beach Saturday morning. 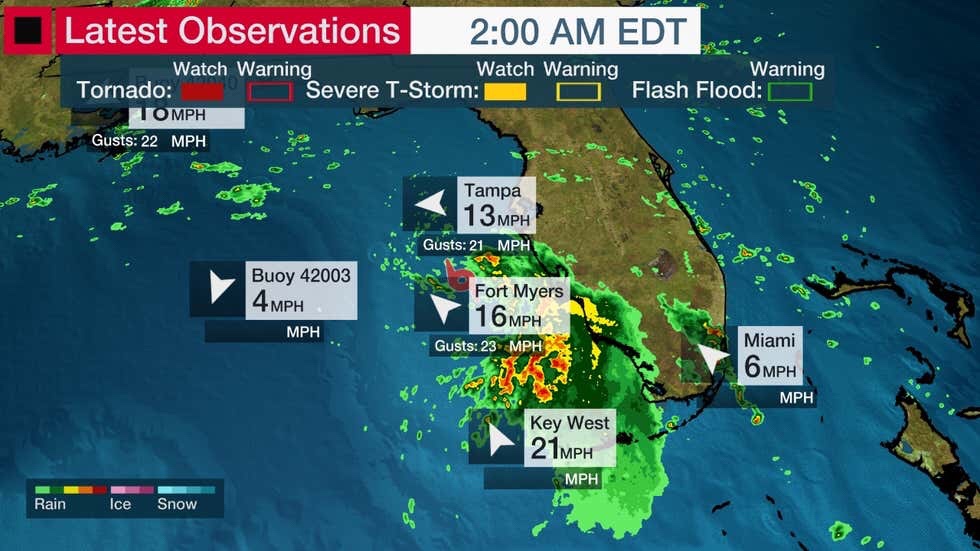 Slow organization is likely today as Sally moves away from southern Florida, but bands of rain will continue to swirl in across the state through the weekend.

A flood watch is in effect for portions of Florida, southern Alabama, southern Mississippi and southeastern Louisiana, where the system is expected to bring heavy rain and could cause flooding through the weekend. 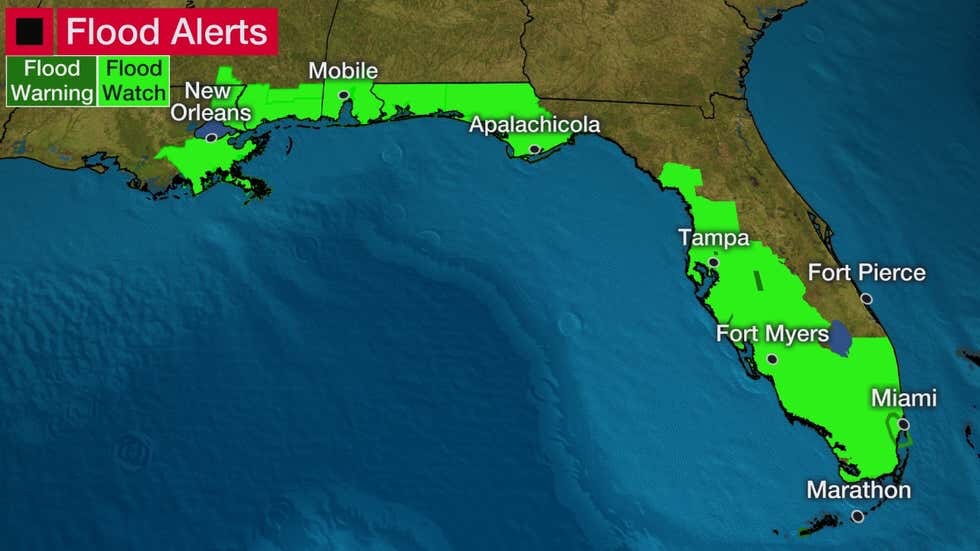 (Flood watches mean flooding could occur in that area over the next few days, while flood warnings mean that flooding is expected or ongoing. )

Rip currents are also likely along the West Coast of Florida into Sunday.

A few tornadoes or waterspouts are also possible Saturday night in the Florida Keys, in the Everglades, and Southwest Florida.

From there, Tropical Storm Sally is expected to move northwestward toward the northern Gulf Coast.

The system will arrive on the northern Gulf Coast in the first half of next week likely as a high-end tropical storm or low-end hurricane, but exactly how strong the winds will be when it arrives on the coast is uncertain. 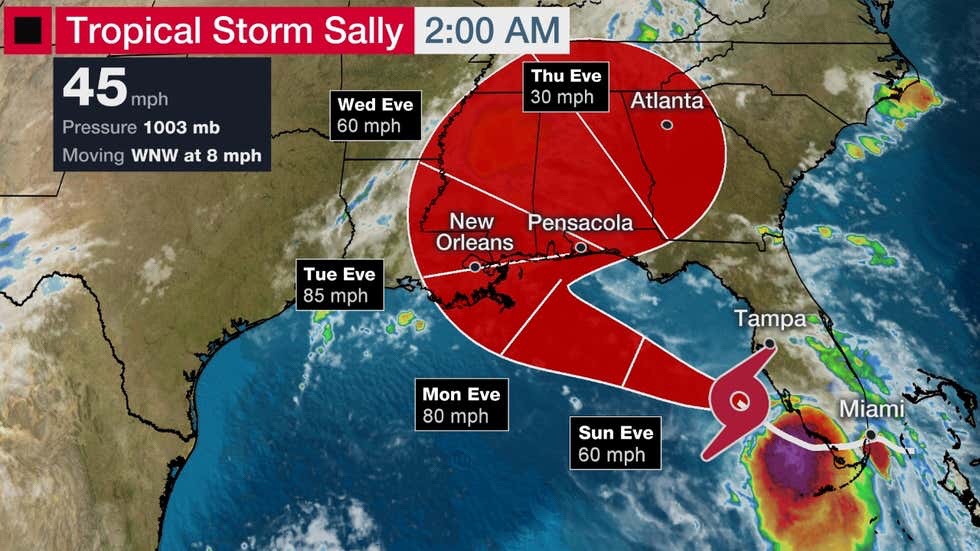 Current Info and Cone of Uncertainty

Sally will likely slow down near the coast of Louisiana or Mississippi on Monday night into Tuesday.

Sally is expected to intensify through the weekend with plentiful moisture and low wind shear but the system could fight increasing wind shear as it approaches the Gulf Coast. Sally’s slow motion could also cause the storm to dredge up colder water closer to the Gulf Coast, which could also slow the rate of intensification.

In either case, this system’s inching motion toward the coast beginning will spread rainfall, high surf and gusty winds to the shore well before landfall.

A potentially life-threatening storm surge is possible along the Gulf Coast beginning on Monday. Here’s the latest NHC forecast:

(These numbers represent how high water levels may climb near the coastline if the peak storm surge occurs at high tide. )

Sally is the earliest “S” storm to form during a season on record, beating 2005’s Stan by 3 weeks.

A second disturbance, noted as #2 in the graphic below, is producing limited thunderstorms south of the northwestern Gulf Coast. 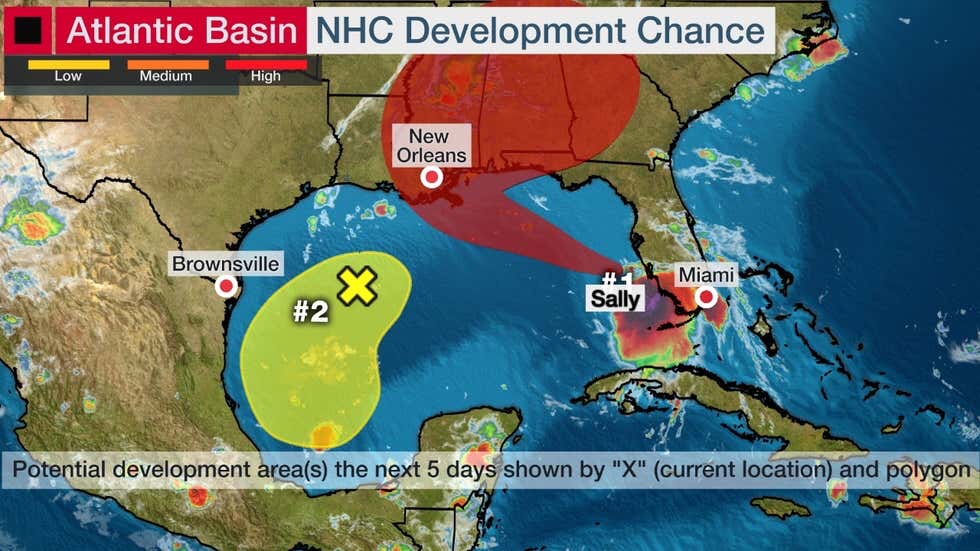 ((The potential area(s) of tropical development according to the latest National Hurricane Center outlook are shown by polygons, color-coded by the chance of development over the next five days. An “X” indicates the location of a current disturbance. The current locations of Paulette and Rene are also shown in this map. ))

It has a low chance of development but will bring rain and gusty winds to the northern and western Gulf of Mexico through the weekend and to South Texas and northern Mexico by early next week.

Most of Florida will see more than an inch of rainfall, but parts of South Florida could see totals higher than 6 inches. The Florida West Coast can expect 2-5 inches of rainfall.

Much of northern Florida, southern Alabama, southern Mississippi and southern Lousiana should expect 3-10 inches of rainfall through Thursday.

Southwestern Louisiana, which was hit hard by Hurricane Laura, may get up to two inches of rainfall depending on the track of this system.

Parts of South Texas and northern Mexico may receive up to 2 inches of rain. 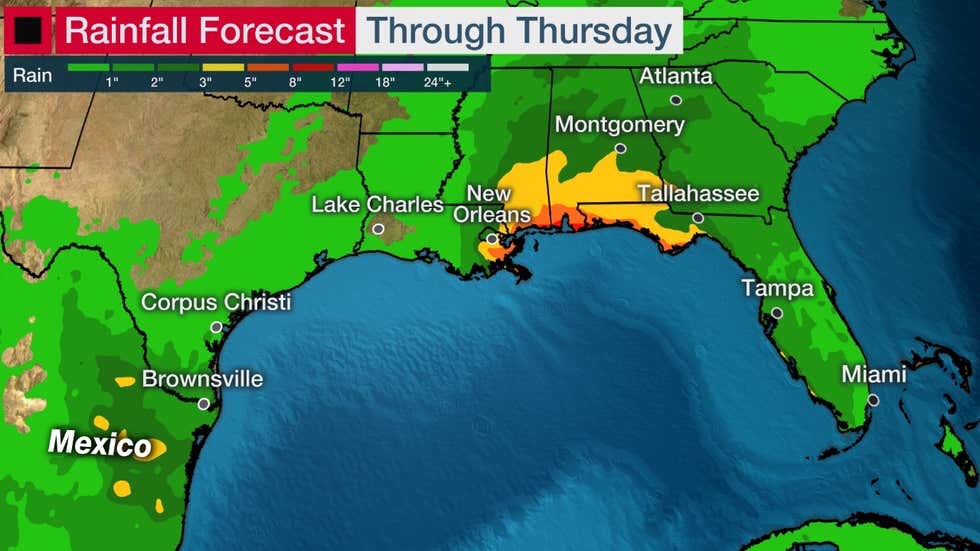 With the peak of hurricane season passing on Thursday, activity will gradually decline through the end of the season in November.

According to the latest forecasts, numerous tropical storms and hurricanes are still expected over the next few months.

Stay tuned to The Weather Channel and always be prepared, not scared for what hurricane season may bring.

Antichrist gets to work to win over voters

We are much closer to nuclear war than we like to believe: Revelation 8