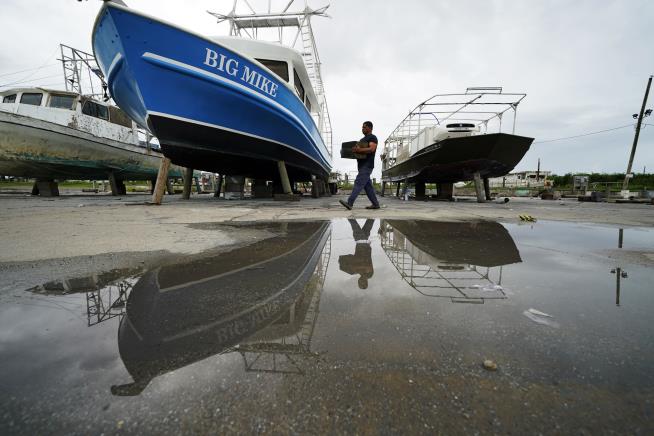 La. Governor on Storms: ‘We’ve Not Seen This Before’

Louisiana braces for 1-2 punch from Marco and Laura

(NEWSER) – After a day as a hurricane, Tropical Storm Marco brought a surge of high water to the Louisiana coast on Monday. That sets the stage for Tropical Storm Laura to enter the Gulf of Mexico and move toward the same stretch of US coast later in the week, most likely as a hurricane. People along the Gulf Coast were bracing for a history-making onslaught from the twin storms, per the AP. “What we know is there’s going to be storm surge from Marco, we know that that water is not going to recede hardly at all before Laura hits, and so we’ve not seen this before and that’s why people need to be paying particular attention,” Gov. John Bel Edwards warned Sunday. Cities from Morgan City in Louisiana to Mississippi’s Ocean Springs could see storm surges from Marco of up to 6 feet, reports NPR.

Marco had grown into a hurricane early Sunday, and while its top winds dropped to 50mph on Monday morning, the National Hurricane Center cautioned that Marco could still cause life-threatening storm surges and dangerous winds along the Gulf Coast. Marco was centered about 85 miles south-southeast of the mouth of the Mississippi River on Monday morning, moving northwest at 10mph. Forecasters said it would likely remain just off the Louisiana coast through Tuesday. Laura’s center was skirting Cuba’s southern coast on Monday after causing the deaths of at least 11 people in the Dominican Republic and Haiti. It could grow to a Category 2 hurricane, and while mass sheltering typically isn’t necessary unless it’s a Category 3, Louisiana officials were readying coronavirus protocols just in case.(Read more Gulf oil spill stories.)