An in-depth look at the end of the nuclear power industry as we know it, and what lies ahead for the communities where plants are powering down.

The communities around Indian Point are challenging Entergy’s plan to sell its nuclear power plant by raising questions about the financial health of the New Jersey decommissioning firm that wants to buy and knock it down.

The village of Buchanan, the town of Cortlandt and the Hendrick Hudson School District have asked the Nuclear Regulatory Commission to heed their concerns before deciding whether to approve Indian Point’s sale to Holtec International of Camden, N.J.

Until recently, each had remained neutral, expressing hope that Holtec’s interest would lead to a swift demolition and cleanup and allow portions of the plant’s 240 acres along the Hudson River to be opened to development sooner rather than later.

But Buchanan, Cortlandt and the school district each face a bleak economic future, with total losses pegged at $28 million, money that Entergy paid out in property taxes annually.

Buchanan is weighing cuts to services to make up for annual losses of $3.5 million, half its budget, while the school district is considering measures to close a $23 million shortfall.

In documents sent to the NRC in recent weeks, lawyers for the communities question whether Holtec will siphon off the $2.3 billion that’s been accumulating in trust funds for the day when the plants’ reactors powered down before finishing the job.

“The prospect of a funding shortfall poses radiological, environmental, and financial risks to Petitioners,” lawyers Daniel Riesel and Dane Warren write. “If, for example, the DTF (decommissioning trust fund) is insufficient to cover all of Holtec’s costs, there is no guarantee that Holtec will not simply declare bankruptcy and walk away, leaving Petitioners and their residents to pick up the tab. Moreover, the brunt of any environmental harm caused by this shortfall will be felt most acutely by Petitioners and their citizens.” 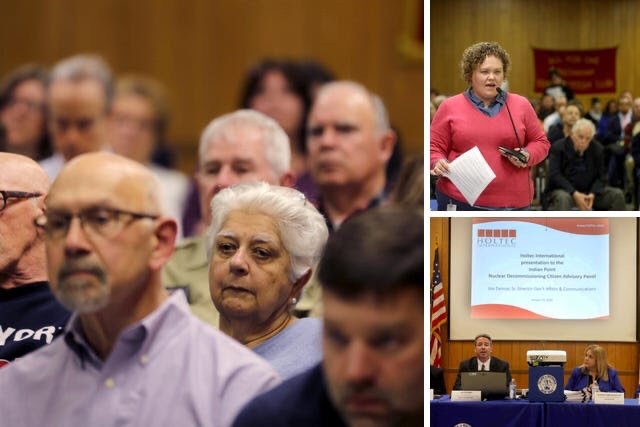 Riverkeeper and Clearwater have in recent weeks been urging supporters to oppose Holtec’s bid, leading to hundreds of form letters to the NRC from residents of Rockland and Westchester counties.

The NRC closed the public comment period on March 25 and will rule on Entergy’s license transfer bid later this year.

Entergy will shut down Unit 2 – one of two working reactors at Indian Point – at the end of the month. Unit 3 powers down next year.

Aerial shot of Indian Point power plant on the shores of the Hudson River in Buchanan.

Holtec’s lawyers have called concerns about its financial health “meritless.”

“As a general matter, the State’s arguments opine about various hypothetical scenarios and assert, without factual or quantitative support—and in some cases, with substantial facts to the contrary—that such speculative scenarios might result in costs above those estimated…,” they wrote in response to New York’s challenge.

Holtec spokesman Joseph Delmar noted the NRC has already vetted the company’s financial assurances during its review of the license transfers of nuclear power plants in New Jersey and Massachusetts.

“The Nuclear Regulatory Commission has previously determined that Holtec has the financial and technical qualifications to perform decommissioning safely, and has already approved license transactions at both Oyster Creek and Pilgrim,” Delmar said.

Central to the communities’ concerns is Holtec’s request for an NRC exemption that would allow the company to use some $632 million in trust fund money to manage the dozens of cement-and-steel canisters of spent fuel that will be left behind once Indian Point shuts down.

Holtec estimates it will cost roughly $12.5 million per year to manage the fuel, money that other nuclear power plants have recouped by suing the federal Department of Energy (DOE) for failing to fulfill a promise to create an underground repository for the nation’s nuclear waste.

The lawyers question whether Holtec will use any money they recover from the federal government to offset what they take out of the trust fund for spent fuel management.

And they raise questions about what will happen if Holtec is stuck managing the spent fuel for decades longer than expected.

The NRC is considering Holtec’s bid to build a temporary underground repository in the New Mexico desert to store nuclear waste from power plants across the U.S. But the proposal faces a number of political and environmental hurdles.

“The fundamental problem is that Holtec has refused to offer any alternative calculation for how it will meet its spent nuclear fuel obligations in the very likely event that the DOE does not begin accepting spent fuel by 2030,” the lawyers write. “It is Holtec’s burden to demonstrate its financial qualifications, and all credible evidence in the record suggests that this projection is not ‘based on plausible assumptions and forecasts.’ “

The decommissioning work would be done by a Holtec subsidiary, Comprehensive Decommissioning International, a joint venture with SNC-Lavalin.

On Tuesday, Holtec sued New Jersey’s Economic Development Authority in its dispute over $260 million in tax incentives it was promised to build a warehouse and headquarters on the Camden waterfront.