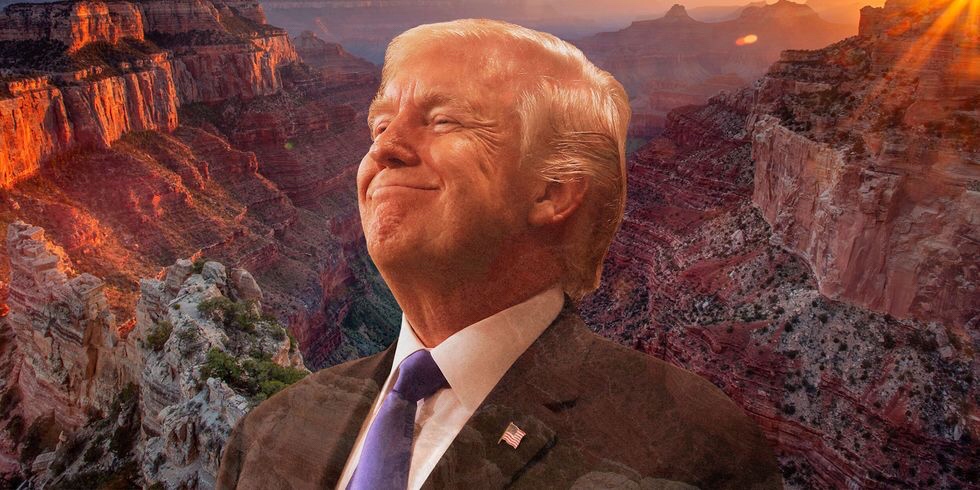 Trump Wants to Mine the Grand Canyon for Uranium

• The Trump administration supports reopening and expanding uranium mining in the U.S.

• Uranium is used in nuclear energy and weapons, including cutting-edge applications.

• The retired mines near the Grand Canyon are responsible for groundwater pollution.

In an idea that sounds like it’s from Mad Libs, President Trump has suggested he wants to mine the Grand Canyon.

The move would be part of the president’s larger stated plans to stockpile uranium, which the U.S. might need for a ramp-up of nuclear energy or weapons. Uranium is considered a “strategic material,” and while it’s not the most uncommon thing in nature, it’s held in large deposits mostly in other countries—especially Canada and China.

The uranium part is true blue, but what Trump suggested is broadly reopening existing mine sites and mining “public lands” in general. That doesn’t specifically mean the Grand Canyon, but several mines already exist adjacent to the Grand Canyon. It’s illegal to even take rocks from inside the Grand Canyon, although the National Parks service has already relented for at least one absurd purpose during Trump’s time in office.

Did You Know You Can Just … Buy Uranium?

Taking things from National Parks is generally restricted. It doesn’t take very long for millions of annual Yellowstone National Park visitors, for example, to add up to a decimated main path area. And mining protected park lands is also generally restricted along with other kinds of public lands. The question of whether or not to mine them, for uranium or for petroleum in particular, hasn’t started with Trump.

Even in a future where this mining is allowed, public lands are subject to overlapping regulations that must be untangled. And in the American West, there are also humanitarian concerns for Native American populations, both in health outcomes today and preservation of artifacts from the past.

Activists in the region say health impacts of past uranium mining near Native American lands, caused by toxic materials leeching into the ground and water, are likely responsible for the extraordinary rates of COVID-19 among the Navajo Nation.

Nuclear research is as active as ever in both the private sector and the government. Proponents of the uranium mining echo the arguments for taking oil from the American Arctic—that energy independence, whether in fossil fuels or nuclear reactors, is worthwhile in itself. But right now, the world economy has led to cutbacks even at existing uranium mines.

Even if having the uranium is strategically smart, is this the time to spend money and resources on it? And when the U.S. is immersed in one of the worst ongoing situations in the global pandemic, is it smart to add another source of potential public harm into the mix?

If Trump’s administration does go ahead with this mining plan, there are existing sites that may be reopened. That could mitigate cost, if the sites are up to date enough that they can reopen quickly and safely. Uranium is typically mined by using liquid chemical solvents to separate the ore from surrounding minerals, which is one reason why ground and groundwater pollution is such a pervasive problem.