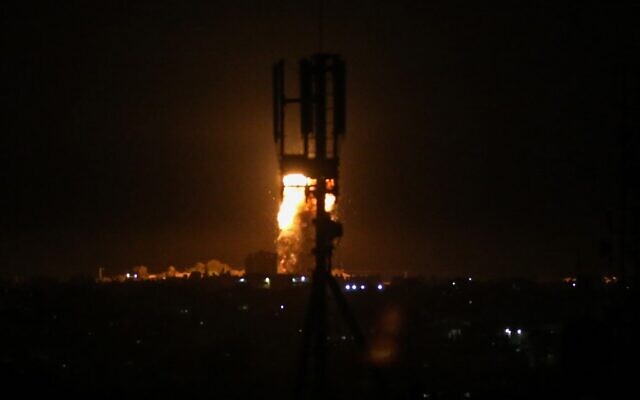 Illustrative: A ball of fire is seen following an Israeli airstrike on Rafah in the southern Gaza Strip early on August 3, 2020. (SAID KHATIB / AFP)

“The strike was carried out in response to the launching of incendiary balloons from Gazan territory into Israel over the course of the day,” the army said.

The Hamas-linked al-Resalah news outlet confirmed the report, saying the post was located near Beit Hanoun. There were no immediate reports of casualties.

The incident came amid rising tensions along the Gaza border over the past week, reportedly due to delays in the implementation of an ongoing ceasefire agreement between the Gaza-ruling Hamas terror group and the Israeli government.

On Sunday morning, gunshots were fired from the southern Gaza Strip toward civilian workers building the security barrier along the Israel-Gaza border, and then at Israeli troops who arrived at the scene, the military said. There were no injuries reported.

The initial gunshots at the workers were heard just before 11 a.m. A short time later the IDF fired a number of smoke shells in the area of Kissufim to create a smokescreen in order to evacuate the workers.

“Afterward, shots were fired at IDF troops who had been sent to the location,” the military said in a statement.

Work was halted on the security barrier in light of the attacks, the military said.

Palestinian media reported that the IDF then fired toward Hamas sites in the vicinity of Deir al-Balah. The Israeli military did not immediately confirm the reports. 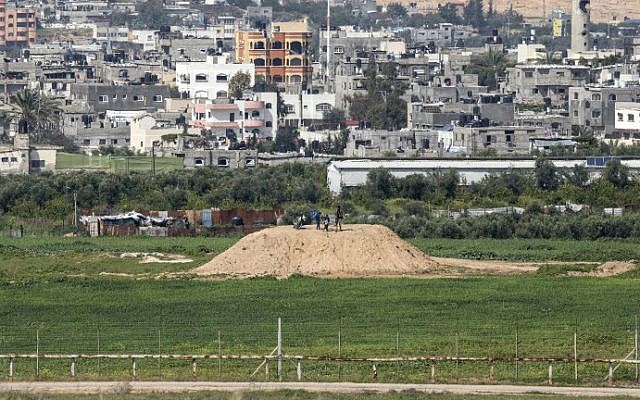 In light of the concerns of continued shooting attacks, the military also closed off access roads around the border, the Eshkol Regional Council wrote in a message to residents.

“For now and until further notice, there will be no entrance to the border zone throughout the region, including for agricultural work near the security fence,” the council said.

Recent days have seen a return of the launching of balloon-borne incendiary and explosive devices from Gaza into Israel.

On Saturday, a bunch of balloons bearing a suspected explosive device launched from the Gaza Strip into Israel was found by residents of Kibbutz Nir Oz in a nearby agricultural field, the Eshkol council said. No injuries were reported.

The council said police sappers arrived on the scene to neutralize the device, which appeared to be some sort of grenade. “Following the incident, we would like to once again emphasize: In an incident where a suspicious object has been identified, one should move away from the scene, not touch anything, and report it to security personnel immediately,” the regional council said in a statement. 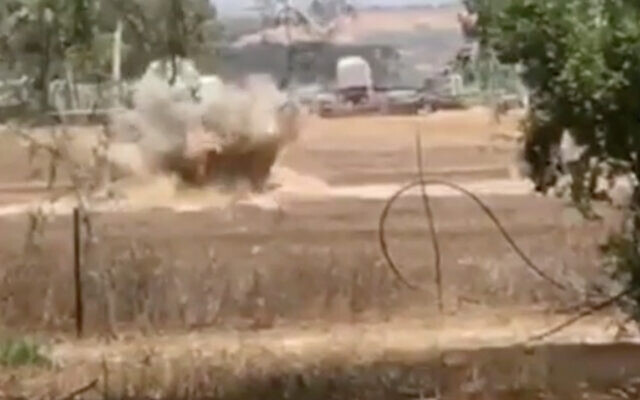 On Thursday, after a number of balloons carrying suspected explosives and incendiary devices were launched into Israel earlier in the day, Israeli aircraft bombed a Hamas site in the northern Gaza Strip, the military said.

Another balloon that carried a suspected explosive device was found near the city of Arad, some 80 kilometers (50 miles) from the coastal enclave. It was located by police and detonated in a controlled explosion, police said. The origin of the balloon was not known.

Following the strikes, Defense Minister Benny Gantz warned Gaza-based terror groups against attacking Israel. “The State of Israel will not accept any violation of its sovereignty or harm to residents of the south,” Gantz wrote on Twitter. “If the terror organizations still don’t understand, whoever tests Israel will be hit hard.”

Last Sunday evening, a Gazan terror group fired a rocket toward southern Israel, which was intercepted by the Iron Dome missile defense system, the IDF said.

In response, the IDF targeted several Hamas sites in central and southern Gaza, including a cement factory used in the construction of underground infrastructure and “underground facilities used by the Hamas terror group,” the military said.