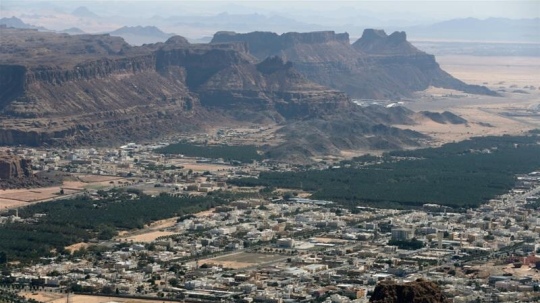 The yellowcake uranium enrichment plant was built near the remote Saudi Arabian city of Al Ula, according to Western officials quoted by the Wall Street Journal newspaper [File: Ahmed Yosri/Reuters]

The Kingdom of Saudi Arabia, with help from China, has built a facility for the extraction of uranium yellowcake, a potential precursor to fuel for a nuclear reactor, in a remote desert location near the small city of Al Ula, the Wall Street Journal newspaper reported citing Western officials with knowledge of the site.

The facility, which has not been publicly acknowledged, has raised concern among United States and allied officials that the kingdom’s nascent nuclear programme is moving ahead, and Riyadh is keeping open an option to develop nuclear weapons, according to the report.

Disclosure of the yellowcake processing facility is likely to elevate concern in the US Congress about Saudi nuclear ambitions and Crown Prince Mohammed bin Salman’s 2018 pledge that “if Iran developed a nuclear bomb, we will follow suit as soon as possible.”

The Saudi Energy Ministry “categorically” denied to the Wall Street Journal the country has built a uranium ore milling facility, but acknowledged contracting with Chinese entities for uranium exploration within Saudi Arabia.

Yellowcake is processed from naturally occurring uranium ore and can be further enriched to create fuel for nuclear power plants and, at very high levels of enrichment, nuclear weapons.

Saudi Arabia’s has signed agreements with China National Nuclear Corp and China Nuclear Engineering Group Corp following a 2012 pact between Riyadh and Beijing to cooperate on the peaceful development of nuclear energy.

The Saudis have raised concerns about a potential nuclear arms race in the Gulf region by pressing ahead with construction of a research reactor and inviting companies to bid on building two civilian nuclear power reactors without agreeing to oversight and inspection by the United Nations International Atomic Energy Agency.

A US congressional committee issued a report in May 2019 warning the administration of President Donald Trump was allowing US companies to offer Saudi Arabia nuclear technologies without first obtaining non-proliferation guarantees the know-how would not be used to eventually produce a weapon.

In February 2019, government whistle-blowers had alerted the US House of Representatives that the Trump administration was bypassing Congress to greenlight future sales of nuclear technology to Saudi Arabia, without non-proliferation safeguards, thus potentially laying the ground for a nuclear arms race in the Middle East.

Saudi production of yellowcake would be cause for alarm in the US arms control community.

The suspected acquisition of yellowcake was among the concerns raised by the US with Iraq in the run-up to the 2003 US invasion that was pre-texted on Saddam Hussein’s alleged pursuit of weapons of mass destruction.

At the time, President George W Bush accused Iraq of trying to buy yellowcake from Niger even though CIA intelligence indicated no such transaction ever took place. The discrepancy triggered a US scandal during the Bush presidency.

The winds of God’s wrath floods the East Coast: Jeremiah 23

The threat of the Pakistani nuclear horn: Revelation 8

My Neighbour, My Enemy and the First Nuclear War: Revelation 8