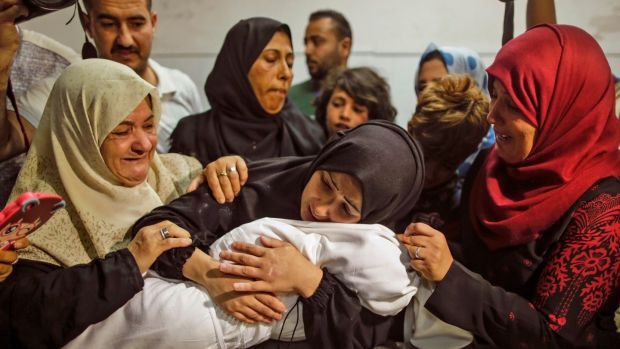 ‘Denial of healthcare outside Gaza is a death sentence for children’: Save the Children

Source Save the Children

Children in Gaza are dying as they are denied urgent healthcare outside the Strip, and more will die if they are not treated soon, Save the Children is warning.

Following the announcement of Israel’s plans to annex parts of the West Bank, the already extremely restricted access for medical patients to leave Gaza for life-saving care was further reduced, due to the end of coordination between Israeli and Palestinian officials. With Gaza’s health system on the brink of collapse after thirteen years of blockadeand the added strain of the COVID-19 pandemic, children’s lives hang in the balance.

Two infant boys have already died since coordination between Palestinian and Israeli authorities ground to a halt. Both boys, one of eight months and the other only nine days old, had heart conditions and needed surgery unavailable in Gaza, but they did not get permission to receive care in time.

There are currently more than fifty children with cancer across Gaza, fifteen of whom are in a grave condition[1] and may not survive without receiving treatment soon. Neither chemotherapy nor radiology treatments are available due to Israeli restrictions on medication entering Gaza.[2]

Before the COVID-19 pandemic and the breakdown in coordination, an average of two thousand people a month applied to receive healthcare outside Gaza, a third of whom required cancer treatment. In April, this plummeted to just 159 applications – the lowest number recorded in over a decade. Even before coordination ended, children, or their carers, were routinely denied permission to leave Gaza to receive medical treatment on security grounds.[3]

Despite the current drop in applications, a third were still rejected by Israeli authorities. In May, unsuccessful applications included a 7-year-old boy with immunodeficiency, who is at high-risk of complications from COVID-19. Twenty-eight other children did not receive permission to leave for treatment in May.

12-year-old Dina* has leukaemia and has not been able to get treatment outside Gaza since the coordination lapsed. She said: *“[My illness] has affected me a lot, to the extent that I can’t walk on my leg. To the extent that I’ve prayed for it to be amputated. [Israel] should lift the blockade so we get good schools and good hospitals, so we can have treatment and nice places to play. So we can live like other children in the world.” *

13-year-old Ahmed* was hit in the leg with shrapnel from an exploding bullet and his application to leave Gaza for surgery on his nerves was denied. He said: “One of the hardest days was when I came out of the operation and they had prepared a wheelchair. I was wondering what the chair was for. And they said, ‘you are going to sit on it and live your life in it’. I cried, from the depth of my heart… I can’t leave Gaza because they closed the checkpoints. My leg is getting worse and worse and I’m anxious about it.”

12-year-old Dina* has leukaemia and has been unable to receive treatment outside Gaza for more than two months.

Save the Children supports thirty children who urgently require medical treatment outside Gaza. Some of these children have been injured during the conflict or in protests and have injuries such as amputated limbs, gunshot and shrapnel wounds, missing eyes, and nerve damage. Others are living with debilitating illnesses such as cancer and heart disease.

“How can there be any justification anywhere and anytime for stopping children from getting life-saving care?”, said Jeremy Stoner, Save the Children’s Regional Director for the Middle East.

*“These desperately sick children need to leave Gaza to survive – there is simply no other option. It’s cruel that children are dying or suffering extreme pain when they can receive treatment just beyond the checkpoints. With every day that passes, the window to help these children closes further”, *continued Stoner.

Save the Children has long called on the Government of Israel to end the blockade of Gaza on the grounds that it is the root cause of ongoing violations of the most fundamental rights of children. Palestinian and Israeli officials must resume coordination of applications for patients to leave Gaza, and Israel must immediately allow children in need of urgent medical treatment to travel in and out of Gaza, accompanied by a parent.

Spokespeople are available. To arrange an interview please contact:

Restrictions in the eligibility criteria for patients to access essential health services in the context of the COVID-19 outbreak contributed to the lower numbers applying in the first half of May, in addition to patient fears about traveling out of Gaza and the deterrent of quarantine for all those returning after travel also contributed to reduced applications. In the latter part of May, the end to coordination of permits by the Palestinian Authority contributed to the substantially reduced the number of patient and companion permit applications. Despite the low numbers applying during this period, more than a third of patient applications were unsuccessful. See WHO for more information.

[1] According to the World Health Organisation (WHO)

Indian Point is NOT radiologically ready for the Sixth Seal (Rev 6:12)