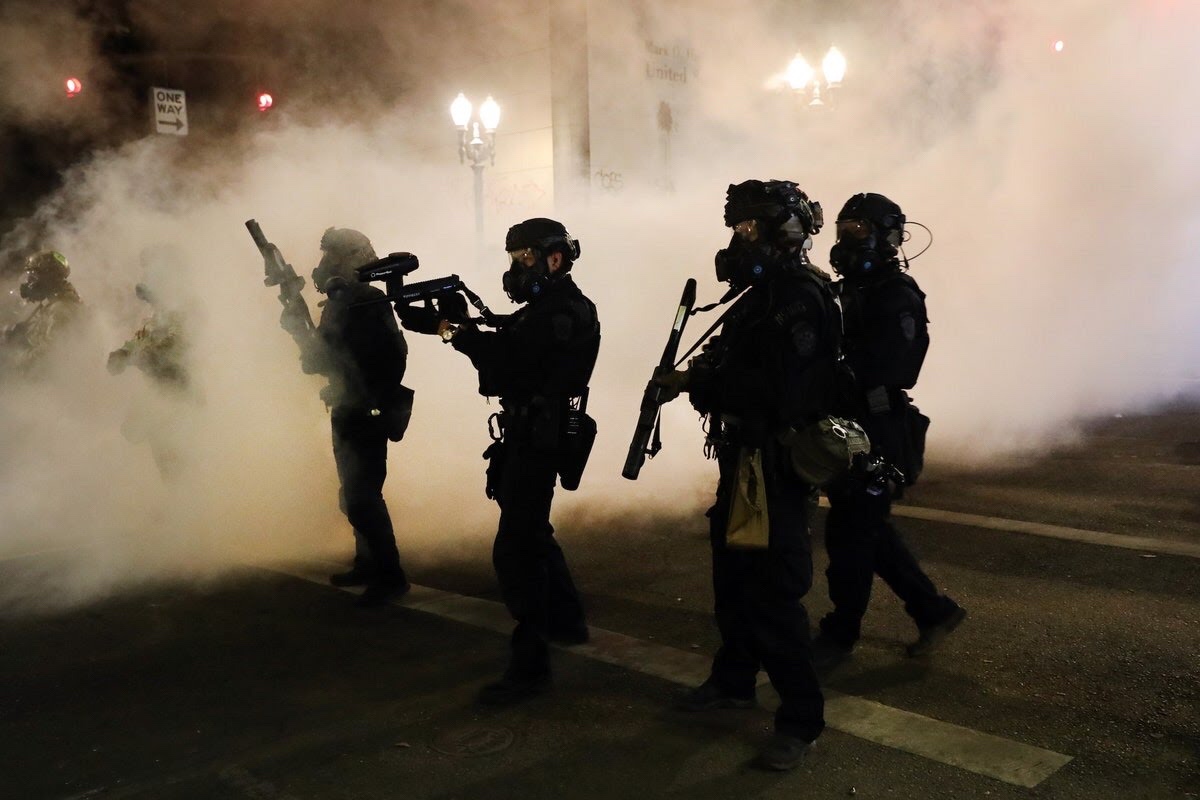 Federal police face off with protesters in front of the Mark O. Hatfield federal courthouse in downtown Portland as the city experiences another night of unrest on July 27, 2020.

When it comes to Donald Trump’s theatrical display of “law and order,” city officials are attempting to put their foot down. In a letter on Monday, leaders of six major U.S. cities—Portland, Seattle, Chicago, Kansas City, Albuquerque, and Washington—implored Congress to make it illegal to send federal agents to cities where they are unwelcome, condemning “this administration’s egregious use of federal force on cities over the objections of local authorities.” The Trump administration, however, maintains that there’s still reason for Department of Homeland Security agents to be in Portland, setting up yet another clash between city officials and the White House. “It is not a solution to tell federal officers to leave when there continues to be attacks on federal property and personnel,” U.S. Attorney Billy Williams said, noting that the federal courthouse in Portland will not be left “unprotected to be destroyed by people intent on doing so.”

Trump deployed DHS agents to quell the city’s so-called unrest around July 4, at which time the Associated Press reported the number of nightly protesters to be less than 100. Since the agents arrived, thousands have taken to Portland’s streets, galvanized by their presence and equipped with protective gear. Protesters have been largely peaceful, though some have attempted to break down fencing protection at the courthouse and have thrown objects at officers. City police responding to a shooting in a park near the protests found a bag full of ammunition and Molotov cocktails. Federal agents have reportedly made 83 arrests so far.

Mayor Ted Wheeler of Portland—who was himself recently doused with tear gas on the frontlines—has spoken out against the federal presence. On Monday evening, he tweeted that he and City Commissioner Jo Ann Hardesty had called for “an immediate meeting” with DHS leadership on site and Acting Secretary Chad Wolf “to discuss a cease-fire and the removal of heightened federal forces.” Some see Wheeler’s vocal opposition as hypocritical, given that he has allowed the city’s police force to use riot-control weapons, like tear gas, on peaceful protesters. Kris Cline of the Federal Protective Service told the AP that he believes local law enforcement should be tasked with protecting the Portland courthouse that federal agents now guard. “If the Portland Police Bureau were able to do what they typically do, they would be able to clear this out for this disturbance and we would leave our officers inside the building and not be visible,” Cline said.

Trump, meanwhile, has claimed that federal properties in the city “wouldn’t last a day” without the deployed officers. And according to the Washington Post, he’s sending in even more. The U.S. Marshals Service decided to deploy more deputies last week, and DHS is planning to send an additional 50 Customs and Border Protection agents. This would be a considerable escalation in the federal presence, a tactic that the Post notes has “exhausted federal resources before it exhausted the protesters.” Federal law enforcement officials reportedly fear that existing personnel will not be able to control the streets, where crowds are growing more aggressive and nightly street battles are gaining more media attention.

Meanwhile, officials and protesters elsewhere in the country fear the same tactics will land on their doorsteps. Aurora Mayor Mike Coffman, per the Post, “worried that his local police were facing protesters who had been radicalized by the clashes they had heard about in Portland” as protests turned violent over the weekend; two people were shot and wounded after a car barreled through a demonstration, and public property was vandalized. “Aurora cannot become a Portland,” he wrote. Other cities where protests are ongoing also saw an uptick in violence this weekend, the AP notes. In Oakland, California, protesters set a courthouse on fire; in Richmond, Virginia, the same was done to vehicles. And an armed protester was fatally shot at a demonstration in Austin, Texas.

Why We Are In Trouble At The Sixth Seal (Revelation 6:12)

Israel bombs outside the Temple Walls as Hamas warns of escalation after Arab deals: Revelation 11

The world is helping the Saudi nuclear horn: Daniel 7