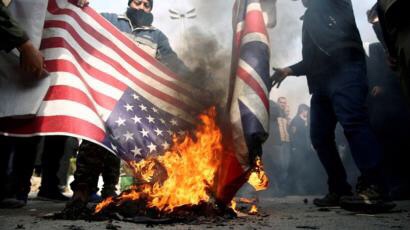 News coming from Iran in recent days are quite unusual and disturbing on many accounts. Traditional Washington-Tehran rivalry seems gaining new vertex in the backdrop of unraveling Iran nuclear deal. It is intriguingly mysterious that some extraordinary damages occurred at two Iranian nuclear sites once US vigorously striving to tighten the noose around Tehran’s neck. Neither the timing of incidents nor the interests of regional players like Israel and KSA, siding by the US, can be ignored. Mike Pompeo’s address to the UNSC urging extension of arms embargo on Tehran met an unexpected preemptive response, in the form of arrest warrant of President Trump, by the Iranian judiciary for murdering General Sulemani. Iran’s effective optics of approaching the Interpol for arrest of Trump and his aides successfully gave a momentary jolt to the US.

As expected, Interpol regretted pursuing the politically-motivated arrest request; however, Iran did its part well to vent the anger against the US. This eye catching move of Trump’s arrest warrant made big headlines in media but couldn’t do any harm to the US. While retaliating to Sulemani’s assassination, Iran’s rocket attacks on military bases in Iraq were also very loud but least damaging to the US. Tehran needs to re-evaluate the existing scenario for the sake of its own survival and much needed regional peace. Unshakable commitment of Iranian leadership to its revolutionary ideology under nerve testing times have been a strength for masses at internal front but at external front the challenges growing exponentially. Damages caused by the rivals to Iranian state apparatus are too serious to repair.

Spillover effects of growing Iranian instability will be nasty for the entire Middle Eastern region. While rightly pointing out the ill effects of foreign interference in the Arab world, Saudi minister of external affairs could not correct his focus towards Iran. So is the case with Tehran where sense of Persian supremacy over Arabs hinders the process of logical decision making. This painful disunity in the Muslim world over racial, sectarian and so called ideological grounds is going in the favor of Israel. While Tehran and Riyadh calling shots to coerce each other in Yemen and Syria, it is Tel Aviv making some serious moves to strengthen its roots in the region.

A temporary pause in implementation of west bank’ annexation plan reflects Israel’s correct assessment of unfavorable scenario. Obviously, Tel Aviv is waiting for the right moment to implement the annexation plan. Unfortunately, Middle Eastern stake holders lack pragmatic approach and flexibility in decision making process. Idea of siding with the foreign forces against neighbors on the false pretext of over exaggerated security threats has proved detrimental to broader unity and honorable survival. Resources rich Middle Eastern countries badly lack in scientific research, sovereign economic management and self-built defence potential. This must be understood that flowing effortlessly at the mercy of tide proved destructively futile for most of the regional stake holders in the Middle East.

The US maneuvering to target Iran with renewal of terms of 2015 Joint Comprehensive Plan of Action (JCPOA), must be questioned specifically by the OIC and Arab League members. Pompeo’s outburst at the UNSC urging extension of arms embargo against Iran was though opposed by Russia and China but no neighboring country joined the chorus. Mysterious explosions and fire damages at two Iranian nuclear facilities within short span of time are hard to be believed as coincidental accidents.

Media reports reveal a possible Israeli and US backed sabotage at Iranian nuclear sites. Satellite spying of Iranian nuclear sites by Israel is further complicating the already grim situation. This aggressive grinding must be viewed in connection with past assassination of Iranian scientists known to be associated with nuclear program. As a sovereign state, Iran’s, right to build and run nuclear facilities for peaceful purposes must be regarded. If Iran is abiding by the instructions of international nuclear watchdog than any US led coercion and ultra-violent persuasion in the absence of authentic evidence will ignite a greater destabilization in the region. Unjustified and highly partial joint US-Israel maneuvering against Iran brings many questions on the neutrality and independence of international forums including the UN.

Both US and Israel face a serious credibility crisis due to their poor track record. Nuclear strikes on Japan and air strike on Iraqi under construction nuclear reactor by US and Israel respectively are enough of evidences to comprehend their venomous ways to deal with sensitive security matters. Decades long, violent coercion has pushed Iran to a limit from where any unpredictable response may blow the fragile peace of entire Middle East. Regional stakeholders should come out of this illusion that by remaining neutral or silent they would be able to avoid the spillover effects.

This situation poses some very tricky problems to Pakistan as well. While battling against terrorism, volatile LoC , burning Kashmir issue, complex Afghan peace process and Indian sponsored separatists now Pakistan has to be more cautious about worsening situation of Iran. The decision makers in Islamabad should not take US footprints in all regional disputes and Israel’s close ties with traditional adversary India casually. Israeli overstepping against Iran’s nuclear program must be correctly assessed and interpreted by keeping special focus on hostile designs of regional and global players towards Pakistan’s nuclear assets. Pakistan should make all possible maneuvers on diplomatic front to reduce tensions in the Middle East by bringing Iran and KSA on dialogue table. Continuation of unrest in surroundings is multiplying the security challenges for Pakistan.

Writer is a freelancer