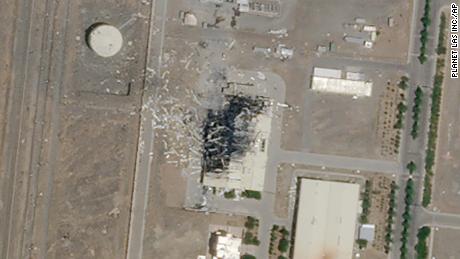 An ongoing, medium-intensity conflict between Israel and Iran strengthens Netanyahu’s argument that he is best-positioned to protect his country’s interests

Over the past week, mysterious explosions and fires have wracked key infrastructure connected to Iran’s nuclear programme at Natanz and Parchin, key facilities engaged in uranium enrichment and the production of rocket fuel for ballistic missiles.

The US and Israel have accused Iran of violating UN resolutions and the nuclear deal in testing new ballistic-missile technology. Although Iranian Supreme Leader Ayatollah Ali Khamenei has repeatedly denied any intent to create nuclear weapons, even going so far as to issue a fatwa against it, Iran’s enemies are convinced it plans to “go nuclear”.

The recent attacks appear to be an attempt by a hostile state to degrade that programme and delay Iran’s ability to potentially send such weapons to targets outside of Iran. Tehran has said that a cyberattack could be behind the explosion at Natanz, which destroyed a building that allegedly housed an advanced centrifuge system that could increase the speed of enrichment by up to 50 times.

According to the New York Times, a “Middle Eastern intelligence official with knowledge of the episode” said that Israel was responsible for the Natanz attack. “The blast was caused by an explosive device planted inside the facility,” the Times reported, citing information from an intelligence source. The explosion “destroyed much of the aboveground parts of the facility where new centrifuges – delicate devices that spin at supersonic speeds – are balanced before they are put into operation”.

Avigdor Lieberman, a rival of Israeli Prime Minister Benjamin Netanyahu, has accused Mossad chief Yossi Cohen of being the source. In a radio interview, he said the leak was a deliberate attempt to embellish Cohen’s resume at the expense of Israeli national security, as he prepared to transition from the Mossad to a political career as Netanyahu’s possible successor as Likud leader.

The latest attacks against Iran could be, at least in part, Israeli retaliation and a warning of the price Iran will pay for such mischief

According to the Times, “while investigators have considered the possibility that Natanz was hit … by a cruise missile or a drone, they view it as more likely that someone carried a bomb into the building”. An unidentified Revolutionary Guard member told the Times that while it was unclear how the explosives were snuck in, “the attack clearly demonstrated a hole in the facility’s security”.

This, together with the fact that a hitherto unknown anti-regime group, the Homeland Cheetahs, contacted BBC Persian hours before the bombing was made public to claim responsibility, points to the possible involvement of the anti-regime Mujahideen-e Khalq (MEK). Israel is known to have executed joint assassination operations with MEK killers on the ground in the past.

According to the Kuwaiti media outlet al-Jarida, an Israeli F-35 stealth jet was used to bomb the Parchin complex. While this is possible, flying an aircraft from Israel to Iran for such an attack would be a technically complex and risky undertaking. Al-Jarida further reported that the fire at Natanz was the result of a cyberattack aimed at gas compression controls.

A decade ago, joint US-Israeli efforts resulted in the development of the Stuxnet worm, which infected Natanz and was inadvertently sent around the world. Stuxnet was reportedly delivered via a USB stick. It’s unclear what method might have been used this time, but presumably the attackers would have been looking to exploit any similar lapses of Iranian cybersecurity.

A possible motivator could have been a thwarted cyberattack on six Israeli water plants in April, intended to cause systems to malfunction. According to a report in the Times of Israel, which cited Channel 13 news, the attack “was viewed as a significant escalation by Iran and a crossing of a red line because it targeted civilian infrastructure”.

As such, the latest attacks against Iran could be, at least in part, Israeli retaliation and a warning of the price Iran will pay for such mischief. Yet, the sheer scale of the attacks indicates a massive escalation in hostilities. Iran would also assume, likely correctly, that Israel informed its closest military ally of its mission, and therefore view these acts as joint US-Israeli operations.

That could explain the latest missile attack on US diplomatic and military installations in Iraq. In an unprecedented move, Iraqi troops last month arrested a group of Iran-backed fighters allegedly plotting a new attack against the Green Zone in Baghdad. Washington has blamed pro-Iranian militias for rocket attacks targeting US troops across Iraq in recent months.

Israel and Iran have played out their rivalry in Iraq before. Iran will undoubtedly seek to exact revenge on Israeli or US assets wherever it can find them. This is no longer a game of cat-and-mouse; it is only a matter of time before one or more of the parties accidentally or intentionally tips the situation into an outbreak of massive, unrestrained conflict.

The timing of these developments could prove extremely useful for Netanyahu, coming in the midst of his corruption trial. If convicted, Netanyahu could be forced to resign, possibly ending his political career. One of the wiliest of Israeli politicians, Netanyahu would not be above mounting attacks to buttress the notion that he is an indispensable leader protecting Israel’s security by eliminating grave threats, such as those posed by Iran.

Furthermore, Netanyahu’s grand plan to annex 30 percent of the occupied West Bank has incited a firestorm of opposition around the globe. Denunciations and warnings have come from political leaders, international diplomats and human rights groups. The Trump administration, thought to have offered full support for the plan, seems now at cross-purposes, with hardliners such as Ambassador David Friedman backing annexation and adviser Jared Kushner urging caution.

Iran and Israel: A tale of conflicting PR strategies

Former Israeli Knesset Speaker Avraham Burg even told an Italian newspaper that the US was responsible for halting annexation (for now). If he is correct, then the explosions in Iran would be just the ticket to distract public attention from yet another failure by Netanyahu to implement policies favoured by his ultra-nationalist constituency.

These attacks are also characteristic of Israel’s strategy to avoid comprehensive solutions to intractable issues and instead engage in half-measures, aptly known in Israeli idiom as “mowing the grass”.

Iran analysts and nuclear experts say these attacks do not fundamentally alter Iran’s trajectory if it is seeking nuclear capabilities; at best, they delay progress by a few months or a year. There is no way, short of regime change or armed invasion, that countries can deter rivals determined to obtain nuclear weapons.

Informed Israeli sources have repeatedly said Netanyahu never intended to attack Iran on the scale necessary to deal a massive blow to its nuclear programme. At best, these operations only delay the inevitable – and this may be exactly what Netanyahu wants. An ongoing, medium-intensity conflict between Israel and Iran strengthens his argument that he is the only figure who can protect Israeli interests.

The views expressed in this article belong to the author and do not necessarily reflect the editorial policy of Middle East Eye.