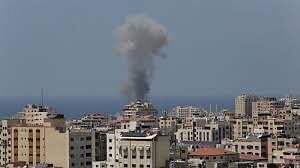 JERUSALEM: The Israeli military has said that it struck Hamas sites in the Gaza Strip in retaliation against rocket attacks by Gaza-based militants. Attack helicopters and fighter jets hit Hamas targets in the northern Gaza Strip, including “underground infrastructure”, Xinhua news agency reported on Monday citing an Israeli military spokesperson as saying in a statement. There were no immediate reports of injuries.

On Sunday evening, militants in the besieged Palestinian enclave launched three projectiles at southern Israel, one of which was intercepted by the Iron Dome anti-rocket system, according to the army. The other two exploded in an open field, causing no injuries.

No group claimed responsibility for the rocket attacks but the military said it considers Hamas, a group that runs Gaza, “responsible for all events transpiring in the Gaza Strip and emanating from it”, warning the Islamic movement “will bear the consequences for actions against Israeli civilians”. (IANS)