BUCHANAN, N.Y. — Every so often, catastrophes prompt fresh worries about the Indian Point nuclear power plant, whose twin domes loom over the Hudson River about 45 miles north of Midtown Manhattan.

In 2001, the terror attacks on Sept. 11 spurred calls to shut down the two reactors here, amid concern of a similar attack on the plant. Five years ago, the Fukushima nuclear accident in Japan raised fears about the impact of a natural disaster on Indian Point.

Now, a construction project — the planned expansion of a natural gas pipeline across Indian Point property — is again putting the power plant in a harsh glare. Elected officials, residents and environmental activists have criticized the project, saying that a rupture of the pipeline could unleash a nuclear catastrophe.

Federal regulators have already approved the pipeline expansion, and Spectra Energy, the company overseeing the pipeline project, has begun construction along parts of its 1,000-mile line running through New York, Connecticut, Rhode Island and Massachusetts. In Westchester County, work has begun on the pipeline, including at the 240-acre Indian Point site, where Spectra plans to replace its existing 26-inch wide pipeline with one measuring 42 inches wide.

In recent months, Senators Chuck Schumer and Kirsten E. Gillibrand, both New York Democrats, as well as other federal, state and local officials, have demanded an independent safety evaluation of the risks posed by the pipeline expansion at Indian Point. The project’s approval by the Federal Energy Regulatory Commission was based in part on an analysis conducted by Entergy Corporation, which owns the power plant, and the Nuclear Regulatory Commission, which determined that the plant could continue to operate safely in the event of a rupture or could be temporarily shut down.

On Monday, the state plans to notify the Federal Energy Regulatory Commission that it will take a hard look at the project in light of a series of problems at the nuclear plant since last May. In addition, the state will ask federal regulators to suspend their approval of the project — effectively halting construction — until the study is completed.

“I am directing my administration to commence an immediate independent safety analysis of the natural gas pipeline project,” Gov. Andrew M. Cuomo, a Democrat, said. “The safety of New Yorkers is the first responsibility of state government when making any decision.” 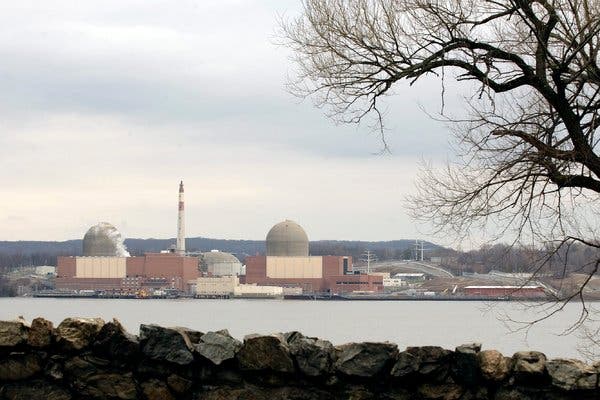 So far, federal agencies have declined to conduct independent assessments of their own. Neil Sheehan, a spokesman for the Nuclear Regulatory Commission, said a specialist within the agency had looked carefully at hypothetical accidents. “Our expert confirmed that both units could safely shut down, even if the pipeline were to rupture and a blast of flame were to come from that line,” he said.

But the Union of Concerned Scientists, an advocacy group, has asked Stephen G. Burns, the regulatory commission’s chairman, to evaluate the methodology used by its own staff. “It is not sufficient to have the right answers until all the right questions have been asked,” David A. Lochbaum, director of the group’s Nuclear Safety Project, wrote in a letter in August. Mr. Burns declined the organization’s request.

Officials from both Spectra Energy and Entergy, which will receive a one-time payment for use of the right of way on its land, say that the new pipeline will be located several hundred feet farther away from the nuclear reactors than the smaller, existing pipeline. Jerry Nappi, a spokesman for Entergy, said the new pipeline would cross the southeast corner of its property, about 1,200 feet from the Unit 3 reactor.

In addition, he said, the larger pipeline would be buried deeper than the existing one and would be covered by thick concrete slabs.

Environmental activists from New York City and Westchester County are not mollified by those precautions. Since Spectra was given the go-ahead to proceed with construction, they have gathered 30,000 signatures on a petition demanding that Mr. Cuomo stop the project and study the risks.

Mr. Cuomo has been vociferous in his demand that federal regulators not relicense Indian Point. (The reactors’ licenses expired in 2013 and 2015, and the Nuclear Regulatory Commission is now considering their renewal.) But until now, Mr. Cuomo has been largely silent about the pipeline.

Spectra, based in Texas, is expanding sections of its so-called Algonquin Pipeline in several states to increase delivery of natural gas to meet what the company says is growing demand in New England. Besides safety concerns, critics of the pipeline also say that enhancing the delivery of fossil fuels like natural gas will hurt efforts to counter climate change.

The Massachusetts attorney general, Maura Healey, last fall released an energy report of the region. “This study demonstrates that we do not need increased gas capacity to meet electric reliability needs and that electric ratepayers shouldn’t foot the bill for additional pipelines,” she said, adding that increasing energy efficiency would “significantly reduce greenhouse gas emissions.” 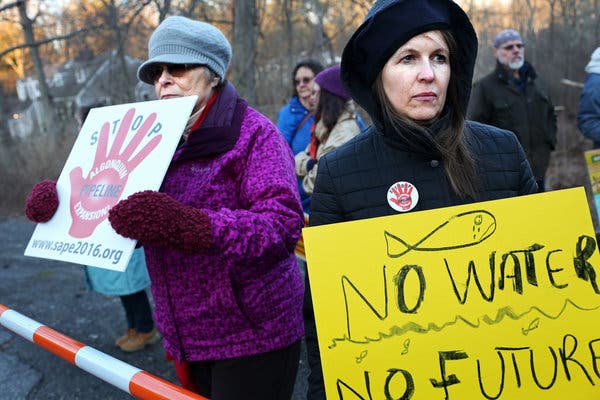 Problems have bedeviled Indian Point for years, sometimes leading to the temporary shutdown of its reactors. In May, a transformer fire knocked out one of the reactors and spewed oil and fire-retardant foam into the Hudson. This month, Entergy revealed that radioactive water was found in three of 40 monitoring wells on site, the result of contamination from tritium, a radioactive isotope.

In recent months, activists have turned up the intensity of their protests against the pipeline expansion. Members of faith organizations and environmental groups held a vigil on Saturday outside the house in Mount Kisco, N.Y., that Mr. Cuomo shares with his girlfriend, Sandra Lee. Their home is less than 10 miles from Indian Point.

Activists have also held rallies and engaged in acts of civil disobedience. In November, nine people joined hands and blocked a road near a site where some of Spectra Energy’s construction equipment and vehicles were stored in Montrose, a hamlet in the town of Cortlandt, not far from Indian Point.

The activists were arrested and charged with disorderly conduct. The defendants, who call themselves the Montrose Nine, are awaiting trial. “They felt it was their obligation to stop the construction of what they believe is an extraordinarily dangerous venture,” Martin R. Stolar, their lawyer, said.

A group called ResistAIM, which stands for the Algonquin Incremental Market project, as Spectra calls the expansion, has organized periodic workshops on the ABC’s of civil disobedience.

“We organize nonviolent direct action to stop the AIM pipeline from being built,” its website says. “We do this because it is clear that we have no other alternative — we have tried everything to get the attention of elected officials and to use regulatory channels, and Spectra is building the pipeline anyway.”

Patrick Robbins, co-director of Sane Energy Project, which advocates renewable energy, also works with ResistAIM. He contends that continued resistance to the pipeline project, despite the fact that it has the needed approvals, was not fruitless. Indeed, he and others are focused on the larger war against fossil fuels, more than any one battle.

“Every day you stop construction, it hurts their timetable,” he said, referring to Spectra Energy. “And it sends a message to other companies, investors and political officials that the landscape has changed on building these pipelines, and that it’s not going to be an easy fight for them.”