Skip to content
andrewtheprophet Uncategorized February 19, 2020February 19, 2020 2 Minutes
The warhead of a rocket-propelled grenade, which appears to have been flown into southern Israel from the Gaza Strip, is found outside the community of Alumim on February 18, 2020. (Courtesy)

What appeared to be the warhead from a rocket-propelled grenade attached to an inflated bag was found in southern Israel on Tuesday, apparently flown across the border from the Gaza Strip.

The warhead was found outside the community of Alumim and was attached to what appeared to be a large plastic bag filled with helium.

According to Hebrew-language media reports, police sappers were called to the scene to deal with the device. 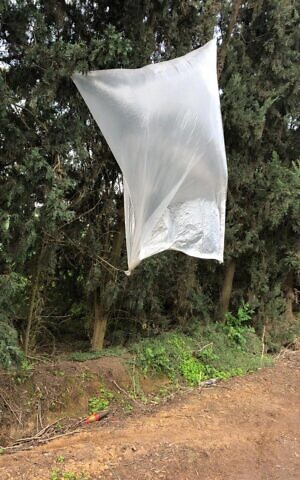 Prime Minister Benjamin Netanyahu on Sunday met with mayors from the south over the ongoing violence around the Gaza Strip, and again warned that Israel could launch a military operation against Palestinian terror groups in the enclave before the March 2 election.

The premier’s statement came hours after a girl in Moshav Shuva east of the Gaza Strip found an explosive device in her yard that appeared to have arrived via balloon from the Hamas-controlled enclave.

Also on Sunday, part of Route 6 was closed to traffic by police after a suspicious object was found on the highway.

Palestinian terrorists in the Gaza Strip began flying explosive and incendiary devices into Israel using clusters of balloons and kites beginning in 2018. The practice has waxed and waned over that time, but has picked up considerably in recent weeks, with dozens of such balloon-borne bombs landing in towns and farming communities adjacent to the Palestinian enclave.

Over the weekend, the IDF attacked targets in retaliation for rocket strikes against Israeli towns.

The army later announced that it had canceled the reissuing of some 500 permits allowing businessmen out of Gaza, an increase of the size of the permitted fishing zone, and an agreement to allow cement to be imported into the Strip. These measures had been agreed to by Israel in exchange for the cessation of attacks, an Israeli defense official told reporters on Thursday. 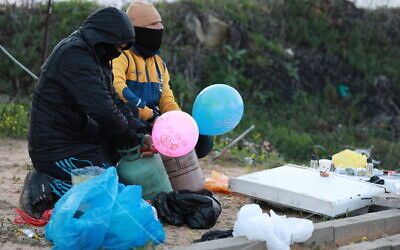 Saturday’s rocket fire came amid reports of an emerging ceasefire between Israel and terror groups in the Strip. The potential breakthrough between Israel and the terror group came after the Egyptian military and the United Nations intervened last week, sending in delegations on Monday and Wednesday, respectively, according to Palestinian reports.

A Hamas official told a Lebanese newspaper on Saturday that the terror group had only decided to reduce the number of incendiary balloons launched toward Israel, not stop them entirely.

This came after an Israeli defense official told reporters that Hamas had “sent messages to Israel that they’d decided unilaterally to stop launching balloons and rocket fire at Israel.”

The Lebanese pro-Hezbollah Al-Akhbar newspaper, citing an unnamed Hamas official, said that the number of launches would be reduced only after Israel met the group’s demands.

What will happen when the Sixth Seal hits

Iran will activate proxies, up nuclear activities amid coronavirus

The Antichrist Is Courting Irrelevance in Iraq

Babylon the Great Prepares for War with Iran